The Catalan government has today paid homage to the political prisoners, with a solemn ceremony in the Generalitat Palace's gothic gallery, the setting chosen for the most important occasions. The entire current Catalan cabinet, headed by president Pere Aragonès, received the nine pro-independence prisoners, released following last week's partial pardons. Six of the nine are former members of the Catalan government.

The event, which was also attended by the speaker of parliament, has taken place on the eve of the meeting that Aragonès is to hold with the Spanish prime minister, Pedro Sánchez, tomorrow in Madrid's Moncloa palace.

In the president's address, he listed the prisoners one by one: vice-president Oriol Junqueras, the ministers Jordi Turull, Josep Rull, Raül Romeva, Dolors Bassa and Quim Forn, the speaker of parliament Carme Forcadell, the president of Òmnium, Jordi Cuixart, and the former president of the ANC, Jordi Sànchez. There were also empty chairs: places reserved for president in exile Carles Puigdemont and ministers Toni Comin, Clara Ponsatí and Lluís Puig, as well as ERC secretary general Marta Rovira and former CUP deputy Anna Gabriel.

"You have given everything to make it possible for Catalonia to decide its future through a referendum on self-determination," Aragonès said, addressing the prisoners, and affirming that what they did was honest and noble, a fact which allows them to leave prison with the peace of mind of those who do not have to apologize for anything.

The Catalan president guaranteed that his government sees it as its duty to persevere until the state's repression ceases altogether, and thus he assured that the executive will stubbornly continue to do everything possible to "achieve an amnesty and self-determination." "Because our commitment to the people, to the will of the majority of the citizens of Catalonia is inalienable. Your freedom makes us stronger," said Aragonès, who ended by proclaiming: "Have no doubt that we will win again."

Speaking on behalf of the prisoners, the former speaker of parliament Carme Forcadell said she was very happy to be at the Generalitat palace, "finally at liberty". "Without the electoral victories of the independence movement and without the political and judicial victories in Europe today we would not be here," asserted Forcadell, who expressed her gratitude for the support of the public who mobilized to demand their release. 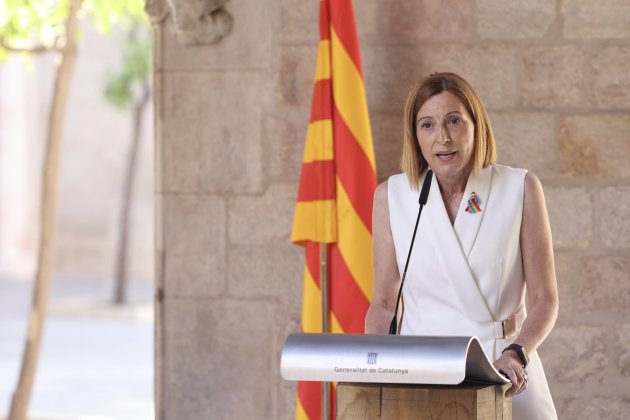 Puigneró: "The only struggle lost is that which is abandoned"

Earlier, Catalan vice president Jordi Puigneró spoke, warning the Spanish government that "concord is incompatible with repression". "We will never forget what you have lived through and suffered", he told the prisoners. "Your sacrifice will not have been in vain."

Puigneró, recalling that tomorrow the Spanish state will "bill them" in reference to the summonses by the Court of Accounts, said that "the 1st October referendum was neither a mistake nor a crime and for this reason the government will persist until it achieves an amnesty." “The only struggle that is lost is the one that is abandoned,” he asserted.

In the main image, the Catalan government with the political prisoners / Sergi Alcázar