On July 21st, the deadline expires for the 34 former senior officials in the Catalan administration who are required by Spain's Court of Accounts to pay the sum of 5.4 million euros, claimed as the total of the Catalan government's spending on improper foreign policy action between 2011 and 2017. If they do not pay the sum, their property will be seized until the total is reached, as happened previously with another set of Catalan ministers - Mas, Ortega, Homs and Rigau - for the spending on the 2014 independence consultation. This time, the Catalan executive decided to make a move to protect the personal assets of the public officials involved through a decree law that will have to be validated in Parliament, to create a Complementary Risk Fund that will depend on the Catalan government and will have an initial endowment of 10 million euros, with the aim of “protecting all public servants” and dealing with judicial or administrative claims against public workers and senior officials. It is a complex financial formula under which the Catalan government becomes responsible for covering the astronomical sanctions demanded by the Court of Accounts. However, under the proposal, a right is reserved to claim a full refund of the money advanced if a final court decision confirms the tribunal's ruling.

The solution has been developed by the economy ministry (in the hands of the Junts party) and has the endorsement of the Government's legal advisors, which are part of the presidency area (under ERC), as well as broad participation. The two ministerial heads responsible for these areas, Jaume Giró - as a former director of banking giant La Caixa, an expert in the financial field - and Laura Vilagrà, appeared this Tuesday to present the proposal. What was finally approved at today's cabinet meeting is a balance between the desire to protect those affected and ensure that the executive's response does not incur in any irregularities that invalidate it and put at risk the leaders and officials of the current Catalan government. However, Generalitat sources do not rule out that groups such as Popular Party and Ciudadanos will lay complaints for alleged misuse of public funds. The proposal, explained Vilagrà, is based on the principle that every official has the right to effective judicial protection from the administration.

"With the insurance policies taken out by the Catalan government, there were a number of risks that were not covered," said minister Giró. Until a governing body is created for the new fund, it will be managed by the Catalan Institute of Finance (ICF).

The conditions for requesting coverage from this fund are that there must be no final court decision declaring the actions of the affected person illegal, that the risk is not already covered by other insurance policies of the administration and that the Catalan government has not initiated any action against the accused person. Those who want to benefit from the fund will have to apply stating whether these premises are met. If the request is accepted, the ICF will ask a financial institution to issue a guarantee for the amount. That is, there will be no direct guarantee provided by the executive, but rather the government would act as a counter-guarantor.

"There is no transfer of money from the Catalan government at any time," Giró stressed. A way to legally shield the plan from possible attacks from parties such as Cs, Vox or the PP. In fact, the decree which has been moved provides that "in the case of a final court judgment, with no further legal recourse available, if an accounting liability is demonstrated, the beneficiary will have to return the money to the administration, with interest and additional costs." Faced with questions about possible misuse of funds accusations, the economy minister answered that "it is constructed in such a way that it guarantees that no misappropriation of public money takes place." Although it has not been specified which budget item the planned 10 million euros will come from, it has been reported that the ICF will use a part of its resources to be able to manage the guarantees. 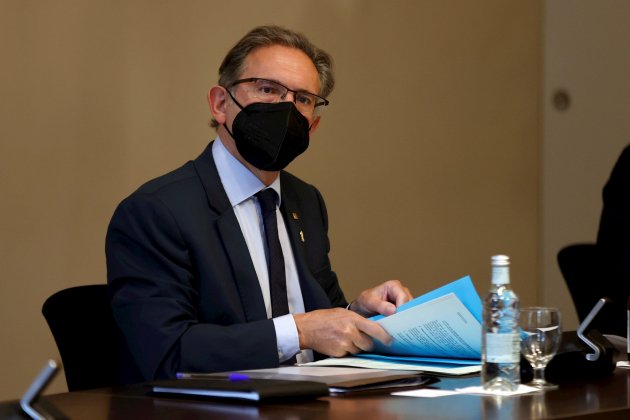 During the press appearance after the meeting, the ministers along with government spokesperson Patrícia Plaja sought to clarify that the return of the sum covered by the fund would not be requested during the entire judicial process until the final sentence arrives. "If they are found guilty, the Catalan government will recover the money," said Giró, who emphasized his confidence that this would not end up happening, because so far European authorities have overturned the sentences handed down by the Spanish judiciary.

Votes of the Comuns

Sources in the executive explained to ElNacional.cat, that the chosen option, a decree law, seeks to give more solidity to the legality of the response, because in addition to the executive, it will have the support of the legislature. Passing the plan through Parliament will allow the spectrum of forces supporting it to be broadened. The intention is for the left-wing Comuns to join and, if possible, for the Catalan Socialists to be able to at least abstain. The text approved has the signature of both president Pere Aragonès and economy minister Giró.

Since the Court of Accounts imposed its massive bond payments, the two Catalan governing parties have come out in favour of providing support for the defendants. Junts has been vehemently demanding financially backing for those affected by the case, while ERC has opted for a more cautious attitude, at least until a proposal is closed. At the same time, the executive is asking for the independence solidarity fund to be reactivated - and this Tuesday afternoon, an announcement will be made to that effect, on a "just in case" basis, for the contingency in which the government's guarantee plan is not accepted. The Catalan National Assembly's demand was that the government should take the lead in protecting those holding posts in the institution.

A counter by the Court of Accounts?

Madrid media outlets have reported this Tuesday that the Court of Accounts could reject the guarantee coming through the Catalan government, because it would consider it as evasion of the law. Sources from the Madrid-based body indicate that, since the Catalan government is the party harmed in this case - even if that government insists that it is not claiming anything - then for the bond amount to be covered with money from the Catalan public administration would be understood as an irregularity.

It will be the investigating delegate for the case, Esperanza García, who will have to determine the validity and legality of the Catalan government proposal. An appeal may be lodged against her decision before the trial court, although this would not stop the corresponding asset seizures.

Arthur Mas's apartment, up for auction

Just last week, the Supreme Court dismissed the appeal made by former Catalan president Artur Mas, his ministers and six other senior officials of his government, against the Court of Accounts ruling which ordered them to pay 5.2 million euros - including interest - for the 2014 consultation. Thus, the properties owned by the ex-president and the rest of those affected, which until now had been held as bail bonds, are now able to be disposed of by the state to recover the funds. The solidarity fund covered 2 million of the 2.2 million claimed from the 2014 Catalan government.

In the main image, Jaume Giró and Pere Aragonès in Parliament. / ACN