A Catalan civil rights march, proposed by Torra at homage to jailed Rull

Quim Torra has proposed a march for the civil and national rights of Catalans, along with their right to self-determination. On Sunday, at a homage to imprisoned pro-independence minister Josep Rull in the Catalan city of Terrassa - on the occasion of Rull's 50th birthday - president Torra introduced some of the matters he will discuss in his major address planned for Tuesday, and also called for unity. "If we are united, when we do it, we'll win, you should have no doubt, no fear about this," he said.

The Catalan president said that the independence cause will win because "we are on the right side of history" and because the Catalan people "don't know how to do things any other way" except "peacefully" and "democratically". He also criticized the judicial process against the leaders who took Catalonia to the referendum, describing the case as "a farce." "It is a disgrace which we have to fight, together", he said. 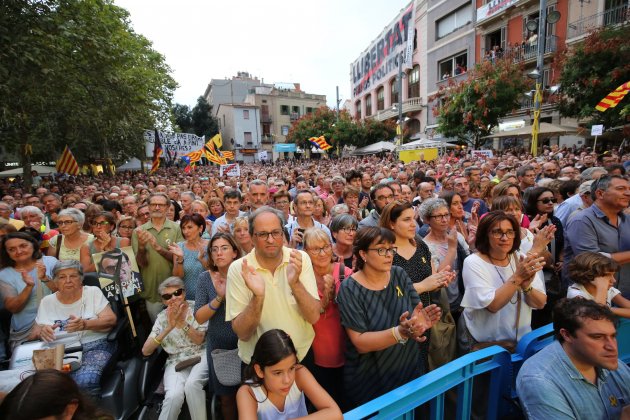 In an event with a festive atmosphere, with more than a thousand people celebrating the birthday of the imprisoned minister Rull, the Catalan president also encouraged Terrassa locals to attend this year's Diada march on September 11th, and asked them that over the coming weeks they keep in their minds the "humanity", "commitment", "smile" and "patriotism" of Josep Rull.

As well, the jailed minister's wife, Meritxell Lluís, addressed the gathering to read the words that Josep had written from Lledoners prison. In the letter, Rull thanked those who had come to the party and stated that the imprisoned politicians will not have a "fair trial" in an "impartial" court.

However, Rull assured supporters that the prisoners will not be silenced and that their commitment to the freedom of Catalonia is "unbreakable" while thanking people for their "tireless" and "peaceful" mobilization. "Thank you very much for this extraordinary gift," he concluded.

Music and cultural activities were the stars of the event. Terrassa's three human-castle groups all took part and several musical groups played. Chants of "Freedom for the political prisoners" repeatedly interrupted the speeches. Finally, the event ended with the singing of the Catalan national anthem and a moving video in memory of all the imprisoned and exiled pro-independence leaders.

Terror Attack Man who lost his son in Barcelona attack, to the king: "Let the political prisoners go" Nicolas Tomás