Borrell admits: there is no EU intelligence report linking Puigdemont with Russia

A crystal clear response from Josep Borrell, high representative of European Union foreign affairs, on behalf of the European Commission: he has denied official EU authorship of an alleged European intelligence report linking Josep Alay, office manager for Catalan MEP Carles Puigdemont, with Russian intelligence, as claimed in a report published by The New York Times. The report was one of the key sources on which the Times story was based.

Following the publication of the article by the US daily three months ago, Carles Puigdemont, along with fellow pro-independence MEPs Toni Comín and Clara Ponsatí, lodged a question for the European Commission asking for explanations on this alleged report, which asserted that people in Puigdemont's circles had had contacts with Russia. Now, the Commission has responded to the former Catalan president with the declaration that the "European Union Intelligence and Situation Centre (EU INTCEN) is not the author of the report mentioned in the New York Times article", adding: "EU INTCEN does not know who authored the report in question."

The Commission's response has been shared on social media by the MEPs political group, Junts and Lluires per Europa. 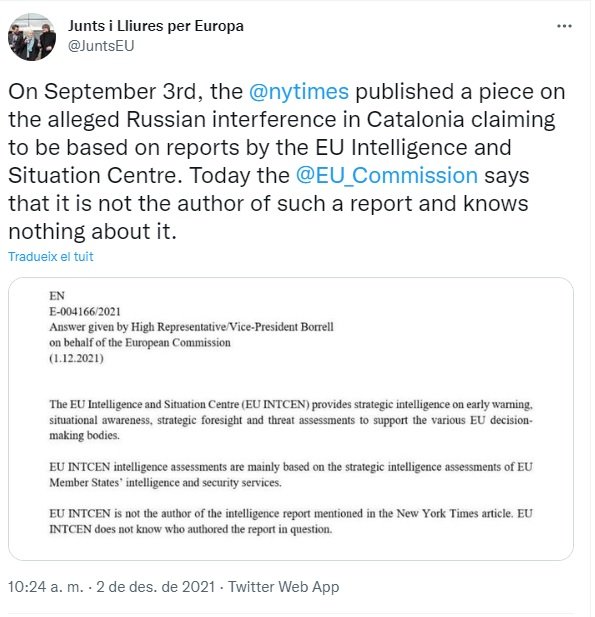 Meanwhile, Josep Alay also shared the European executive's response on social media. In a Twitter thread, Alay states that "from Spanish judges, police, politicians and journalists who are fans of unsubstantiated narratives, I could expect anything. What I am most surprised and ashamed of is that some Catalan politicians and journalists accept as fact the narrative fabricated by the state sewers." 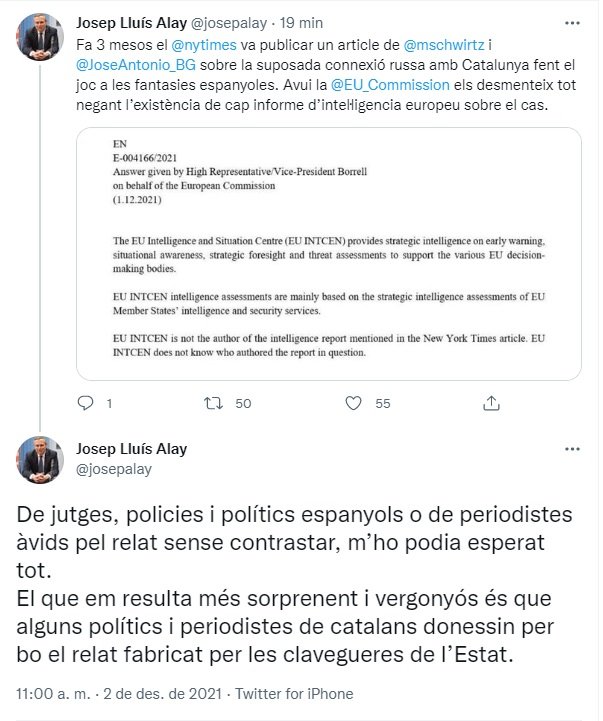 Response to the Times report

The publication of the prestigious newspaper's report in September, signed by correspondents Michael Schwirtz and José Bautista in Barcelona, generated great controversy. Carles Puigdemont himself said: "When propaganda penetrates the reference points of independent information, democracy suffers and it ends up helping authoritarian regimes, because it whitewashes their practices."

The disappointment with the The New York Times story was based on what was left out of an apparently-detailed report on Alay's trips to Russia, which included interviews with Andrei Bezrukov, a former Russian intelligence agent, who inspired the series The Americans centred on two Russian spies in deep cover in the United States during the Cold War.

The Times failed to mention the fact that the prosecutor had dismantled the arguments of the judge for investigating the supposed-irregular financing links of Russian origin. The newspaper's report contained material from the mysterious European intelligence report as well as the leaked Spanish Civil Guard's report to the judge. However, after giving vivid details of clandestine agreements, the Times article admitted that the alleged aid that the Kremlin offered to independence was not clear, if indeed it had really existed.

In November, the Civil Guard report, whose content had already been seen skeptically by prosecutors, was exposed as the source of a new "clanger". The Civil Guard included in its information on Alay the first pages of a book entitled "The undercover agent's secret", originally written in Russian and which Alay, as an historian and linguist, was translating to Spanish and Catalan. The Civil Guard, however, alleged in its report for the judge that it was a Russian intelligence report which proved the Catalan's connection with Moscow's secret service.