The controversial report by The New York Times on alleged Russian interference in Catalonia is largely based on a mysterious "European intelligence" report on which there is very little information. That is why the three Catalan MEPs for the Junts party have registered a series of questions for the European Commission in an attempt to clarify some basic doubts about a document that is being used to attack Carles Puigdemont and his political allies.

The MEPs Carles Puigdemont, Toni Comín and Clara Ponsatí want to know "what (Brussels) knows about the European intelligence report quoted by The New York Times on the alleged Russian interference in Catalonia", as well as whether the European Union's Intelligence and Situation Centre (EU INTCEN) is the entity "responsible for the report", and if so, "with what mandate" the document was compiled and "on whose orders" is an investigation of the team of a Member of the European Parliament being carried out?".

"We await responses," the official profile of the party Junts i Lliures per Europa said on Twitter. It also criticized the text published by the American newspaper: "The piece tries to defame the Catalan independence movement by relating it to an alleged Russian plot to destabilize the European Union." "To bring together alleged contacts between Russia and Puigdemont's lawyer (Josep Lluís Alay), the NYT has drawn on a ten-page European intelligence report, the substance of which was confirmed by two Spanish officials," Junts added in a text in English that was disseminated with the questions.

The MEPs note that "the only European intelligence agency operating under the framework of the European Union is EU INTCEN". "This body provides intelligence analysis to [EU foreign policy chief] Mr Borrell, based on the operative intelligence provided by member state agencies," they explain. 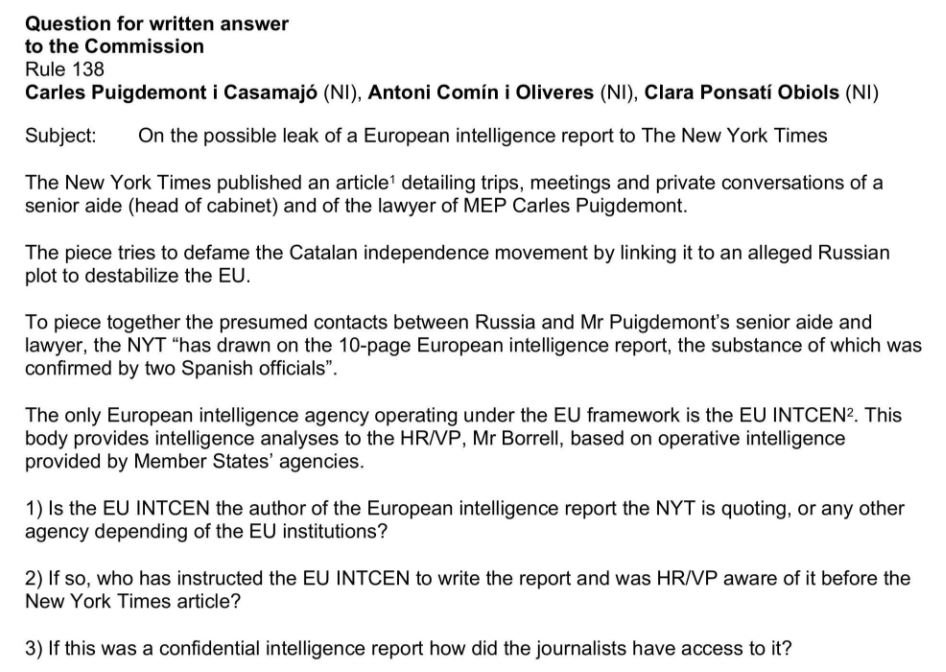 Accordingly, Puigdemont, Comín and Ponsatí ask the following questions. First, whether the EU INTCEN or any other agency that depends on the institutions of the European Union is "the author of the European intelligence report that the NYT quotes?" Then, "if so, who instructed EU INTCEN to write the report?" and whether Mr Borrell "was aware of it before the New York Times article." Finally, "if it was a confidential intelligence report, how did journalists have access to it?"

These questions come after Josep Lluís Alay demanded before the Barcelona court conducting the investigation that the origin of the journalistic leaks that were published last week​, which assert Russian interference in the Catalan independence process, should be probed.

The PSC calls for Alay's appearance

In addition, on this question, the Catalan Socialist party (PSC) has also registered a request for the appearance of the head of president Puigdemont's office before the Catalan Parliament in Barcelona. The Socialists want Alay to give explanations for the alleged contacts he maintained in the Russian capital with "Russian authorities, as well as intelligence agents and the grandson of a KGB spy".