Borràs: "A provocation" to arrest Costa on anniversary of Catalonia's UDI

Scarcely a single anniversary of the Catalan independence movement goes by without a counteroffensive or gesture. Exactly four years after the date on which Catalonia made its unilateral declaration of independence (UDI) in 2017, the former deputy speaker of the Catalan Parliament, Josep Costa, was arrested by the Mossos d'Esquadra on instructions from the Catalan High Court, to whom he was handed over in the context of the judicial investigation of the Bureau of Parliament for allowing two parliamentary debates: on the Spanish monarchy, and on the right to self-determination. And thus, his arrest for several hours today was by no means "a coincidence", according to the speaker of parliament, Laura Borràs.

As soon as she received a call from Costa himself explaining that he had been arrested, Borràs and members of ERC and the CUP travelled to the court in Barcelona, from where they made statements to the press. "We don't see it as any sort of a coincidence that the date of his arrest is today. Arresting him today is a provocation," said Borràs.

She explained that, concerned to know Costa's personal situation, she went to the TSJC and requested on an institutional basis to be able to visit him, but, as she reported, the president of the court did not allow her to enter the building. She assured that the arrest "has no basis in rights and freedoms" and that Costa's lawyers and he himself would denounce that fact.

Also highly critical of the arrest of Costa was Alba Vergés, who is his successor as deputy speaker of the Catalan chamber. Vergés had also travelled to the doors of the TSJC, and asserted that the arrest is a "further example of the fact that the repression does not cease" and that the general case against the independence movement is again focused today against the Bureau of Parliament.

The ERC MP affirmed that this arrest signifies "interference in the institutions", and stated that behind all this repression there is a will to attack Parliament, where people don't want "either democracy or the right to speak" to be exercised. Due to all of this, "because of all the cases and repression," she once again demanded an amnesty law to end the prosecution of all indepedence movement cases. 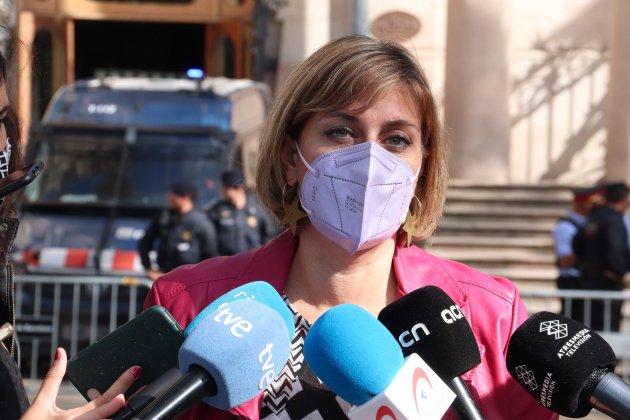 In turn, the third deputy secretary of the Bureau, Pau Juvillà (CUP), reiterated that it is no coincidence that the arrest is taking place on 27th October, and denounced that the arrest is a new attempt to curtail the collective freedoms of the people: "They don't scare us and we won't shut up," he concluded.

Also speaking outside the Barcelona courthouse, the president of Òmnium Cultural, Jordi Cuixart, demanded the immediate release of Costa and called on the independence movement to maintain a common front because the repression seeks division: “We want to denounce the curious way that the state has of showing its desire for dialogue”.

As well as the Òmnium leader, the president of the other major pro-independence NGO, Elisenda Paluzie of the Catalan National Assembly, also made a press appearance railing against the continued repression of the independence movement, asserting that Costa had previously "refused to recognize Spanish justice due to the resolution of self-determination that the Catalan parliament has passed." She noted that the "four years since a declaration of independence which was not activated" have been "four years of repression". The only solution to end the repression was to "return to a rigorous and determined path towards independence."

Costa's arrest comes after he refused to testify on September 15th. The former deputy speaker of the house tried to get the Spanish Constitutional Court to suspend the case so that it could be transferred to the European Court of Human Rights. However, the Spanish court made no resolution on the interim measures he requested and therefore the judicial wheels continued to turn against members of Parliament's Bureau, under speaker Roger Torrent, for allowing parliamentary debates on the monarchy and self-determination in November 2019, despite the warnings from the chamber’s lawyers that they might violate the Constitutional Court’s ban. 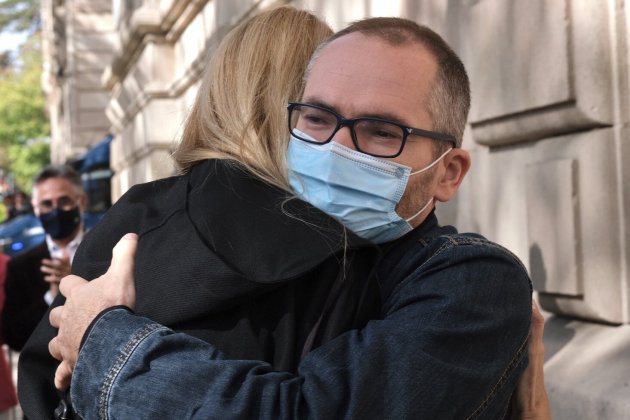 The former deputy speaker Josep Costa emerged from the court just before 3pm, having made use of his legal right to refuse to testify before the judge Maria Eugènia Alegret.

Costa spent 10 minutes before the judge, who then released him. Josep Costa left through the main door of the Palau de Justícia once he has finished. The former deputy speaker had appeared in the court without his lawyers and exercised his own defence, although his lawyer Gonzalo Boye tried to demand his so that he could another day given the absence of the lawyers.

In the main image, Josep Costa after emerging from the TSJC / Carlos Baglietto