US business media giant Bloomberg has warned that the flight to exile of former Spanish king Juan Carlos I has once again shown up the country's "constitutional cracks", and is providing the energy for "a new pro-independence push in Catalonia", as the independence movement once again sees that it has a chance. There is a risk for the Spanish establishment, says the business news article.

"The public humiliation of the 82-year-old former king is driven by a desperate effort to shore up the Spanish monarchy: Felipe VI, the present ruler, has been battling for months to isolate himself from his father’s mounting legal problems," says Bloomberg, introducing the current crisis. But the article then adds that the stakes are wider. Noting that it was only three years ago that the Catalan independence movement tried to force a break with Spain, it argues that the current situation is giving "fresh encouragement" to those who believe an independent Catalan republic would be an improvement.

Bloomberg sees that the debate on the monarchy could trigger "a broader debate on the constitution", and thus reopen the "scars" in Catalonia. As well as mentioning that this would polarize Spain politically, the article quotes possible economic effects in Spain on "government bonds, stocks, business and foreign investment”. 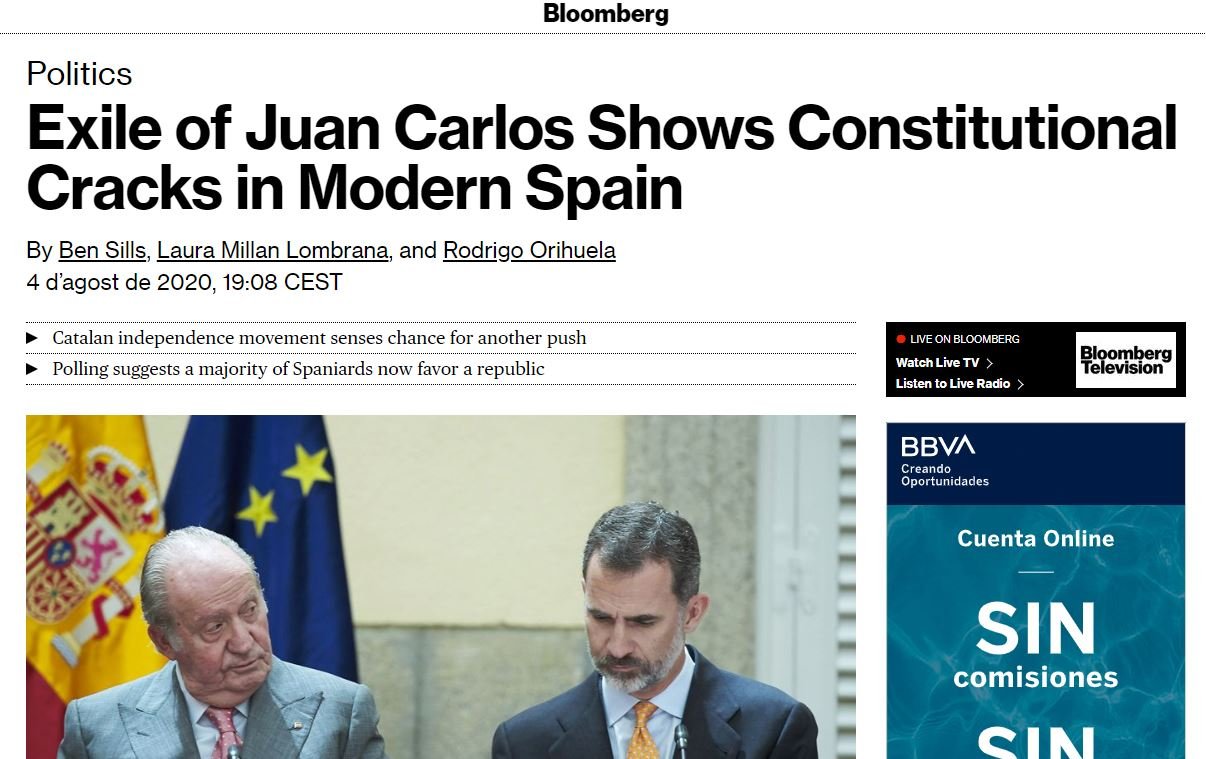 The analysis by the American media outlet notes that the formal requirements to carry out any constitutional change in Spain are highly complex, but despite this - or perhaps, because of it - the situation could get out of hand:

"The Catalan crisis of October 2017 showed that the legal order can start to wobble when you have heavily armed riot police clashing with protestors on the streets."

Moreover, a key difference this time around is the nature of the Spanish government, in Bloomberg's view. Instead of the right-wing PP in power in Madrid, there is a "left-wing coalition which is much more ambivalent on the issue of Spanish unity". The newspaper quotes Catalan vice-president Pere Aragonès as saying that "if there is a time to rethink everything, it is now".

Bloomberg claims that the situation of king Felipe VI himself is delicate, because, unlike Elizabeth II in the United Kingdom, he has become "an isolated figure" and parts of Spanish territory - such as Catalonia - have effectively become "no-go areas" for the monarch, such as last year's Princesa de Girona awards which had to be moved from the city of Girona - "a hotbed of separatist support" - to Barcelona, where they nevertheless led to huge protests and disruption.