Benoît Hamon sees freedoms at risk in Poland and Spain, ahead of prison visit 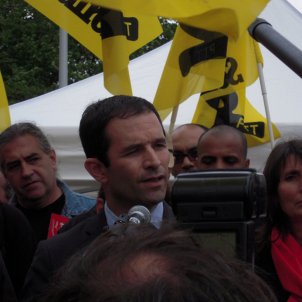 The man who was the Socialist candidate in France's last presidential elections, Benoît Hamon, is to visit the Catalan political prisoners on Monday in Madrid's Soto del Real prison, in a gesture of support. In a strongly-worded statement, Hamon's party draws a direct comparison between the recent visit he made to Poland in defence of fundamental freedoms and his visit to Spain tomorrow in support of the Catalan government ministers who are currently on trial in Spain's Supreme Court.

"Tomorrow I will be with the elected Catalan political prisoners. It matters little if we share their struggle for independence or not, who can seriously believe that the solution to this conflict in Europe is not primarily political?" he wrote in a tweet.

Hamon's party, Génération.s, explains the visit with the observation, following the politician's recent visit to Poland, that "all around Europe it can be clearly seen that fundamental freedoms are threatened."

"This Monday, April 1st, Benoît Hamon will speak out about the undermining of another freedom in Europe: that of political freedoms, illustrated today by the use of a judicial route to solve the political conflict between the Catalan independentists and the Spanish government," says the party's statement.

"While Génération.s maintains a position remote from any political interference, it considers that in terms of political freedom or the exercise of democracy, no political solution is to be hoped for when people are being imprisoned for their political opinions. Instead, it is dialogue and negotiation that must prevail and guide the approach of any democratic society. The European Union has a duty to assist the two parties to find a lasting solution that respects the different interests," it adds.

Hamon's visit to the Catalan political prisoners comes a week after 41 French senators called for France and the EU to intervene in the Catalan conflict in search of a solution.