"Catalonia, one of the most prosperous parts of Spain, it has a distinct culture and its own language". These are the opening words of a BBC documentary called Crisis in Catalonia, a 20 minute report that aims to show the world what has gone on in Catalonia and how Mariano Rajoy's PP government handled this political question, pushing it sideways into the courts and thus becoming an accomplice to the imprisonment (on remand) of independence movement leaders which has now continued for months.

The video refutes the version of events widely disseminated by the Spanish authorities, and even the written introduction of the documentary describes the referendum as an event which "shook Spain's democracy to the core", at the same time as the video shows graphically how Spanish police "used force to try to stop it, but more than two million Catalans challenged the police to become an independent republic".

One can sum it up, of course, by recalling that nine months after the vote on 1st October, Catalonia is still a part of Spain and the independence leaders are in prison or exile. However, the documentary also provides detail, counterpoint and perspective, going back to the end of the Franco regime, and explaining that, when democracy was restored, "Catalonia was able to govern itself within Spain and most people accepted that".

Journalist and narrator Niall O'Gallagher reviews the huge pro-independence protests, every year since 2012 on Catalonia's national day, he listens to former Catalan president Artur Mas explaining the requests made to Mariano Rajoy for a Catalan fiscal pact and the negative answers received, and he recounts how, in the face of this, the Catalan government decided to ask for a referendum to be held.

And then, how the PP government refused to budge from its initial position, and eventually, Catalonia opted to vote on independence on 1st October 2017. To illustrate that it was not only independence supporters who wanted to exercise their right to vote, the documentary shows images like the following: 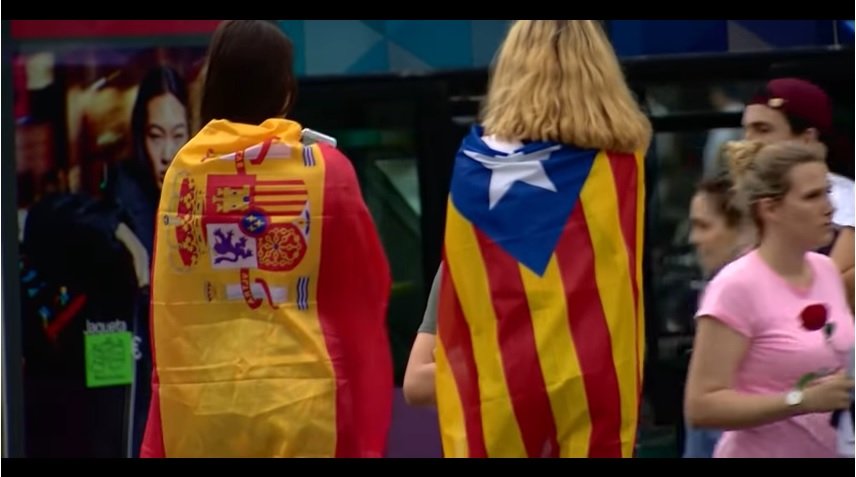 The desire to vote was so great among many Catalans that they spent the night before the referendum sleeping in schools, organising community activities, so that Spanish police could not enter and remove ballot boxes, which had been the object of an intense search for weeks prior to the referendum day.

Many didn't sleep at all, while others got up before dawn to go to the polling stations. But not long after voting began, the shocking images of police charges and hundreds of injuries began to appear in the media... and the ballot boxes full of votes confiscated by the police. All of this is shown in the BBC's images.

"We only wanted to vote"

Witnesses tell the British public broadcaster that "the Spanish state gave a green light to the use of force against the Catalans", witnesses who talk about the fear they experienced that day just through wanting to vote. As a counterpoint to this, the documentary interviews the then-representative of the PP government in Catalonia, Enric Millo, who states that he did not like seeing the police's actions and said that he "deeply regretted that any person could be hurt", but that, the actions were made necessary: "Instead of the Catalan government accepting the judicial ruling [banning the referendum] and calling off the vote, why did it call on people to go to schools, not only to vote, but to protect the schools and ballot boxes and prevent the action of the police?"

And not only this. The documentary also comes up to date, going through the events of October last year, the declaration of independence on 27th October, the imprisonment of some political leaders and exile of others and, even as far as the arrest of president Carles Puigdemont in March 2018. Millo's comments: the pro-independence leaders "are imprisoned for their actions, not for their ideas, nobody likes it that there are people in prison, but everybody has to be responsible for their actions".

To finish a story that remains open, the BBC concludes with the appointment of Catalonia's new government led by Quim Torra - it does not include mention of the fall of Rajoy's Spanish  government - and it closes by sustaining that "Catalonia's autonomy seems to have been restored, but the crisis continues. Spain continues using judicial means, but many Catalans continue asking themselves when or how the independence question will be resolved".