Barcelona is Unstoppable protesters, united in a chant: "Colau, out"

After weeks in which the protests against the mayor of Barcelona, Ada Colau, have grown more intense - first in the districts and finally in the central Placa Sant Jaume in the noisy whistling that took place during the proclamation speech that launched the city's late summer festival, La Mercè - citizens have finally had an opportunity to make clear their opposition to the direction the city is taking, and in particular issues such as incivic behaviour, grime and filth, and law and order problems. In the city's political epicentre, Plaça Sant Jaume and in front of the city hall, over a thousand people turned up in response to the call from the movement Barcelona és Imparable - "Barcelona is Unstoppable" - whose presentation in society was at a rally where the most repeated chants were those for "Out Colau" and "‘Colau, resignation".

In fact, although the organizers had insisted that the demonstration was not aimed at "demanding the resignation of anyone", it was perhaps a memo that had been missed by many of those attending, a mixed bag of Barcelonins even taking in groups calling for democratization in Cuba or members of the CSIF trade union, who also wanted to be present. Hundreds of banners distributed by the organization with messages such as "Enough danger on the street", ‘Enough dirt" or "Enough of saying no" were combined with other homemade efforts which were much more explicit: “Colau, out”. 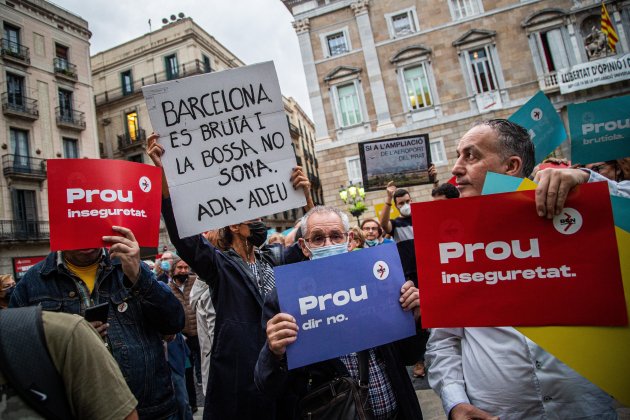 However, the Barcelona is Unstoppable movement avoided making any reference to the future job of the mayor, although at the time of the speeches it tried to deploy all its ideology, which, at the moment, is not linked to any explicit political line. In fact, no political party supported the protest, nor was any front-line politician seen - at least in the central core of the rally.

Barcelona is Unstoppable wants to make itself known as a movement born of the social fabric and that is why the event began with the reading of the more than a hundred affiliated associations and groups and the reading of its founding manifesto. The movement's main spokespeople then spoke: representing the retail trade sector, Gabriel Jené of Barcelona Oberta; the students, Ferran Piqué of the National Federation of Students of Catalonia; the residents, Manel Martínez of the group Tsunami Veïnal; and finally the sports groups, Gerard Esteva of the Union of Sports Federations of Catalonia. The last named, who has become the most visible face of the movement, asserted the success of the protest despite "the pressures we have received." 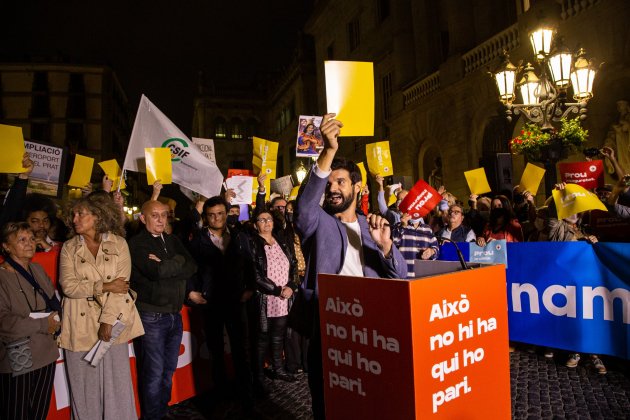 "We are here because we have before us a situation which we don't like and must change," said Esteva, who referred to city problems such as dissatisfaction among city residents and a lack of law and order, with the alarming statistic that "one in every three Barcelona people will be the victim of a crime before the end of the year" or the fact that there are "more than 5,000 empty premises" and "35 per cent youth unemployment". The rally ended with attendees displaying giant “yellow cards” to caution the current municipal government. Esteva warned that "if they ignore us, we will show them the red card."

With the city's administrative square full but not overcrowded - around 1,100 people present, according to the organization - the protesters accompanied the speeches with chants demanding Ada Colau's resignation almost unstoppably, a sign that although the first rally of the new movement has been well received, it is not so clear that its message, saying it does not want to point the finger explicitly at the mayor for the problems, was truly shared by many of the participants.

Main image: Over a thousand protesters responded to the "Barcelona is Unstoppable" call to protest  / Montse Giralt