Catalan president Pere Aragonès has accused the Spanish prime minister, Pedro Sánchez, of carrying out a "blackmail operation" over the expansion of Barcelona airport, first backed and now suspended by the Spanish executive, and he added that it can be seen "that they never had a will to invest in Catalonia or to make the airport an international hub". Aragonès made the statements in a Twitter thread, after the Spanish government announced on Wednesday afternoon that it was suspending the project to expand the Barcelona's El Prat airport.

"Today it has become clear what was suspected from the first minute: that the Spanish government and AENA have carried out a blackmail operation and that they never had a will to invest in Catalonia or to make the El Prat airport into an international hub," he stated. 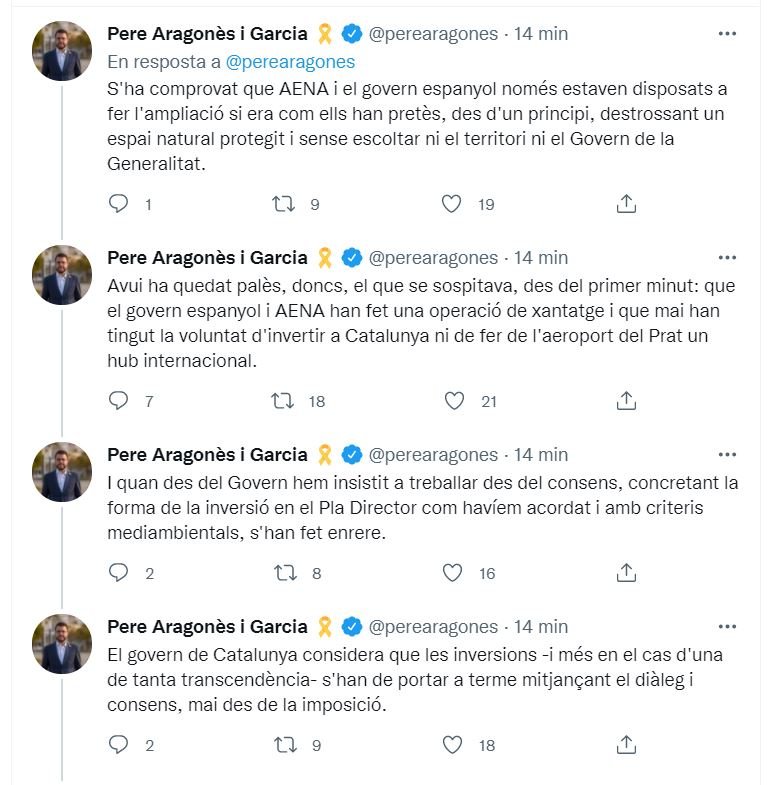 The Catalan president's Twitter thread began: "We learned at the same time as the news was published in the media, the announcement by the Spanish government to paralyse the plan for possible expansion of El Prat airport."

According to Aragonés, today's announcement showed that AENA and the Spanish government were only ready to carry out the expansion "if it was as they intended, from the beginning, destroying a protected natural space and without listening to the [voices of] the territory or the Catalan government". He said they had carried out a "blackmail operation" and that they "never had a will to invest in Catalonia or to make the airport an international hub".

He contrasted this with the Catalan government's insistence in finding a consensus and under environmental criteria: ""The government of Catalonia considers that investments - and even more so in the case of one of such importance - must be carried out through dialogue and consensus, never from the imposition," said the Catalan president.

Aragonès concluded that it has become clear that Catalonia needs to control its infrastructures. "This confirms our idea that it is essential that Catalan airports are managed by the institutions of Catalonia to ensure a consensus on their investments and the necessary environmental commitment. Once again, the need for Catalonia to decide on its political future is ratified. We cannot continue to accept this model of permanent imposition," he said. 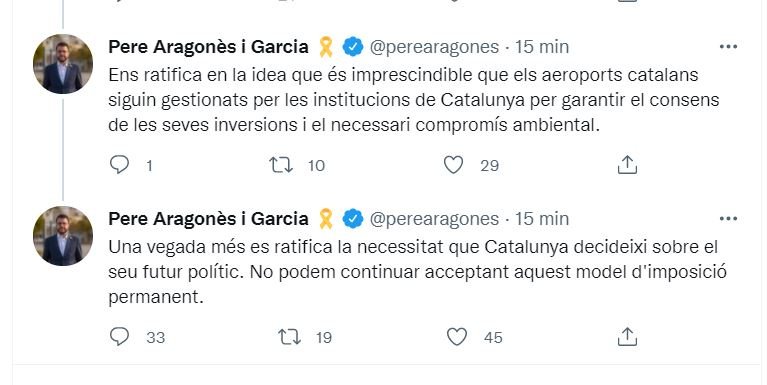 For his part, the Catalan vice president and infrastructure head for the executive, Jordi Puigneró, accused the Pedro Sánchez executive of "unilaterally breaking the agreement" for the expansion of El Prat. "A new disloyalty from the Spanish government, which has not complied with the agreements we reached in Madrid with the minister," said the vice president, but he also criticized the government's ERC partners, who had spoken out against it. "I have told president Aragonès: there are protests that could have been avoided and did not help the goal of reaching consensus," he asserted.