Arrimadas went to Puigdemont's Belgian neighbourhood, but she didn't pop in 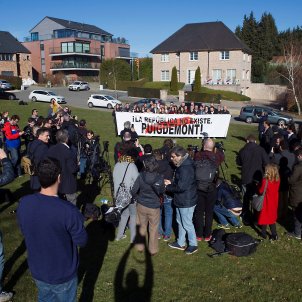 Inés Arrimadas, of the anti-independence Ciudadanos (Cs) party, today went for a Sunday morning visit to a park opposite Carles Puigdemont's Belgian residence, the 'House of the Republic' in Waterloo, to hold a press conference. A trip of more than a thousand kilometres for an event that, with photos, speeches and questions, lasted less than 15 minutes. She was right in the neighbourhood, but she definitely didn't pop in on Carles.

The Arrimadas media event, on the park opposite the Puigdemont residence, featured her giving a speech in front of a large banner, which, held by fellow Cs parliamentary deputies, attempted to parody the banners calling for the release of the imprisoned Catalan leaders. In black letters on a white background and a red strip, it read: "The Republic does not exist, Puigdemont!", in reference to the Catalan Republic, proclaimed on 27th October 2017, but not implemented. The Arrimadas "show" in Belgium was attended by about forty journalists and a few people waving Spanish flags.

Despite having received the offer of the exiled Catalan president Puigdemont to meet him, the Cs leader ignored the invitation: "We don't talk to fugitives from justice, the people they have to talk to are the judges". For the whole time of Arrimadas' appearance, the 'House of the Republic', where Puigdemont lives, had its front door open. The official Catalan senyera flag and the European flag were also flying.

Tweet text explains that at the House of the Republic, "the door's open Arrimadas, you're welcome, come in" and quotes lyrics welcoming a visitor from the well-known Catalan song "Qualsevol nit pot sortir el sol"

Standing about thirty metres away from this open door, Inés Arrimadas explained that she and her entourage had gone to Waterloo to declare that "the republic does not exist" and that they would "not allow separatism to tell us where we can go and where not." "This house is, in the separatist imagination, the seat of an independent republic and this is a lie," she said, adding that public money is helping Puigdemont to "flee from justice" so that he can live a "great life in Europe".

The media opportunity was held one day after Arrimadas had announced that she is to make the leap to Madrid politics, and is to stand as head of her party's Barcelona list for the Spanish Congress. This morning's event was thus the first stop in the Cs leader's campaign for the forthcoming Spanish general election on April 28th. 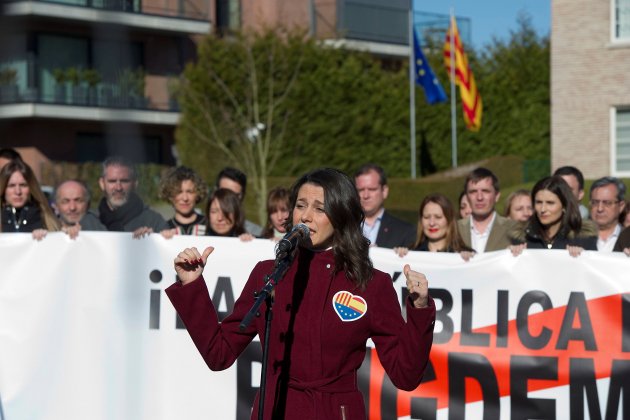 Arrimadas in front of her banner, gesturing with her thumbs, and the two flags in the background / Efe

Some Waterloo residents did not appreciate a Sunday morning media circus in their neighbourhood, and complained about the speakers which the Ciudadanos group had installed in the park.

Griselda Pastor, Belgium correspondent for the SER radio network, said in a tweet that neighbours asked the sound technicians if they had permission and they didn't give a straight answer. "It will only be 20 minutes," they said. 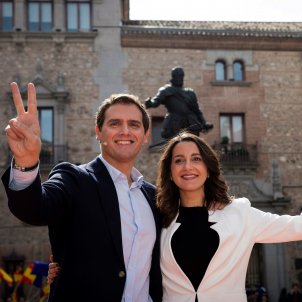 editorial Arrimadas and her number at Waterloo José Antich