For too long, the relationship between the Catalan government and that of the Spanish state has jumped from photo-op to photo-op, without going into the necessary negotiating depth to find a path out of the political conflict that has been entrenched for more than a decade. This Tuesday, Pere Aragonès travelled to the Moncloa palace in Madrid with the intention of digging deeper and moving on from this ground-hog day. The meeting with Pedro Sánchez, the first between Catalan and Spanish political chiefs for a year and a half, lasted more than two and a half hours, and was the first step towards the resumption of the dialogue table after the PSOE leader had cleared the way with the pardons. Aragonès insisted on the need for a solution for the exiles and for the legal framework to be found for the holding of a referendum on self-determination. Aware that the commitment to explore negotiations with the state raises internal doubts, the ERC leader wanted to make it clear that "the government of Catalonia is not renouncing independence". 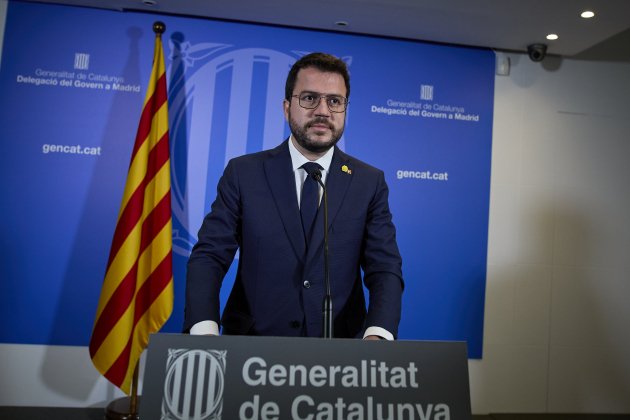 Aragonès during the press conference after the meeting with Sánchez. / Europa Press

From the meeting, preceded by the decision of the Court of Accounts, which Aragonès described as "savage" and "an aberration", there emerged two details in the form of dates; little else was expected. The resurrection of the dialogue table between Catalonia and Spain will take place in the third week of September, after the holidays. This was when the Spanish government wanted it, but it gives Aragonès time to ensure that he goes there with enough internal unity. The Catalan and Spanish government teams will work in the next few weeks on the methodology and the agenda. During a post-meet press conference at the Catalan government's office in Madrid, he justified that the meeting should not be held immediately, but rather should be patiently awaited until after the summer holidays, because they are "not just looking for an image". "If we wanted that we would have it this week." Asked about the possibility of modifying objectives, the head of the Catalan executive asserted that a referendum is already an intermediate path, because it gives the option to the "no", that a position of maximums would be to demand that independence be imposed tomorrow.

Although he did not confirm who will sit on the Catalan side of the table, nor whether Oriol Junqueras will be there, Aragonès recalled that when it was set up it was agreed that it would be a delegation with institutional status. At the same time, he pointed out that the independence movement will be rigorous with the results of negotiations with the Spanish government, bearing in mind that the CUP and Junts have allowed a two year period for the dialogue route to deliver.

Proposal from the state

"It will not be easy, because we won't give up our goals, let no one be mistaken, we go into this with maximum ambition," said the Catalan president, who called on the Sánchez government for "a proposal from the state for Catalonia". Aragonès recalled that the pact that ERC signed with the PSOE to put Pedro Sánchez into government - at the beginning of 2020 - provided that the agreement reached at the dialogue table would be validated by Catalans in a vote. “We haven’t gone all this way to go back to 2010,” he affirmed.

At the same time, during the month of July, the bilateral commission between the state and the government of the Generalitat will be convened, as a place intended to tackle day-to-day management issues, such as the alleged non-compliance with investment, European funds and transfers of powers. As ElNacional.cat has reported, Aragonès asked Sánchez to make it clear that there must be two separate spaces, that it is necessary to separate the negotiation for the resolution of the substantive political conflict from the issues of the autonomous agenda, which can affect any other community.

The most difficult negotiation in contemporary history

In essence, the meeting served to allow the head of the Catalan executive to formally explain to Sánchez that the two indispensable points of the Catalan side are and will remain self-determination and an amnesty, as well as "the immediate end to repression." Although on this last point there may be more room for action, with regard to the two main demands, the Spanish government is not willing to give in. Therefore, from the outset, the positions on either side are totally opposed. Aragonès himself pointed out that "the differences are obvious" and that he has found that "our positions are far apart". However, there is a change of attitude and a commitment to work proactively to find a solution that can satisfy everyone. “It will be the most difficult negotiation in all of contemporary history,” the president admits.

"We need to give dialogue, negotiation and politics a chance," said Aragonès, citing the Council of Europe's report - which calls for the release of prisoners, the withdrawal of the European Arrest Warrants and an end to the persecution of political leaders - as a guarantee for their demands. "The Council of Europe is paving the way," he said.

Aragonès is very clear that it is essential to work hard on alliances within Catalonia before going to the dialogue table with the state. In other words, the polyphony heard during the previous phase cannot be repeated, when the Junts party, which then held the presidency, was publicly suspicious of this dialogue space. Junts, like the CUP, has pledged to respect ERC’s dialogue pathway, since ERC came out ahead in the 14th February elections. The margin they give is two years, until 2023, with the condition that this path "should not be lengthened unnecessarily."

ERC acknowledges that it will be extremely difficult for negotiation to bear fruit, but insist that it is necessary to explore this path, and do so with conviction, to win international allies, since "unilateralism has no complicities", as they say in the presidential circles.

So, before the dialogue table meets in September, Aragonès will call the independence movement to a summit to chart a joint strategy.

In the main image, Aragonés and Sánchez meeting at the Moncloa palace. / EFE