The storm threatened to break. Both literally and metaphorically. But it held off. Under a sky which alternated between periods of clear blue and others of heavy, dark clouds, and against a howling wind - the perfect metaphor for Catalonia's current political moment - the key leadership of the independence movement assembled in Barcelona beside the Arc de Triomf, in one of the key encounters prior to today's major rally for the Diada, Catalonia's National Day. 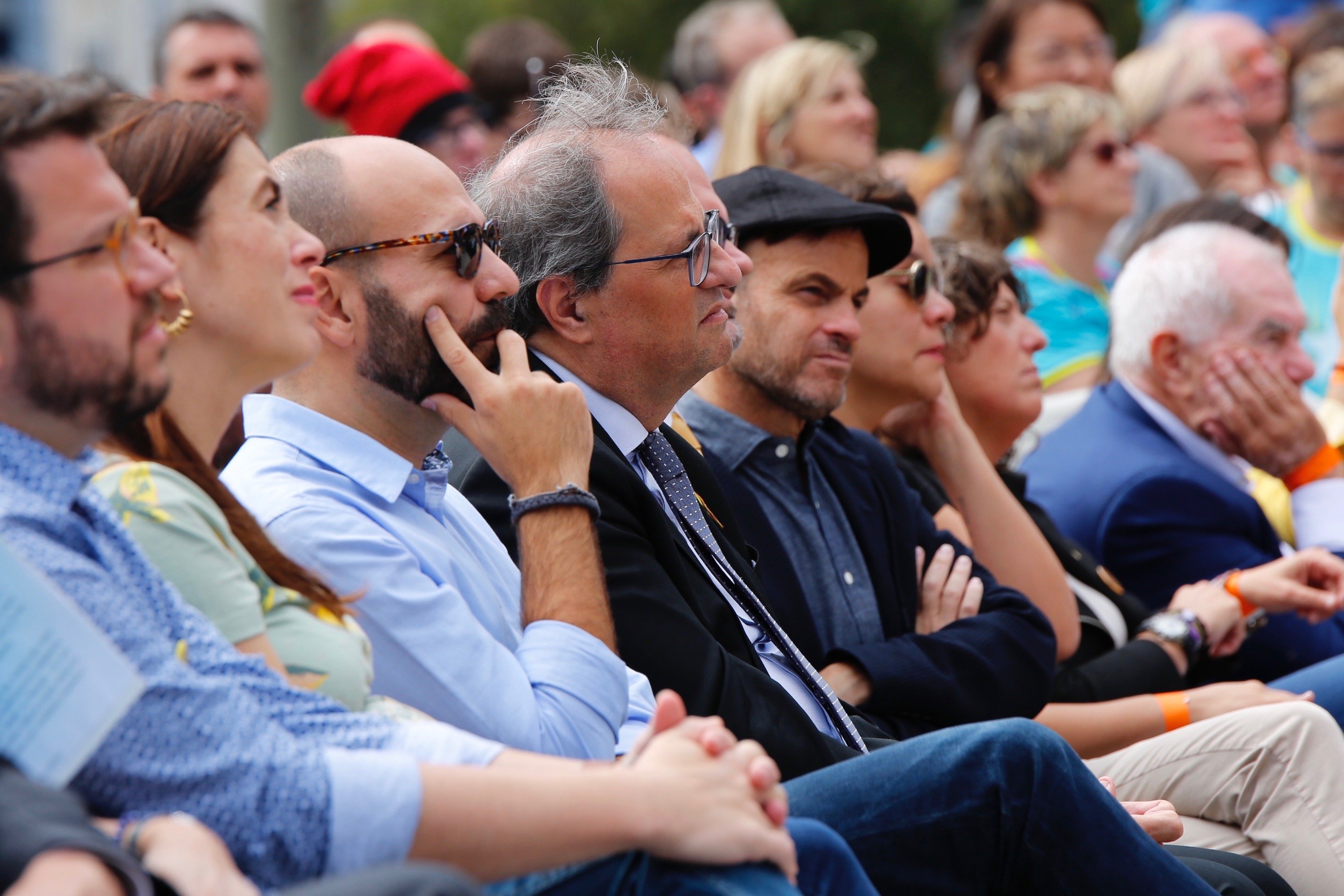 The event, called by the pro-independence group Òmnium Cultural, was open to the public and centred on the slogan "For rights and freedoms, acquittal". This demand - in reference to the 12 accused pro-independence leaders currently awaiting their verdict from Spain's Supreme Court - is, along with the call for a negotiated independence referendum, the political exigency that is shared most broadly across Catalonia's society and political spectrum. That is why this morning, members of the Catalan government, headed by president Quim Torra and vice president Pere Aragonès, and representatives of pro-independence political parties JxCat, ERC, CUP, and Democrates, came together with members of the left-wing party which is non-aligned on independence, Catalunya in Comú. Key Comuns figure Ada Colau, mayor of Barcelona, did not attend, but took part via a video in which she called for acquittal of the 12 pro-independence leaders, and backed their right to freedom of expression, despite some discrepancies. Also present at the rally, leaders from the UGT and CCOO trade unions, family member of the imprisoned and exiled politicians, and well-known cultural figures.

This is the second Diada in which the political and social leaders who led the independence process until October 2017 have been behind bars, with the verdict and sentence of the Supreme Court trial, due in the next few weeks.

From Lledoners prison, Òmnium president Jordi Cuixart took part in the ceremony in the only way that was possible: by letter. A text, read by the cultural organization's vice-president Marcel Mauri, which tried to bridge the gap between "supporters of dialogue and those of confrontation". "The permanent defence of dialogue is the only way to resolve the conflict," said Cuixart, "it forms part of the democratic confrontation with those who want to condemn freedom of expression and the right to protest." That is why, he said, they will "never" abandon dialogue, not even with those who want to see them "in prison for many years." The Òmnium leader expressed his confidence that in the end Catalonia will be "reinforced as a society" and that they can only reach this point if they do it "together". 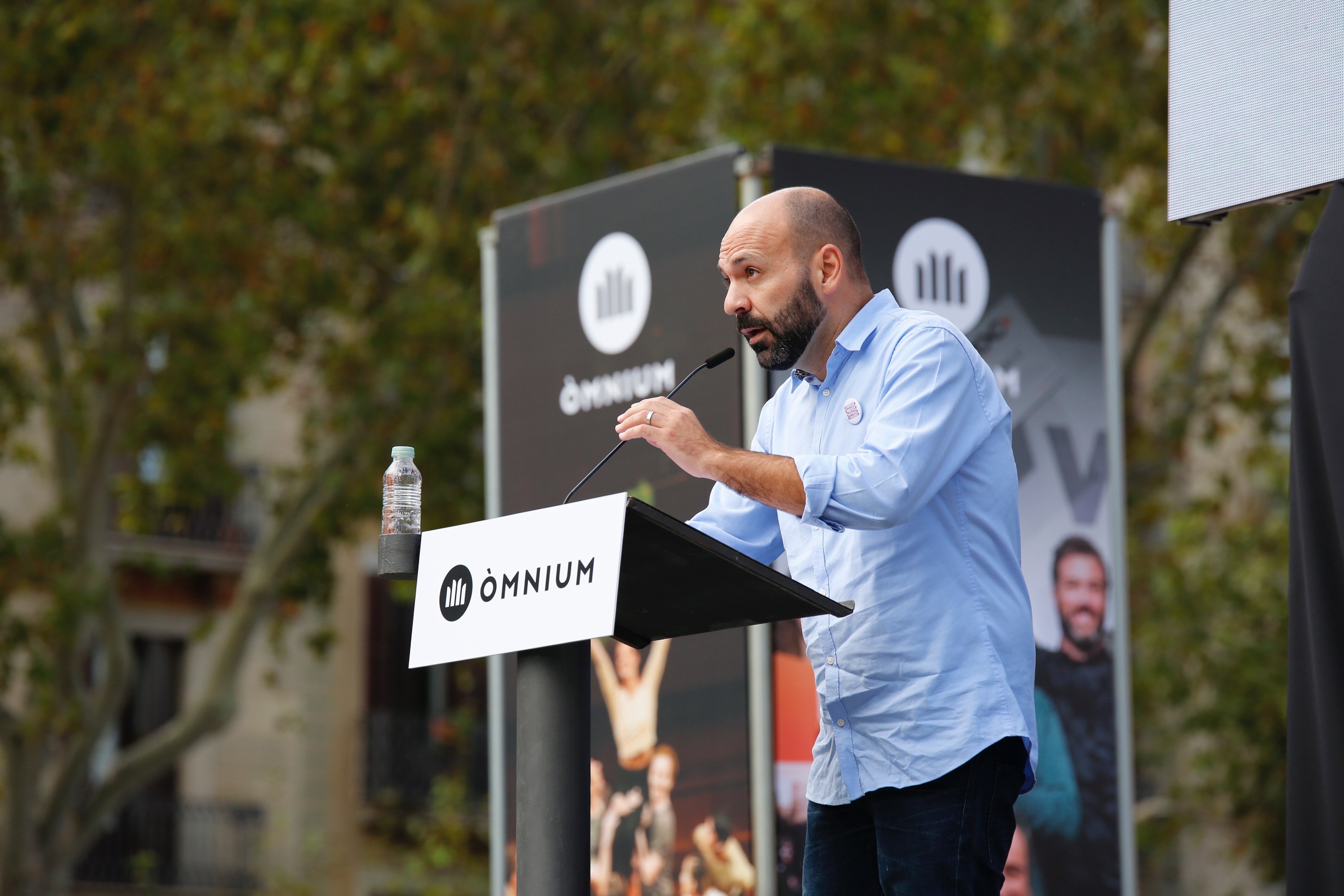 During his speech, Mauri questioned the separation of powers in Spain, and recalled that "the Spanish state has two months left to comply with the resolution of the UN Working Group on Arbitrary Detention", which gave a deadline of six months to release pro-independence prisoners.

On the response of the verdict, the Òmnium leader emphasized that it must be collective, and that, as Cuixart says, "all the rights that have been 'borrowed' will have to be exercised once again." Or to express it in the way it has been put previously, "we'll do it again".

The event ended with a long and resounding warning from the audience to the political leaders present: a sustained chant of "unity!" It was the prelude to this afternoon's huge Diada rally. The rally, led by the other major pro-independence civil group, the Catalan National Assembly (ANC), had the slogan "Objective: independence", narrowing the circle and with the Comuns thus staying outside. It was for this reason, too, that Òmnium, which was also a co-organizer of the afternoon's mobilization, wanted to mark its own profile in the morning.