Hundreds of thousands call for "Liberty!" in new Catalan march against repression 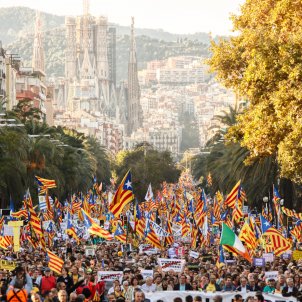 There were around 350,000 people, according to city police. The organizers, in an unusual step, questioned this estimate and asserted that the real figure was significantly higher.

What was clear was that the call for "Liberty!" and against repression by hundreds of thousands of Catalans resonated this Saturday on the streets of Barcelona, ​​in a rally that filled Carrer Marina from Avinguda Icària to the Sagrada Família cathedral. The march, organized in protest at the Spanish Supreme Court's conviction of the pro-independence leaders, was also an expression of the indignation and complaint about the dozens of arrests made in the protests since the court decision was announced nearly two weeks ago.

For the protesters, it was a return to the same street where two years ago another major march was held: against the provisional imprisonment of the pro-independence leaders in autumn 2017. However, the city police estimate of Saturday's crowd at 350,000 people, far below the figure given two years ago (750,000), for a march which stretched for just as many city blocks, caused the pro-independence organizing groups Omnium and ANC to attribute this variation to the fact that the political responsibility for the city's Guàrdia Urbana police is now in the hands of the pro-Spain Catalan Socialists.

Saturday's protest had a transversal nature, trying to go beyond the calls for independence and appeal to the defence of the fundamental rights violated by the arrests and the court sentences. There were no politicians at the head of the march and the Catalan president, Quim Torra, the vice president, Pere Aragonès, and the parliamentary speaker, Roger Torrent were relegated to a secondary space.

"The objective of the repression is to 'invisibilize'", said ANC head Elisenda Paluzie. For this reason, she named one by one not only the pro-independence leaders sentenced to jail for sedition, but also all of the people, mostly young, who have been jailed provisionally during the protests and unrest of the last fortnight.

On behalf of the families of the prisoners, Blanca Bragulat, wife of Catalan politician Jordi Turull, restated the peaceful nature of the independence movement which led more than 2 million people to cast a vote on 1st October 2017. "We have been, we are and we will be a people that face injustices and repression with courage, always from pacifism and non-violence," she stressed.

Bragulat called for people to keep up the call, "today and always", for the liberation and rights of the prisoners, exiles and all those who are suffering from the "repressive attacks." "No court sentence however harsh will change the political aspirations of millions of people, who will remain determined and firm to defend their beliefs," she concluded.

Saturday's march marks the first time that the independence movement has attempted to mobilize hundreds of thousands of people twice in little more than a week. Just eight days ago, another Barcelona march against the Supreme Court verdicts brought an even larger crowd to the street - the police estimate then, on 18th October, was 550,000 people. 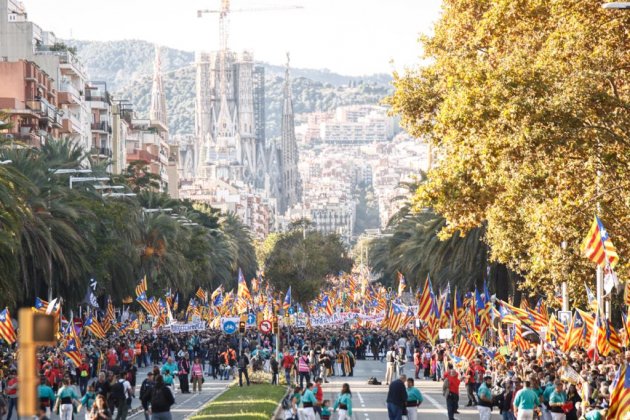 Below, videos from the early stages of the rally.