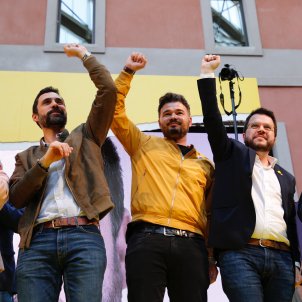 The pragmatic turn seemingly established by the Catalan republican left ERC, since 27th October 2017, appears to be giving positive results. According to the last barometer of the Centre for Opinion Studies (CEO), if there were to be elections to the Catalan Parliament now, Oriol Junqueras' party would win with 38/40 seats, up to 8 more than they currently have (32). The other news is that pro-independence parties would retain the absolute majority.

Unionist right wing Ciudadanos (Cs), the single party holding the most seats in the Catalan Parliament (36) since the last 21st December 2017 elections, would massively fall to the fourth place 23/24 -probably placing the blame on former leader Inés Arrimadas' flight to Madrid. Ciudadanos would thus be placed behind pro-inidependence centre Junts per Catalunya (JxCat), which is to go down from (34) to 25/27, and behind the unionist  Socialists PSC forecasted to go up to 25 (now, 17). JxCat and PSC would be disputing being the second force at the parliament. Catalan Podemos, En Comú, would rise to 11/12 (now, 8). The pro-independence radical left CUP would also improve, with 6/7 (now, 4) and the right wing PP would maintain the downward trend and go from 4 to 3.

The projection of the Catalan government's electoral analysis centre predicts that the independence parties would retain the independence majority in the Catalan chamber, set at 68 seats. In the worst scenario, the sum of ERC, JxCat and the CUP would get 69, and 74 seats at best. Junqueras' party grows inversely proportional to Puigdemont's party JxCat, and the CUP improves its results. Now, if we change the axis, left-wing parties would reach the majority: the sum of ERC, PSC and En Comú would be between 74 and 77 seats.

ERC leader, Oriol Junqueras, who has been in pretrial detention for almost two years, is the best-rated leader with 6.26. In second position is the spokesman of En Comú in Congress, Jaume Asens, with a 5.25. Behind them, the survey shows a draw between Marta Rovira (ERC) and Carles Riera (CUP) at 5.10.

Spanish Congress speaker, Meritxell Batet (PSC) and the leader of En Comú in the Catalan Parliament, Jèssica Albiach, tie in the fourth place, with 4.66, followed by the Socialist leader, Miquel Iceta, with 4.33. Presidents Carles Puigdemont, in exile, and Quim Torra get 4.31 and 4.15 respectively.

The lowest rated leaders are Carlos Carrizosa of Cs (1.83); Alejandro Fernández of the Catalan PP with a 2.15 and Inés Arrimadas of Cs, with a 2.28.