Spain's CIS (Centre for Sociological Research) predicts a draw between pro-independence ERC (Catalan Republican Left) and pro-union Ciutadans (Citizens) in the 21st December Catalan election. They also suggest a possible loss of the pro-independence side's absolute majority. According to the report, the pro-union party would win in terms of raw vote percentage, whilst ERC would earn 32 seats compared to 31 or 32 for their opponents. President Puigdemont's Junts per Catalunya (Together for Catalonia) would come third, with 25-26 seats. PSC (Socialists’ Party of Catalonia) would get 21 deputies, Catalunya en Comú (Catalonia in Common) would draw with CUP (Popular Unity Candidacy) on 9 and PP (Popular Party) would fall into last place on 7.

The survey, published hours before the formal start of the election campaign, was conducted between 23rd and 27th November. According to the results, Ciutadans would gain 22.5% of the vote for 31-32 deputies, whilst ERC would get 20.8% for 32 deputies. This discrepancy is due to the system used in Catalan elections where deputies are assigned in four constituencies, corresponding to the four provinces, based on the vote share each party earns in each constituency.

According to this survey, the pro-independence parties (ERC, Junts per Catalunya and CUP) would earn 44.4% of the votes and 66-67 seats, when 68 are needed for an absolute majority. This would represent a loss of one seat for CUP with respect to the last election on 27th September 2015 and a loss of 5 on the 62 won by Junts pel Sí (a joint candidacy between ERC and the party now behind Junts per Catalunya). The time, the pro-independence side totalled 47.8% of the vote, some 3.4 points more than that now predicted by CIS.

As for the pro-union parties, they would total 59-60 deputies and 44.3% of the vote, compared to 52 seats and 39% last time. PP would do worst and would lose up to four of the representatives they had in the last Parliament to fall to last place. PSC, meanwhile, would gain 5 over the 16 they won last time.

Between the pro-independence and pro-union sides is Catalunya en Comú, who would be punished for their neutrality in a clearly polarised election, earning 9 seats and 8.6% of the vote, a loss of 2 deputies on last time. 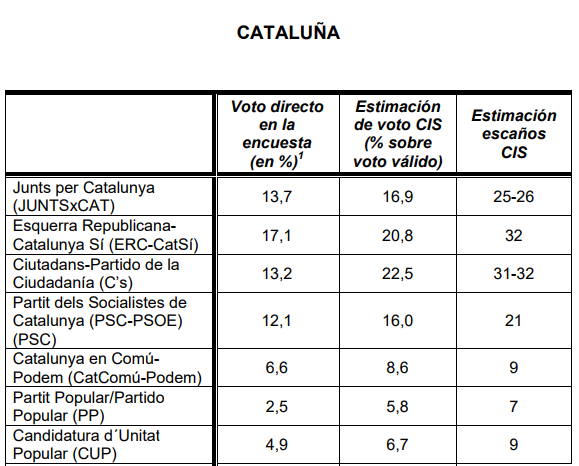 Columns, left to right, "Direct vote in the survey (%)", "CIS' vote estimate (% of valid votes)", "CIS' seats estimate". Note that many European countries use a decimal comma instead of a decimal point.

By constituencies, Ciutadans is the clear winner in Barcelona (link in Catalan), ahead of ERC 21 seats to 17. In Girona, on the other hand, the pro-índependence side is the clear winner, with Junts per Catalunya leading. Lleida also sees the pro-independence side win, but this time in the form of ERC, whilst Tarragona mirrors the national result of an ERC-Ciutadans tie.

Asked specifically about candidates, Puigdemont is the preferred choice for president after the elections (link in Catalan), even though his list is in third place behind vice-president Oriol Junqueras' ERC and Inés Arrimadas' Ciutadans.

The possibility of independence

Those surveyed were also asked about alternative forms of territorial organisation of Spain. The most popular response was "a state which recognises the possibility of autonomous communities becoming independent states", supported by 44.0%. 29.7% wanted a state with greater autonomy for the regions than currently whilst 12.4% want no change to the current system. In the other direction, 6% of respondents want a state with a single central government and no autonomous community and 5% support removing autonomy from the regions.