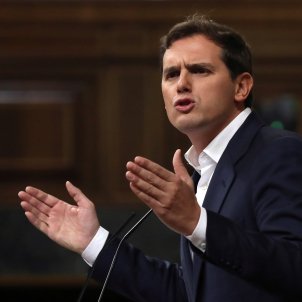 Ciudadanos and Podemos have this Monday criticised Spanish king emeritus Juan Carlos I for having been photographed with the Saudi crown prince, Mohammed bin Salman, at the Abu Dhabi Formula 1 Grand Prix. Whilst left-wing Podemos, the most republican of the major Spanish parties, described the crown prince as a "shady" figure, Ciudadanos (Cs), strongly pro-monarchy, described the photograph as "inopportune". Prince Mohammed has been accused by the CIA, among other international bodies, of being behind the assassination of Saudi journalist Jamal Khashoggi in the country's consulate in Istanbul in October.

Podemos wrote that "whilst the king emeritus is travelling to Abu Dhabi to watch the F1 and compromising photos of him are taken with shady figures like the Saudi prince, PSOE, PP and Cs continue blocking our request for him to appear in the Congress".

More unusual to see was Cs joining in the criticism. The party's secretary general, José Manuel Villegas, said that "it wasn't the time" for a meeting between Juan Carlos I and prince Mohammed.

These stances differ greatly from that of the Spanish government, which this Monday repeated its "respect" for the monarch. "We haven't discussed that in the cabinet, it's a thing which is out there and we have the respect for the king emeritus that he deserves, and nothing more", was all spokesperson Isabell Celaá had to say on the matter this morning.