Spanish king Felipe VI has avoided any reference to the political situation in Catalonia and the European rejection of the Supreme Court's requests for the extradition of Catalan president Carles Puigdemont and ministers during his speech at the traditional graduation ceremony for this year's new judges.

The monarch, who dedicated a large portion of his speech to praising the work done by judges and their independence to guarantee the good working of the rule of law, ended with words of support towards them: "you can always count on the trust and support of the crown". He earlier described the judiciary as "an independent power upon whom falls the exercising of judicial power in accordance with the constitutional values of liberty, equality, justice and political pluralism". 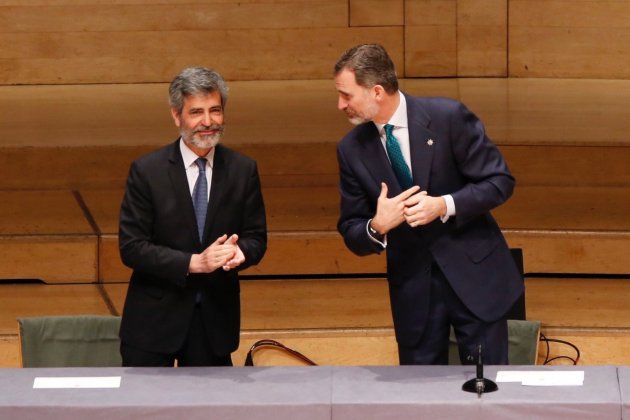 Neither the speaker of the Catalan Parliament, Roger Torrent, nor the mayor of Barcelona, Ada Colau, were present at the ceremony. Exceptionally, breaking protocol, they hadn't been invited. But they weren't the only ones missing. Barcelona's Auditorium today had many empty chairs, for an event that's normally packed. Also absent were some representatives of the Catalan judiciary.

Accompanying the king were the Spanish justice minister, Rafael Catalá, and the president of CGPJ (General Council of the Judiciary), Carlos Lesmes. Watching from the fifth row was Supreme Court judge Pablo Llarena, the judge running the case against last year's Catalan independence referendum which has taken nine ministers and civil society leaders to pretrial detention. The first speech was given by his wife, Gema Espinosa, director of the CGPJ's Judicial College, who called for the judges to have empathy for the public. 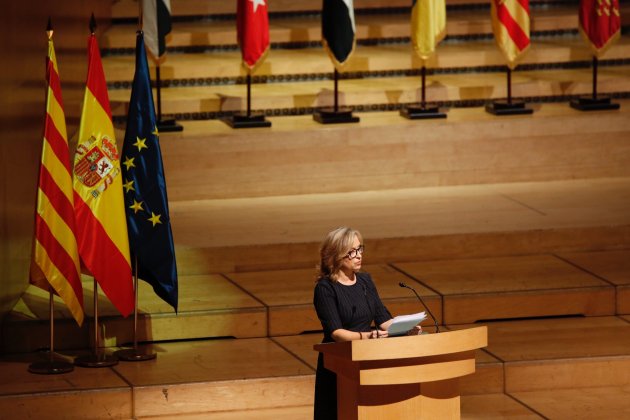 At the end of the event, Felipe VI described the judges trained by the school as "independent, immovable, responsible, subject solely to the rule of law". "Firmly committed to the protection of people's rights and interests, especially their fundamental rights and public freedoms, a guarantor of the legality of the public powers' actions. Judges imbued with the constitutional values which rule over our legal system," he said.

Before the monarch arrived, a group of students from ESMUC (College of Music of Catalonia) were ejected for trying to receive the king by singing Els Segadors, the Catalan anthem. The protests called by CDR (Committees for Defence of the Republic) against the visit led to the whole area around the Auditorium being closed off by police.

"The rule of law means that the the role of judges, trying cases and enacting verdicts, has to be guided by the protection of the constitutional principles, which places you in a key situation for society as public servants who safeguard and guarantee the rights and freedoms of all citizens," the king said.

Felipe VI recognised the difficulties inherent in the work carried out by judges, saying it required "integrity, impartiality and a solid sense of Justice".

The event lasted barely three quarters of an hour. At the end, the traditional drinks were offered to the new judges and their families.