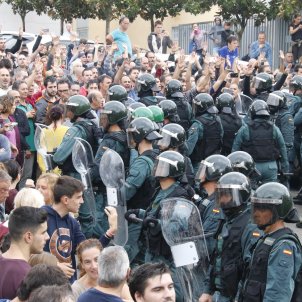 The Spanish government has surprised Congress delegate Jon Iñarritu (EH Bildu) with its response to his questions about a comment made by a Civil Guard general on independence supporters.

According to Iñarritu, on 16th May, the general in charge of the 7th Group of the Civil Guard in Catalonia, located in Sant Andreu de la Barca, gave a speech for the commemorations of the 175th anniversary of the force's founding during which he said: "We're the body which today confronts terrorism; the radical, autocratic, sectarian and supremacist independence movement; organised crime and all ways of acting against the state, as it is conceived by the Constitution".

Following the speech, the delegate presented a request to the Spanish government to inquire whether or not it agreed with the officer's opinion. He also asked if they believe the "pro-independence ideology is comparable to terrorism and organised crime", whether "the general has maintained his duty to political neutrality" and what its "assessment is of the presence of the far right in the state's security forces".

In its reply, the Spanish government says the general "respect[ed] the regulatory framework which governs the behaviour of the members of the state's security forces" and that he "maintained his duty of political neutrality". They end by stating they won't open an investigation.