Manuel Valls, who this week announced he will stand for mayor of Barcelona in next year's election, is a known opponent of Catalonia being able to vote on its independence. By contrast, he was one of the strongest supporters of the upcoming self-determination referendum in New Caledonia, to such an extent that he headed the French parliamentary commission on its institutional future. This delegation was in charge of preparing the vote, representing the French National Assembly. New Caledonia, a Melanesian archipelago, is a special collectivity of France.

Valls' commitment to the referendum was such that, in February, he was nominated by his colleagues to propose the relevant law.

The referendum is to be held on 4th November this year, and French political media has been surprised that someone with a role like Valls' should resign barely a month beforehand. Manuel Valls, who hasn't hidden his hopes New Caledonia will vote to remain French, did however accept to put the matter to a referendum and was even preparing what would come after that point. 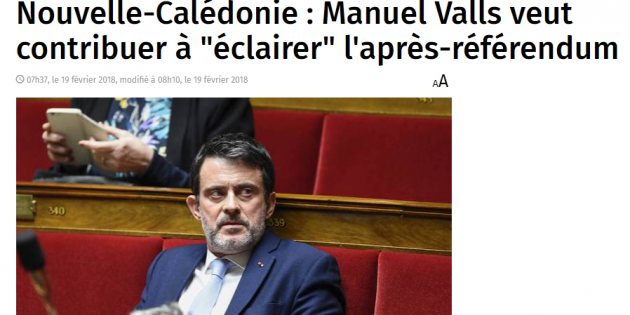 With his decision to stand for mayor of Barcelona, Valls has left hanging various political commitments in France. But he hasn't renounced the privileges enjoyed by former prime ministers. He's still got the car, chauffeur and assistant when he's in the country, according to France Info. He's also got the right to two bodyguards when abroad, but he's turned that down.