Imprisoned Jordi Sànchez to be second on Puigdemont's electoral list

The president of the ANC (Catalan National Assembly), Jordi Sànchez, will be number two on the electoral list for Junts per Catalunya (Together for Catalonia) for Barcelona for the 21st December Catalan election, a list to be headed by president Carles Puigdemont, El Nacional has learnt. Sànchez himself has confirmed the news in a letter addressed to ANC members (link in Catalan).

The Junts per Catalunya list, which Puigdemont is finalising in Brussels, might also feature the imprisoned ministers Jordi Turull, Josep Rull, Joaquim Forn and Meritxell Borràs, as well as exiled minister Lluís Puig, in prominent positions. Clara Ponsatí, also in Brussels, has declined to be nominated, although some sources suggest she might reconsider. ERC (Catalan Republican Left), meanwhile, has decided on electoral lists with all its current ministers in leading roles, as well as the speaker of the Catalan Parliament, Carme Forcadell.

Also on Puigdemont's list will be Ferran Mascarell, who was the Catalan government's delegate to Madrid during the last legislature and who started his long career with PSC (Socialists Party of Catalonia) and the historian Aurora Madaula, one of the promoters of the initiative of a single joint candidacy between the pro-independence parties. In the Catalan electoral system, each province has a separate list for each party. For Junts, their list for Lleida will be headed by Josep Maria Forner, whilst Hèctor López Bofill is being considered to lead their Tarragona candidacy. Other names which might feature are the Catalan government's delegate to Paris, Martí Anglada, and the director of the Institution of Catalan Letters, Laura Borràs.

One month in prison

Sànchez is imprisoned in Soto del Real (Madrid), together with the president of the other large pro-independence organisation, Òmnium Cultural, Jordi Cuixart. This Thursday is exactly one month since a judge of Spain's National Audience court, Carmen Lamela, sent them into preventive detention. They are both accused of sedition as alleged promoters of the protests on 20th and 21st September against the Civil Guard's Operation Anubis. The police operation led to the arrest of a number of high-ranking officials of the Catalan Economy ministry over the organisation of the 1st October referendum.

This Wednesday, PDeCAT's (Catalan European Democratic Party) national council turned over to Puigdemont the job of deciding on the Junts per Catalunya lists. Junts is to be a cross-spectrum pro-independence brand for the 21st December Catalan election. 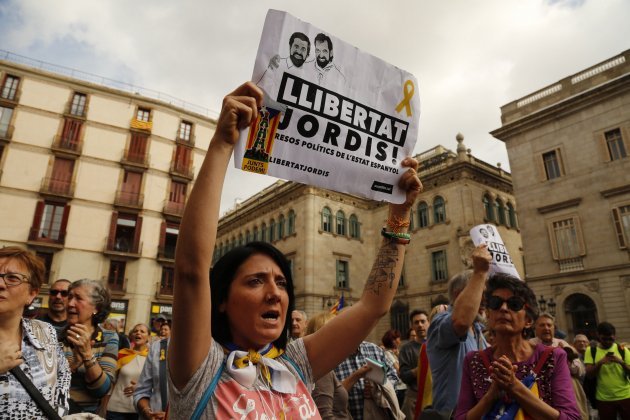 Without Mas or Pascal

The double act of Puigdemont and Sànchez at its head reinforces the civil nature of the list, the idea it's not purely politicians. Although PDeCAT gives fully support to the list, the majority of its leaders, including the party's president (and Puigdemont's predecessor as president of Catalonia), Artur Mas and its general coordinator, Marta Pascal, are not standing.

The Junts pel Sí (Together for Yes) coalition for the previous Catalan election, in 2015, formed by ERC, CDC (Democratic Convergence of Catalonia; reformed as PDeCAT) and a number of independent candidates, was headed by Raül Romeva, now one of the imprisoned ministers, and the then leaders of ANC and Òmnium, Carme Forcadell, now speaker of the Parliament, and Muriel Casals, who died in early 2016. The new Junts per Catalunya list now counts with Forcadell's successor, Sànchez, whilst Forcadell herself will be number 4 for ERC. Casals' successor, Jordi Cuixart, meanwhile, has declined to stand in any candidacy.