Puigdemont's strategy if he is found to enjoy MEP immunity

The legal hounding of the pro-independence politicians in exile is reaching a critical moment. If the Court of Justice of the European Union adopts the conclusions of one of its advocates general and accepts that Carles Puigdemont, Oriol Junqueras and Toni Comín automatically became MEPs, and thus enjoy the immunity deriving from that, the situation will change dramatically.

Puigdemont's defence team, headed by Gonzalo Boye, are convinced that will be the outcome of the question put to the court. A decision in that direction would mean that both Puigdemont and Comín (and Clara Ponsatí in a few weeks, when she takes over one of the seats of the departing British MEPs) could finally enter the European Parliament and take their seats, with everything that entails.

Once the Court of Justice of the European Union has given its verdict, the European Parliament, whose arguments in the case supported the Spanish state's line, will be informed of it and will have to act in consequence. The Parliament's president, David Sassoli, said last week, when asked about the matter, that the chamber is ready to apply the court's decision. He repeated this by letter to the president of the Catalan Parliament, Roger Torrent.

Puigdemont's lawyers are so confident in a positive result that they're already preparing a response to the appeal Spain would have to present to the European Parliament if it wants to maintain the strategy of legal hounding through European Arrest Warrants. In this case, the Spanish courts would have to appeal for the Parliament to revoke the exiles' immunity.

The lawyers, however, are also considering the possibility Spain wouldn't submit an appeal, given that that would force the European Parliament to analyse the basis for the charges against the exiles and the imprisonment of their colleagues, as well as statements from other international bodies, like the UN Working Group on Arbitrary Detention.

The lawyers have studied the different scenarios a positive verdict could offer the president, including the greater freedom of movement. Although they accept the possibility of visiting Perpignan, with the symbolism involved in being in Northern Catalonia, they have advised against Puigdemont leaving Belgium as his place of residence. Similarly, they are opposed to him entering Spanish territory.

They also are advising him against standing again as a candidate for president of Catalonia in the next election, even if he could having been neither convicted nor banned from holding public office. His lawyers feel that such a gesture could be interpreted negatively in Europe and note that he couldn't be a member of both the Catalan and European Parliaments at the same time.

The court's decision on Junqueras's immunity will be released on Thursday. The non-binding opinion from advocate general Maciej Szpunar support the pro-independence politicians' thesis. That said, he also noted that the fact that Junqueras has been convicted and sentenced could mean any immunity is voided anyway. Whatever it concludes on the Junqueras case, there are a further two questions it has to respond to presented by Puigdemont. 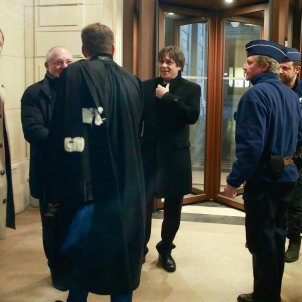