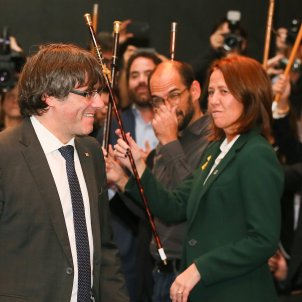 "Listen, Europe." That was the sentence heard most often this Tuesday in the event held by Catalan mayors in Brussels against the repression from Spain. Present were president Carles Puigdemont and the ministers with him in Belgium (Meritxell Serret, Lluís Puig, Toni Comín and Clara Ponsatí) as well as some 200 mayors. They all took advantage of the ceremony to call for Europe's help against what Puigdemont described as "Rajoy's coup d'état".

In an event clearly aimed at the international audience, which used five languages (English, French, German, Spanish and Catalan), president Puigdemont denounced the "coup d'état" of the application of article 155 and called for guarantees for the upcoming 21st December election.

Puigdemont demanded to be able to vote "without political prisoners, without police in the streets and without limits on ideas" and also asked for "respect for the result of the election". The president also said that fascism is still alive in Spain. "Listen, Europe. Today fascism is with impunity in Spain and taking part in demonstrations called by the party in government," he said.

As for the ministers, Toni Comín (Health) said that "Europe was born so that authoritarianism has no place in Europe" and that, as such, "it cannot ignore what's happening in Catalonia". The minister of Education, Clara Ponsatí, has criticised the opening of cases against teachers for talking about the referendum in schools, the Agriculture minister, Meritxell Serret, argued that they represented "the legitimate government of Catalonia" and the Culture minister, Lluís Puig, gave thanks to all the figures from Spanish culture who have communicated their support.

Almost 200 mayors have travelled to Brussels this Tuesday to denounce the repression of Catalan independence supporters by the Spanish state, and to condemn both the imprisonment of the other members of the Catalan government and the application of article 155 of the Spanish Constitution. Puigdemont thanked all those in attendance for their presence and said it was "very good to feel your warmth and your presence".

The president of the AMI (Association of Municipalities for Independence), Neus Lloveras, also made a call to the European Union. "Europe, help Catalonia please", she said, before describing the "disappointment" some Catalans feel in the face of the EU's "silence". The president of the ACM (Catalan Association of Municipalities), Miquel Buch, meanwhile, criticised that the Spanish government for wanting"to remove our government with a coup d'état, called [article] 155".

Puigdemont's successor as mayor of Girona, one of Catalonia's provincial capitals, Marta Madrenas, called for the EU to be involved in the 21st December election for there to be "guarantees". "We want someone to protect us. Who will defend us if they declare us illegal?," she asked. She said that in Catalonia "we're suffering a lot" and asked Europeans: "don't abandon us please". Maties Serrancat, mayor of Sabadell, Catalonia's fifth-largest city, also spoke, saying that the attitude of the Spanish state "is dictatorial" and criticised it for offering only one form of dialogue: "imprisoning".

Also to speak were MEPs from ERC (Catalan Republic Left), Josep Maria Terricabras and Jordi Solé and PDeCAT (Catalan European Democratic Party), Ramón Tremosa. They said that the Catalan issue isn't "an internal matter" and called on Europe to "listen to us and give us voice".

The act was also attended by a number of MEPs from different countries and various Flemish nationalist politicians, who Puigdemont thanked specifically for coming.

This morning, the mayors had protested in front of the European Commission to demand the release of vice-president Oriol Junqueras, the seven ministers and the two civil society leaders, Jordi Sànchez and Jordi Cuixart. 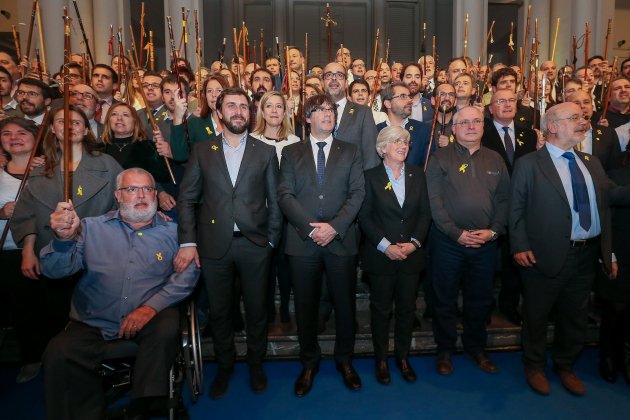 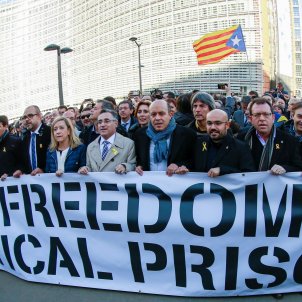