Six of the nine Catalan pro-independence prisoners will leave custody for a few hours on the 28th of this month. Specifically, the former members of the Catalan government, Oriol Junqueras, Raül Romeva, Dolors Bassa, Jordi Turull, Josep Rull and Joaquim Forn will be taken to the Parliament of Catalonia to appear before the commission investigating the 2017 suspension of devolved powers.

The department of justice authorised the plan this Friday, arguing that it's an "inexcusable duty at the request of the chamber". Ministry sources say that the secretariat for penal measures, rehabilitation and victim support "will guarantee their presence" at the Parliament. They confirm to El Nacional that that means they will be there in person, and won't appear by video link. That will make it the first time any of them have returned to the Catalan chamber since the day of the declaration of independence in 2017.

The parliamentary commission, headed by Antoni Morral (JxCat), started work in November 2018. It has summonsed the six members of Puigdemont's government now in prison, respectively the vice-president, foreign minister, labour minister, presidency minister, territory minister and the interior minister. It has not called, on the other hand, on the former speaker of the Parliament, Carme Forcadell.

Nor have they planned for the appearance of civil society leaders Jordi Sànchez and Jordi Cuixart. Having served a quarter of their sentences, both now have the right to request to leave custody for a limited number of days. Jordi Cuixart is already taking advantage of his first 48 hours out of custody; Jordi Sànchez will follow him, again for two days, on the 25. 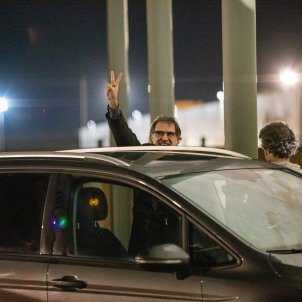