Fèlix Millet and Jordi Montull have been sentenced to 9 years, 8 months in prison and 7 years, 6 months respectively. Moreover, Millet former president of the Orfeó Català-Palau de la Música foundation, will have to pay a 4,120,540 euro fine (£3.66 million, $5.06 million) for money laundering and crimes against the tax ministry. Montull, his right-hand man, 2,998,284 euros.

As for Gemma Montull, Jordi Montull's daughter hasn't seen her agreement with prosecutors pay off. She has been sentenced to 4 years, 6 months in prison and a fine of 2,663,955 euros.

The sentence also requires Millet and Montull's wives to pay almost 7 million euros for subsidiary civil liability, a judgement also including Laia Millet, who held her wedding in the Palau.

The court acquits Rosa Garicano, former director of the Palau, and the directors of the companies Ferrovial and Publiciutat because the statute of limitations has passed. Ferrovial was the channel for influence trafficking and the payment of commissions between the Palau and Convergència.

Those are the main headlines of the sentence announced today in the case of the "pillaging" of Barcelona's Palau de la Música concert hall. The sentence is not final, however, and can be appealed to the Supreme Court. 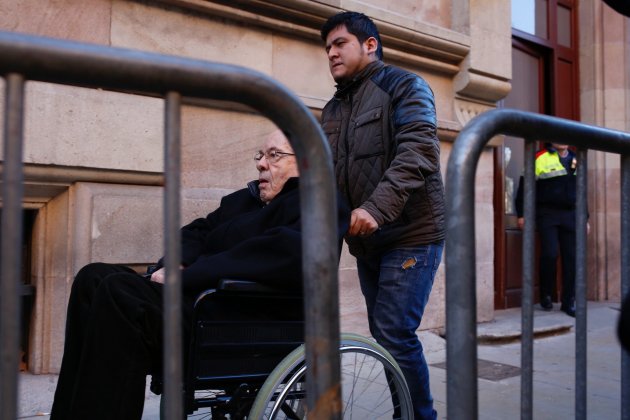 The "pillaging" according to the sentence

The scheme, according to the verdict, started by Fèlix Millet, Jordi Montull and Gemma Montull, allowed for the illegal sending of more than 23 million euros (£20 million, $28 million), the diversion for private ends (works in private residences, private travel, financing weddings, buying goods) of amounts in the millions, the paying of commissions to political party Convergència Democràtica de Catalunya, the payment of invoices for services not provided, the issuing of receipts for non-corresponding payments, as well as the corresponding fraud of the Tax Agency for the irregular liquidation of money transfers which either were not real or didn't correspond to the explanation given justifying them, income and donations which hid the true origins and destinations of the money.

According to the verdict, Fèlix Millet and Jordi Montull, counting since December 2003 on the indispensable contribution of Gemma Montull, "put into practice a strategy aimed at having available, illegally, numerous association, foundation and consortium funds, to use them for personal expenses by them or their families, or for unknown ends, but in any case completely alien to the ends and interests proper of the entities those funds belonged to".

Within the narrative of facts demonstrated during the case is that funds from the foundation, association and consortium were used by Fèlix Millet and Jordi Montull to pay large personal expenses, causing them unjust personal gain. Among those expenses, for example, were the marriages of Millet's daughters in 2000 and 2002. "The total foundation funds improperly destined to paying for the ostentatious weddings of Fèlix Millet's daughters was 164,269.93 euros," (£146,000, $202,000) says the court. For private travel, it adds, the total was 648,021.85 (£576,000, $795,000) euros. The quantity for works in private residences was more than one million euros.

Fèlix Millet and Jordi Montull sent, irregularly, a monthly quantity to certain people who carried out some unspecific collaborations with the Palau's activities, payments which reached a total of 719,758.45 euros. Similarly, a total of 778,428.85 euros were destined to paying invoices from Viajes Baixas for private trips taken by Millet and Montull with their families. A total of 3,741,898.82 euros were sent to third parties in payment for adjudications of public works which they mediated in. For this mediation, Millet and Montull received commissions for a total of 3,453,288.19 euros, which they split 80%-20%.

The amount the accused withdrew from foundation and association accounts in cash between 2002 and 2009 for purposes not relevant to the Palau de la Música, for their themselves or third parties, totals 14,366,555.46 euros. Of this total, at least seven million euros were appropriated by Fèlix Millet whilst Jordi Montull took 1,300,000 euros. The final destination of the other funds, 6,026,866.85 euros is unknown, nor to what proportion they came from the foundation and association's accounts. In any case, it has been confirmed that this quantity wasn't destined to any of the entities of the Palau, nor its accounts, nor to fulfilling the Palau's social missions.

The "criminal agreement" with Convergència

One of the actions through which Millet and Montull looked to and did obtain personal gain at the cost of the association and foundation was their mediation for the establishment and maintenance of a system through which the company Ferrovial-Agroman, through the payment of commissions to political party Convergència, obtained the adjudication of certain bids for the construction of public works in Catalonia, contests which were promoted by regional or local entities, where the governments were formed or led by members of the Millet-Montull group the court says. They say that Millet and Montull also agreed with Convergència's treasurer, Carles Torrent, without excluding the participation of others still unidentified or protected by the statute of limitations, that Ferrovial would give money to the party in exchange for being guaranteed a certain economic total of public works contracts annually.

The scheme was initially created by Millet and Montull, joined by Gemma Montull after she started at the Palau. They "put at the disposition of the directors of Ferrovial and members of Convergència the whole economic structure of the Palau, so that they could hide payment and charging, respectively, of the commissions".

The commission agreed between Ferrovial and Convergència was 4% of the total obtained from the decisions, to be split 2.5% to the party and 1.5% to Millet and Montull. That 1.5% was then in turn split 80% for Millet, 20% for Montull.

The "criminal agreement" continued uninterrupted from before 1999 to 2009, ending with the search of the Palau buildings agreed as part of the present legal procedure.

The illegal commissions were agreed by the accused Pedro Buenaventura and Juan Elízaga, with Millet, Montull, Daniel Osàcar and, before him, Carles Torrent, and were disguised for payment to the party.