The New York Times has strongly criticised the Spanish government's tackling of the coronavirus crisis, declaring that Spain is now "the latest epicentre of the virus." The US newspaper speaks openly of ineffectiveness.

The Spanish government declared a state of emergency on Friday, say the Times, "days after it allowed mass gatherings in the Spanish capital, and cases jumped to 4,200". "Just last weekend, about 120,000 people marched through downtown Madrid to celebrate International Women’s Day. Some 60,000 soccer fans filled one of the city’s largest stadiums. And 9,000 supporters of Vox, Spain’s third-largest party, gathered inside a former bullring," it says.

The US newspaper denounces the Spanish executive's clamorous neglect. "Spain now has the second largest number of coronavirus infections in European countries, after Italy - overtaking the larger nations such as France and Germany - and is facing the fastest spread of contagion in Europe", says the US daily. 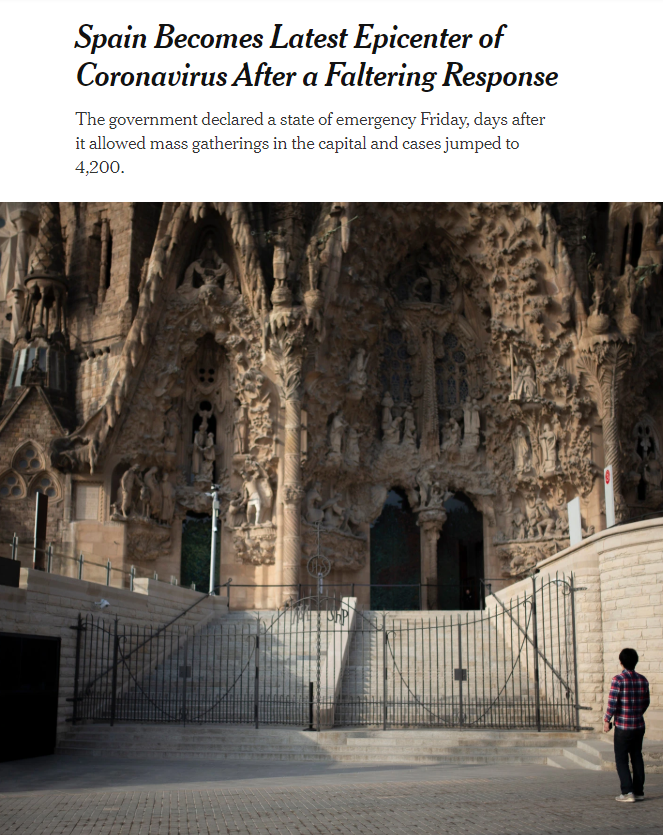 The New York Times has made it clear that Madrid's biggest problem is a "failure to take mitigating steps". "Although there have been significant outbreaks in Basque and Catalan cities, the Madrid region has become the epicenter of the crisis in Spain. On Wednesday, Madrid represented about half of all cases and almost two thirds of deaths," it said.

The newspaper reports the announcement of Catalan president Quim Torra that his government would put Catalonia into lockdown, for which he has requested the collaboration of the Spanish government, as one of the measures that is being attempted. "Catalonia, the region in northeastern Spain, said late Friday that it would start to “restrict entrances and departures” though it did not offer details".