Catalan police force the Mossos d'Esquadra have used their batons in charges against members of the pro-independence CDR groups who gathered in Barcelona on Saturday morning to show their opposition to the protest called by the police union Jusapol. The police strikes occurred when the demonstrators attempted to break the cordon of riot police that prevented them from reaching the city's Arc de Triomf, where the march organised by the pro-Spanish-unity police group was planned to end.

A major police operation kept the two protests apart and isolated the 400 people who answered the call from the CDRs (Committees for the Defence of the Republic) for a counterprotest. The Jusapol  rally - which attracted around 1,500 people, according to Barcelona police - took place without problems or interruptions.

Translation:
It is unheard of that they surround us while they let the fascists protest freely. Shame! — CDR Catalunya

The strategy used by the Mossos to avoid confrontation between the groups consisted of encircling the CDR that had assembled at Plaça André Malraux. About 25 police vans cordoned off the area to prevent the antifascists from moving in any direction to reach the Arc de Triomf. An apparent attempt by the participants in the counterprotest to move towards the closed-off area via the intersection of Ribes and Naples, was stopped by a police cordon at this point. 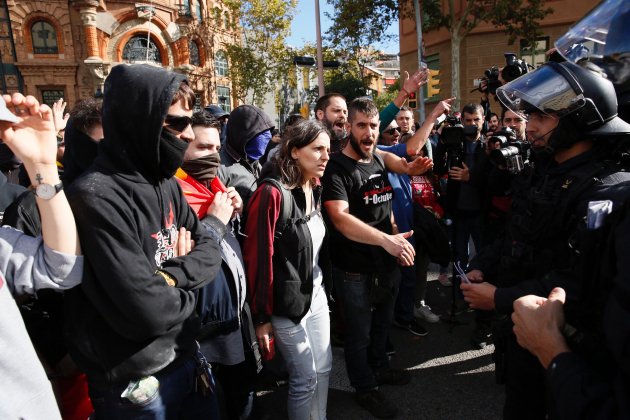 The police barrier raised tension among the CDR protestors, who kept trying to advance. The riot police then carried out two baton charges against the demonstrators to make them retreat, after some of the antifascists had thrown eggs and the occasional can.

"I am trying to make peace, but it's not easy", affirmed David Ogaya, one of the CDR member leading the protest. Ogaya commented that he thought the presence of politicians in the front row, directing the rally, would avoid most of the police charges.

Health Workers for the Republic

In order to prepare for possible injuries resulting from the Mossos' actions, several teams from the group Health Workers for the Republic were also present with the CDRs in the square. This volunteer group first appeared on 29th September at the equally-tense rally that day in Plaça Sant Jaume. "Slowly it has been taking shape. Somebody has to help the victims of the police charges", explained Miquel Pallarès, founder of the initiative, which is funded by donations. 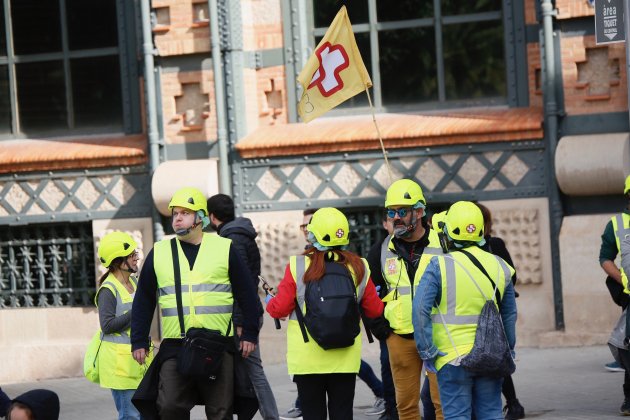 Meanwhile, the Jusapol protest took place without incidents thanks to the high police deployment. About 1,500 people turned up to take part from all over the Spanish state, gathering in Barcelona's Via Laietana at twelve noon, in a march which was officially convened to demand equality of wages and conditions across the different police forces. 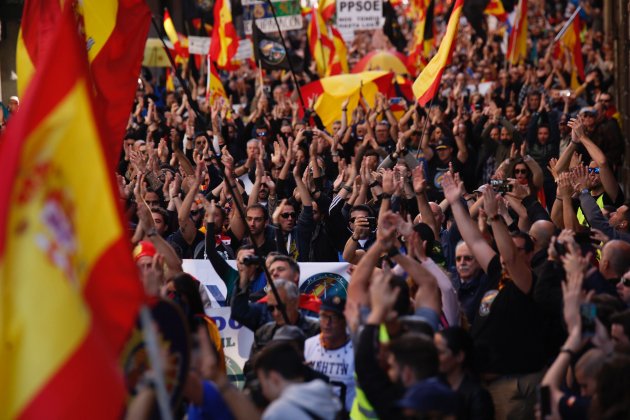 The festive atmosphere of the demonstration was noticeable from the start: while a group of demonstrators sang the Asturian anthem cloaked in the blue flag of the Atlantic coastal region, a man wearing a Basque txapela beret kept himself busy setting off fireworks. Enrique, a senior citizen taking part, went back and forth on his segway with a Spanish flag hung around his neck, shouting "Jusapol". 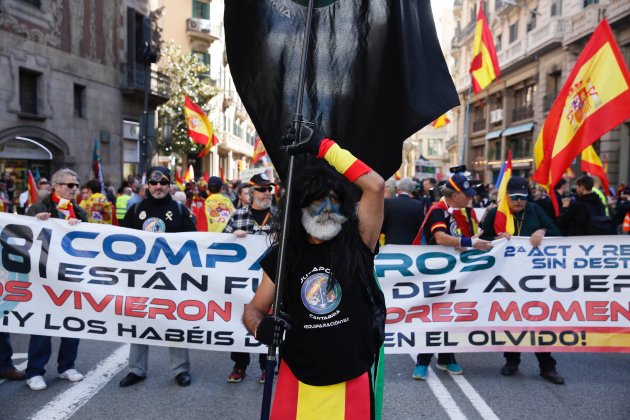 One of those who attracted attention at the protest was Alejandro León. An officer in Spain's National Police force, he has become popular among supporters of the force through the videos he shares on social media, where he has thousands of followers. "Some police officers don't want to criticise because they are afraid of disciplinary action.To me it's really all the same", asserts Jandro Lion - as he's known on Youtube-, who is indeed already facing a disciplinary report. 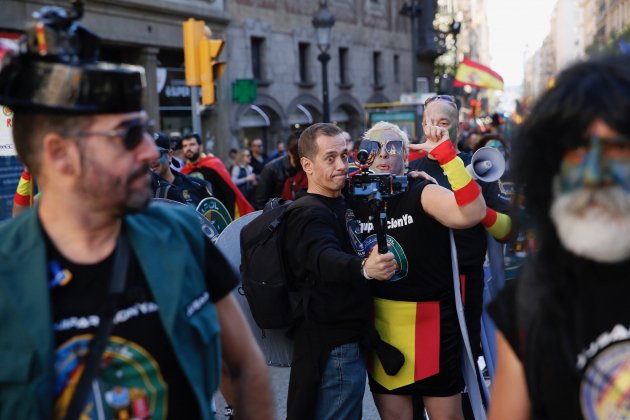 At the tail of the demonstration, Ana and Mercedes are already heading home. "We came to support the police because their wages are ridiculous", explain the women, encloaked in Spanish flags and wearing sunglasses. They affirm that the protest is not a homage to the police action on 1st October, when over 1,000 Catalan voters need medical attention after police repression of the  -independence vote. "The Civil Guard and National Police are true Spaniards. By contrast, the Mossos are traitors", says Mercedes before disappearing into the tide of protestors wandering homeward.