Jordi Turull, Josep Rull and Joaquim Forn have arrived this lunchtime at Lledoners prison, in Sant Joan de Vilatorrada, an hour inland from Barcelona by road. It's the same centre which Oriol Junqueras, Raül Romeva, Jordi Sànchez and Jordi Cuixart were moved to a week ago.

Like last week, they went first to the prison Brians 2 from where they were taken in two small vans to Lledoners by the Mossos d'Esquadra, the Catalan police. One white, one red. They were met at the prison gates by members of the Committees for Defence of the Republic (CDR) shouting "we're a republic" and "release [the] political prisoners". 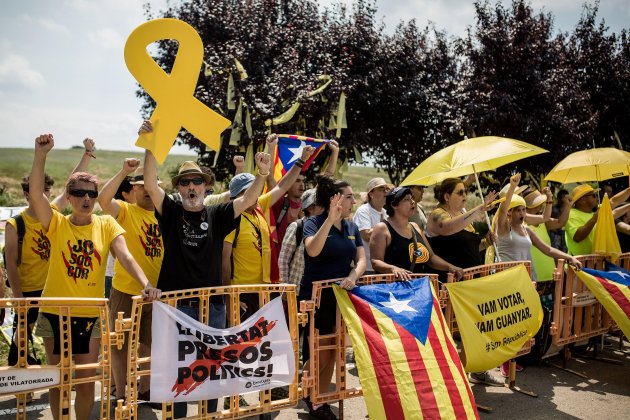 Turull, Rull and Forn entered the admissions wing, but will move to wing 2 to sleep tonight.

Another CDR rally is planned for 7pm tonight, like there was last week, in opposition to the holding of the political prisoners.

With the three moved today, all the political prisoners are now in Catalonia. The male ministers and the 'Jordis' are in Lledoners and Dolors Bassa and Carme Forcadell in Puig de les Basses, in Figueres, near the French border.

Turull, Rull and Forn arrived at Brians 2 prison this morning from Zuera prison in Zaragoza, Aragon. Once in Catalonia, the Civil Guard handed them over to the Mossos.

They left Estremera prison near Madrid early yesterday morning and, after being gathered together with other inmates at Valdemoro prison, they started the journey to Catalonia.

They will be held in wing 2 at Lledoners, alongside Junqueras, Romeva and the 'Jordis'. They will have the customary medical checks in their first hours; from tomorrow they can receive normal visits. It's expected that among these visitors will be president Quim Torra.