Rovira tells the judge she proposed suspending the referendum, Puigdemont said no 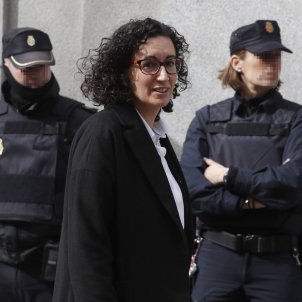 ERC's secretary general, Marta Rovira, has told a judge that the, on 1st October, during a meeting with members of the Catalan government and pro-independence parties, she proposed suspending the vote given the police violence seen but that everyone present, including president Carles Puigdemont, refused. With respect to the unilateral declaration of independence, Rovira, who has disassociated herself from the preparations for the referendum, told Supreme Court judge Pablo Llarena that it was a political declaration with no legal effect to start a later electoral period.

The politician replied to questions from the public prosecution and her own lawyer as well as some questions from the judge. In response to Llarena, she said that she knew of the independence "road map", that she signed it in March 2015 on behalf of ERC and that she attended all the meetings called by Carles Puigdemont.

About her meeting with president Puigdemont on 14th November, in response to questions from her defence, Rovira said that it was in order to make it clear to him that ERC wouldn't allow a block in the Catalan Parliament.

"I tried to go to all the meetings Puigdemont called me to", Rovira said according to legal sources present during her testimony, which lasted a little over two hours.

Consuelo Madrigal questioned Rovira, representing the public prosecutor together with Jaime Moreno. Both of them have already following the testimony of the others under investigation.

The judge has decided to leave Marta Rovira free on bail, set at 60,000€ (£53,000, $74,000), as called for by the public prosecution and the state's legal service. Political party VOX, who have brought an acusación popular private complaint in the case, asked for preventive detention without bail, which the judge rejected.

The judge will tomorrow release his order which will set how many days Rovira has to post bail.

As she left the court, Rovira gave brief comments to the media: "We've defended the Parliament's deputies carrying out their work. At the same time we've also defended, in exercising the functions attributed to them in the Parliament, the right of the citizens of Catalonia to vote and express their opinions in a democratic, law-abiding state". She left as the group who had gathered to support her applauded and shouted her name.

In a statement, ERC has detailed other points of Rovira's testimony. "She has defended democracy. She reminded the judge that the Parliament of Catalonia already approved a declaration of self-determination in December 1989 and that, at that time, as there was no pro-independence majority, it wasn't considered important," it reads, "It cannot be that, when the independence movement was a minority position, there was no problem, and now that it's a majority, it's a crime. That's clearly anti-democratic and violates all the principles of a democratic, lawful state."

Rovira also defended parliamentary inviolability and argued that it's not up to deputies to make a prior check of constitutionality and that, as such, their votes are absolutely protected. 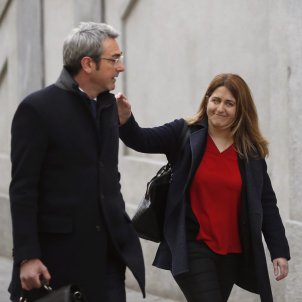