Junqueras and Romeva from prison: "We're not renouncing anything"

Cambrils, in the south of Catalonia, has this Sunday welcomed the first election campaign rally to feature Oriol Junqueras and Raül Romeva from Soto del Real prison. In front of an excited crowd of hundreds of people closely following their every word, Junqueras exhorted ERC to win Catalonia in the Spanish general election on 28th April, ahead of "those who are keeping us in prison, knowing that we're innocent" in order to embarrass them.

"Win, win and win. Give your all. You have to do it for yourselves, for us and for everyone who loves us", was the message from Junqueras, the party's president and first on their list of candidates for Congress. He added that "you have to make us free with your votes".

Junqueras called on ERC voters to feel proud of their party's project and work because they're doing it "for everyone" and "for a better country". He also urged them to work to win the local and European elections in May, saying that the more elections they win, the greater chance there is for them to realise their objectives. He asked those present to fill the ballot boxes "with hope" and to mobilise as many people as possible.

Reception of the prisoners

Junqueras and Romeva appeared by videolink from Soto del Real prison in Madrid. They were standing up, dressed in suits and appeared determined and upbeat. Their first appearance on the campaign trail sparked loud applause from the audience, who repeatedly shouted slogans in favour of their release.

Present in person at the rally was Gabriel Rufián, the second name on the party's candidacy for Congress. He took the opportunity to attack Ciudadanos, labelling the party's leader in Catalonia "Ibex Arrimadas" (her real name is Inés Arrimadas; the Ibex 35 is Spain's main stock index). He also said her party doesn't represent the workers from Andalusia and Extremadura who migrated to Catalonia in the 60s, but the "gentlemen who threw them out". Responding to another of their talking points, he said that it's not the Catalan grassroots Committees for the Defence of the Republic that are dangerous, but "a miserable king who sells weapons to Saudi Arabia".

Rufián said only ERC can prevent Ciudadanos taking power with PSOE, sending a message to the whole independence movement to beat "the jailers of Oriol Junqueras and Raül Romeva" in the election. His speech was briefly interrupted by two protesters insulting him from a balcony.

Many of the leading figures from the party were present at today's event, including its deputy president, Pere Aragonès, who's also vice-president of Catalonia. In his speech, he said the prisoners appeared "stronger, greater and more alive than ever". Given the latest surveys, showing tight competition between ERC and PSOE for first place in Catalonia, Aragonès said that "either those who have no problems in reaching an agreement with Ciudadanos win, or ERC does".

He also had a message for prime minister Pedro Sánchez that they won't apologise for anything, or renounce anything. "We're committed to independence. We're standing in this election to dye the country with republican yellow and feminist lilac and to show that we want the independence of Catalonia," he said. He also called on supporters to not forget the double election on 26th May, with votes for town councils and the European Parliament. 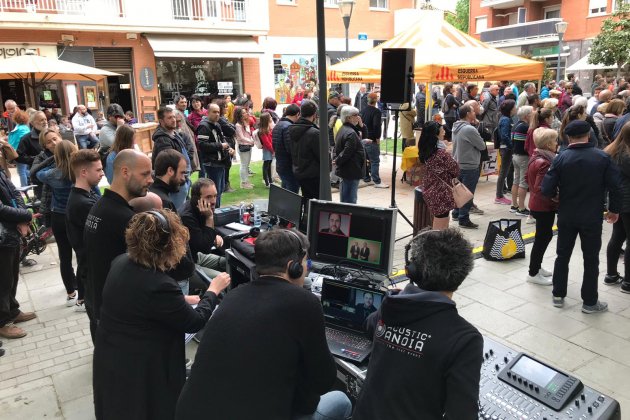 ​Finally, Joan Josep Nuet, fourth on the party's list for Barcelona and member of Sobiranistes, argued the election isn't about "winning a handful of votes", that "the battle for freedom is at stake". As such, he said that "when it's about freedom, you can't do the same things as always, we have to do different things which are up to it". "Do you believe that, having prisoners, it's not worth going to vote on the 28th April, with your two hands and your heart?" he asked.

Some 850 people attended the event, according to the party, which would be even more than their main event last week in Barcelona, which attracted some 700.