Madrid criminal lawyer Gonzalo Boye has found himself, for the last few hours, in the eye of the news storm because Spain's National Audience has ordered searches of his personal residence and his office. For the last two years, Boye hasn't been just any old lawyer in the eyes of the Spanish state since he's in charge of the defence of, among others, the president in exile, Carles Puigdemont, and has become a true headache, since his legal victories have been important and both the Belgian and German courts have laid bare the position of the National Audience and the Supreme Court on the matter of the European Arrest Warrants against the exiles. To that you add a very intense public activity and a presence in the media which enormously bothers the deep state with his strength and his accusations. It's not worth speculating much on the reasons for these searches: it's hard not to think that what's important is not the legal reasons they may give, but trying to look to crack his credibility and question his actions as a lawyer at a crucial moment in the former president's Belgian case.

The moment chosen, as such, isn't innocent either: there's a week and a day until Carles Puigdemont has to appear before the Belgian justice system in the first of the steps of the new European Arrest Warrant issued by Pablo Llarena which called for his immediate arrest. Boye's role, as Puigdemont's personal lawyer, isn't minor these days and anything that means getting him off the exiled president's defence team is welcome. Moreover, last week, the Belgian judge in the case counted out the possibility of his immediate arrest and left him free without bail, with only the requirement to communicate his place of residence, trips and activities. Very little compared to what the Spanish state hopes for. There was, beyond a first legal victory, a delicate situation for the Spanish police and justice system: they were unaware for many hours that he had presented himself at a legal office in Brussels once the European Arrest Warrant, now translated into one of the three official languages, French, Flemish or German, or English, had reached the capital. That same day, Thursday, Pedro Sánchez was at a Council of Europe meeting a few hundred metres from Puigdemont but unaware of everything that was going on. With dawn on Friday, the Spanish police found out, the justice system shortly after and the Moncloa government palace later. When political life was starting on Friday it was revealed and mid-morning, Puigdemont was already in the street making statements.

Coincidences happen in life; in politics, almost never. In the same way that there was a timeline in the Spanish Supreme Court to try the political prisoners, there's another timeline of the different phases to install the narrative of violence and terrorism in Catalonia and to blame the Catalan government for it all. It's been called the Basque template since many of the state's actions are identical but what's happening is that in Catalonia the pro-independence movement is of a pacifist mould, its political leaders are too and the tried and charged political prisoners as well. As could already be seen in October two years ago, the repression doesn't have a single face. Now, with the Boye case, the jump is important, even if only because he's a lawyer. Certainly, it happened in the Basque Country with ETA's lawyer, but the thing is that the state's narrative in Catalonia doesn't hold up to the slightest questioning.

The context of the repression, order and Franco to try to come back in an election in which PP is ever closer behind and with Vox very far from floundering. A crazy path, completely mistaken, and who knows if it will end up costing Pedro Sánchez victory on 10th Novemeber. Because that's what they're thinking of: victory day. 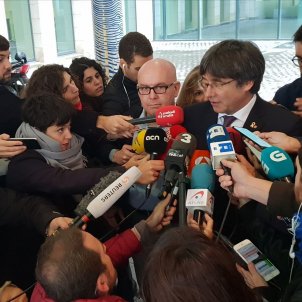 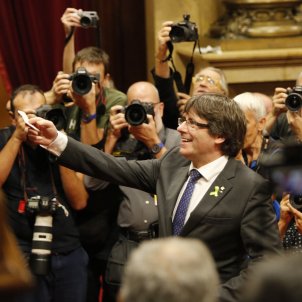 Editorial Sánchez, disloyalty is this: not even answering the phone José Antich