Jordi Sànchez and the normalised abnormality

At half ten yesterday evening, staff of news agency EFE in Barcelona received the decision from Spain's Central Electoral Commission allowing them to hold a press conference with Jordi Sànchez on the occasion of the campaign for the 28th April Spanish general election. The journalists would be in Barcelona; the candidate in Soto del Real prison near Madrid.

Actually, the chronicle of how the event went should be written by the technicians who went to the prison and their colleagues working from outside who managed in a very short space of time and in the face of a whole host of difficulties to get it all working.

At 10:58 this morning, in the building's lobby, we were told that, in the memorable words of post-modern philosopher José María Aznar: "We're working on it".

At 11:05, a Prosegur security guard, who had taken the name, ID number and outlet of every journalist, photographer and camera operator there asked us to follow him. And we did, to the door of the Can Tiana room.

At half 11, the number two on JxCat's list of candidates for Barcelona, Laura Borràs, walked past us and into the room, accompanied by the list's number 6, Francesc de Dalmases, and a number of the party's press and social media people.

We finally entered at 11:36. At the monitor which we'd follow the press conference through, there was a techie talking on his phone. He said he was waiting for them "to validate it".

Leandro Lamor, EFE's managing director in Catalonia, took to a microphone to explain the two rules we had to follow: 1. last question at 12:25 because the prison would cut the signal at half past on the dot; 2. one question per outlet with no follow-ups to give as much time as possible to as many as possible.

At 11:43, Jordi Sànchez appeared on the screen. Immediately, I saw people on Twitter posting photos of the candidate in front of a Spanish flag and a portrait of the king. I thought I'd got lost and missed them, not paying enough attention. But no. It turns out that the signal we were seeing wasn't the same as the one you could see on any TV channel. If you look closely, to the right of the screen (Sànchez's left), there was a phone. Well, we got our image through that phone, giving us a side view. 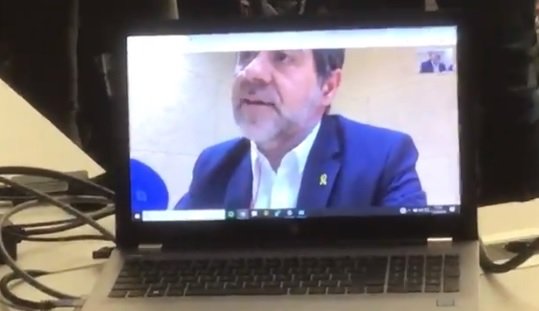 Sànchez gave a brief introduction then, at 11:55, came the official start of the first election press conference in history where the candidate was in a prison 600 kilometres away from where the questions were being asked after 550 days behind bars. And that, which can seem so normal now, isn't. Not at all.

If I'm not mistaken, there were 15 questions. On the four-way debate between the main Spanish candidates, pardons, joint pro-independence candidacies, dialogue, the current deadlock in Catalonia and possible solutions, the negotiations for a possible self-determination referendum, Podemos' support for a referendum, the mandate from the 2017 referendum, relations with ERC, the proposal for two referendums, the question of supporting a potential re-investiture of Pedro Sánchez as prime minister or not, the possible re-running of the election (as in 2015), on the compatibility of seats in the Catalan Parliament and Madrid Congress (he'd leave his seat in Barcelona, giving the pro-independence side an extra vote), the possible PSOE-Cs pacts, the application of article 155 of the Constitution and on coordinating the campaign between himself in prison and his fellow candidates outside.

At 12:27, a phone rang. It wasn't red, but practically. It was the channel by which the prison warned us there were three minutes left. Time for his final message asking for people's votes and the now famous phrase "llum als ulls i força al braç" ("light in your eyes and strength in your arms"), and a final comment of support for the journalists there: "don't get too tired during the campaign".

And the screen turned off. And the press conference was over.

And we all set about writing our articles. And Jordi Sànchez, they said, joined the others for lunch.

We were here in Barcelona; he was in a prison 600 kilometres away after 550 days behind bars. In 51 days, the time in jail will pass the number of kilometres. And that seems normal. But it isn't. And then Laura Borràs passed by me, leaving the room to go to another event, her face glum.

The face of reality when you realise that what happened today seems normal but isn't. Not at all.