From the moment that Carles Puigdemont was arrested by Italian police in Sardinia on September 23rd, international media have once again carried reports on the ongoing political conflict between Catalonia and Spain on their front pages. Today, the Court of Appeal of Sassari has decided to suspend sine die the procedure it had open on the possible extradition of the exiled Catalan president to Spain and, once again, the world has spoken about it.

The articles make it clear that the future of the case still depends, on the one hand, on the preliminary questions presented by judge Llarena to the EU Court of Justice, seeking to clarify the Belgian judiciary's decision not to extradite Catalan minister Lluís Puig, and on the other hand, on the request for interim measures that Puigdemont's defence presented last Friday to the EU General Court, demanding that his immunity be restored since there is a risk that he will be arrested. Of course, there is another factor on which the texts agree: the visible euphoria as the exiled Catalan leader left the court today.

Here's how some key international media worded their headlines and reports on the matter:

As the Italian newspaper reported, the courtroom used for today's hearing was named in memory of Giovanni Falcone, an Italian judge known for his attempts to dismantle the mafia, who was assassinated in Palermo in 1992. Puigdemont tweeted: "Only a just decision could come out of a courtroom bearing that name." 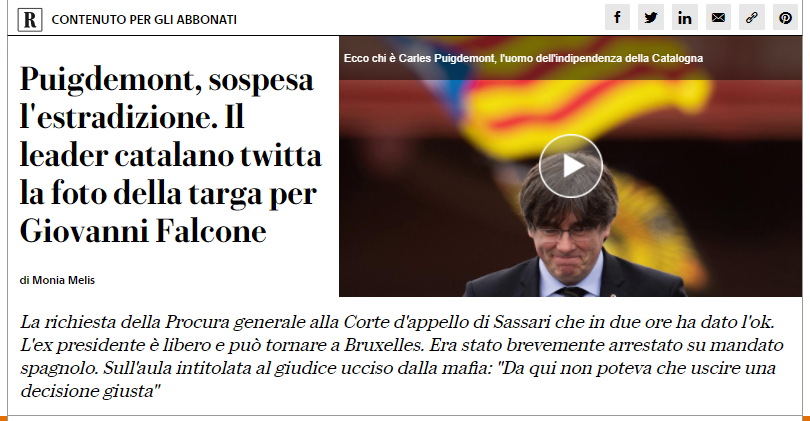 Says the agency: "Puigdemont and fellow separatists Clara Ponsatí and Toni Comín had their immunity as European Parliament members lifted earlier this year as requested by Spain after the European Union’s general court said that they didn’t demonstrate they were at risk of being arrested."

As the report also mentions, "Puigdemont was arrested on Sept. 23 in Sardinia." 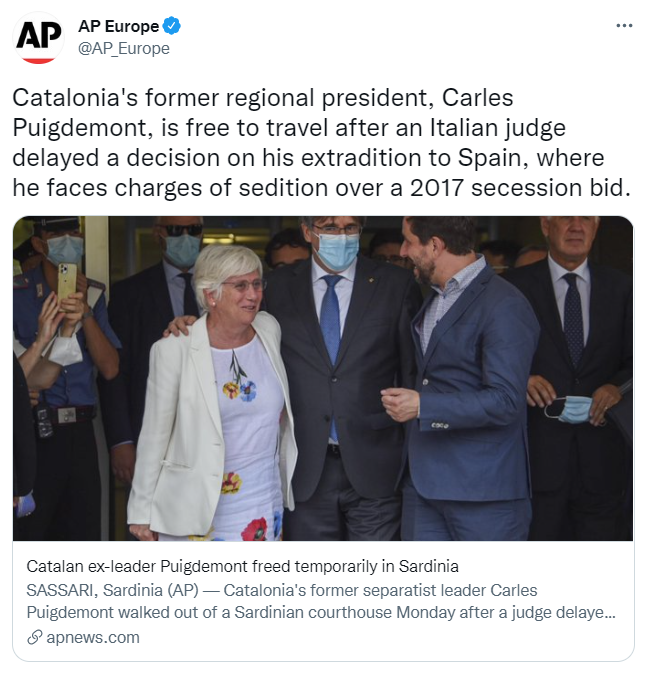 "Puigdemont was greeted by supporters who shouted "Freedom! Freedom!" and waved Catalan independence flags outside the court, where he was accompanied by two former Catalan regional ministers."

"Although [other pro-independence leaders] were pardoned earlier this year, Madrid still wants Puigdemont and the others to face justice over the secession bid," says this report.

"Puigdemont walked out with his lawyer, shook hands and embraced supporters, saying he was 'very happy' as he got into a van and was driven away."

The Guardian notes how "prosecutors asked the judge to suspend Puigdemont’s extradition proceedings, a request the judge does not have to accept, but it does signal that there is no desire to extradite him to Spain." 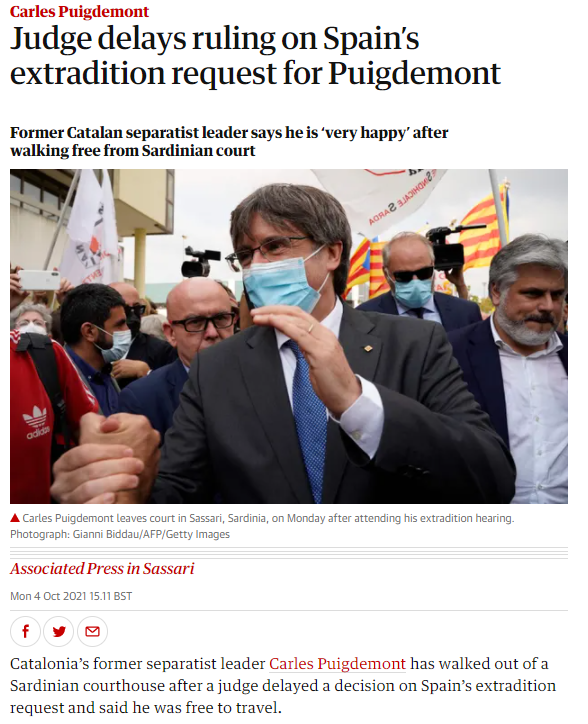 "Spain is demanding that the Italian authorities extradite the former Catalan regional president. But this will not happen for the time being. The judiciary wants to wait for the procedure in the EU Court of Justice first," says FAZ

"He travelled to Sardinia from Brussels with the two Catalan MEPs Toni Comín and Clara Ponsati on Sunday" notes Frankfurter. "The Spanish Supreme Court on Monday called on the Italian judicial authorities to extradite not only Puigdemont but the other two Catalans as well."

"Earlier Spanish extradition requests for Catalan separatists had already been disregarded by courts in Belgium, Germany and Scotland." 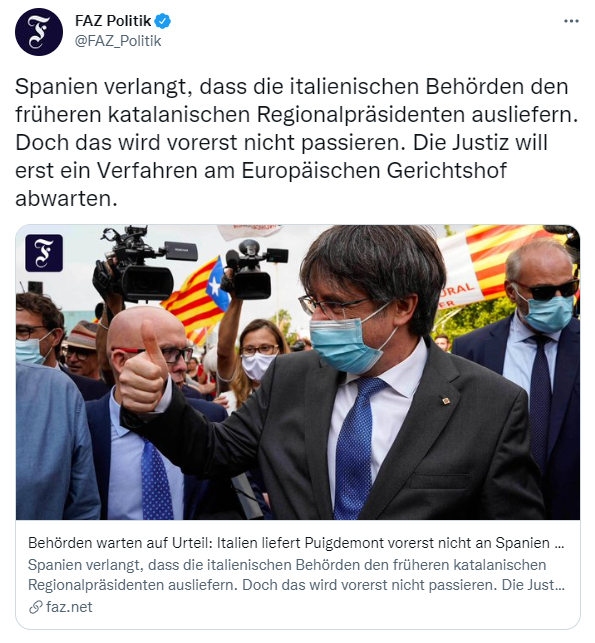 Said the German public broadcaster: "An Italian court has suspended a case relating to the extradition of the former pro-independence leader of Catalonia, Carles Puigdemont, to Spain. He is being sought on charges of sedition."

"He was previously arrested when he arrived in Brussels after exiting Spain in the wake of the street and police violence surrounding Catalonia's ill-fated independence bid in 2017."

"All his arrests are on a European warrant put forth by Spain." 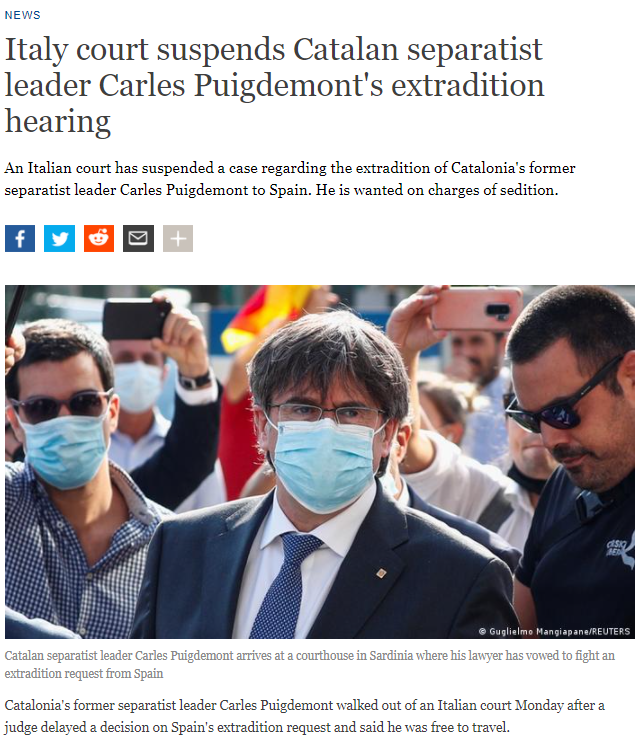 "Applauded as he left the Sardinian court, the leader has obtained a deferment." 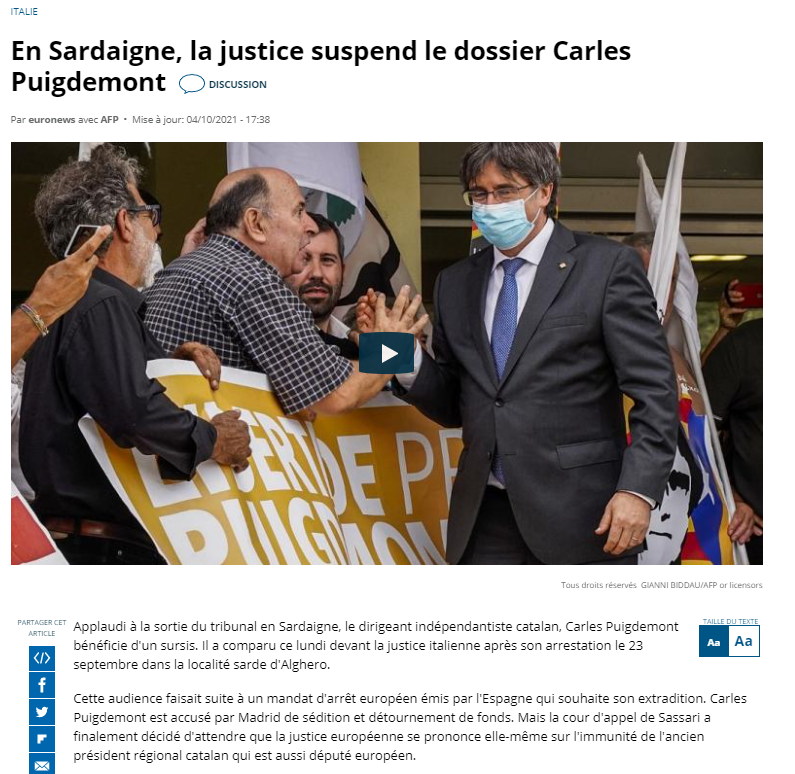 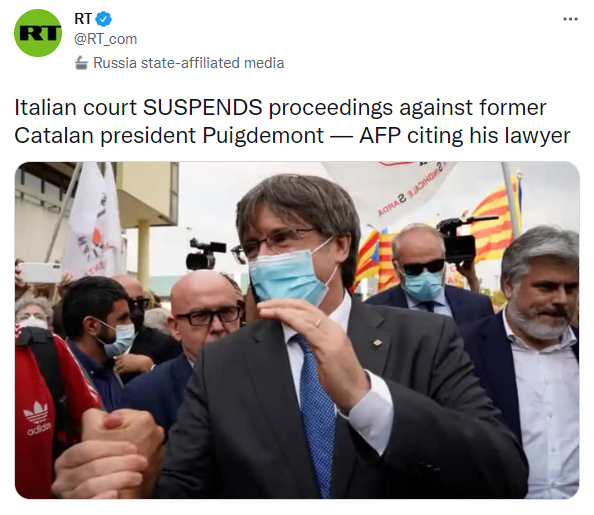 Puigdemont, from the city of l'Alguer

The Catalan president in exile, Carles Puigdemont, has responded to the decision of the Court of Sassari, in Sardinia, to suspend the European Arrest Warrant procedure against him, by addressing a direct message to the Spanish state. "It's time to say to Spain: 'Enough!'" he stated after recounting that in the last four years all the courts that have seen his case have ruled in his favour. Puigdemont called for self-criticism by Spain and was adamant that the path the Spanish state is taking will not end the conflict: "This is not the way."

Main image:  Catalan president in exile Carles Puigdemont, as he left the Court of Sassari, in Sardinia / Europa Press