Homage to Forn outside prison, the largest ceremony on attacks' anniversary

Today's homage to minister Quim Forn in front of Lledoners prison turned into the largest ceremony in terms of number of attendees for the first anniversary of the attacks in Barcelona and Cambrils. Despite the rain only having offered brief moments of respite, hundreds of people attended, having travelled there by car, coach and even tractor. No official attendance figure has been announced, but the total is calculated to have been in the thousands.

Quim Forn was Catalan interior minister at the time of the attacks in Barcelona, the senior official in charge of the response. He was later sent into pretrial detention for his role in the organisation of last year's independence referendum and the following declaration of independence by the Catalan Parliament. He has been in custody since November last year.

The ceremony started an hour late, after president Quim Torra and the members of the Catalan government with him, including vice-president Pere Aragonès, met with Forn and the others in the prison. There were also difficulties arriving for some of those due to speak between the weather and the traffic trying to get to the prison.

By the time the speeches started, attendees had already been shouting slogans in favour of the prisoners' release and Catalan independence for hours, as the rain fell, at times very heavily. The event ended up becoming a show of strength of the independence movement, as emphasised by the speeches. "You're not alone", was one of the most-repeated lines, as was a call for independence supporters to remain united.

"Dear friends, thank you for getting wet. Thank you for taking the plunge every day for national rights, for human rights, for the right to self-determination and for the independence of Catalonia", started Torra after greeting the attendees in the front row.

At Lledoners with the president and vice-president were ministers Elsa Artadi, Alba Vergés and Miquel Buch, the first deputy speaker of the Catalan Parliament, Josep Costa, PDeCAT's number two, Míriam Nogueras, and Congress deputy Joan Tardà (ERC), among others. 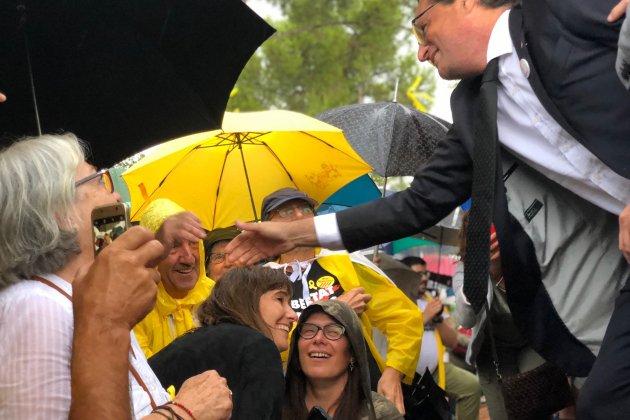 The president quoted words from the president of Òmnium Cultural, Jordi Cuixart: "We aren't going to defend ourselves, we're going to attack this unjust state". "We don't have to defend ourselves from anything because Europe has said we're in the right. If Europe reaches one verdict and Spain the opposite, who's got the problem," he asked.

During his speech, the president called to start a "march for this country's social, civil and political rights" until the Catalan republic is realised. "We won't stop", he said, whilst those present replied "ni un pas enrere" (not one step back). 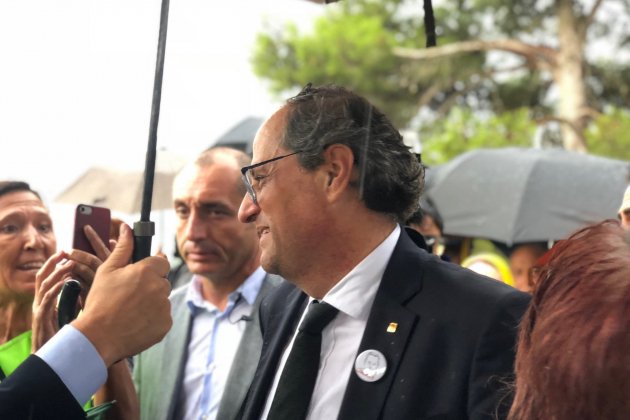 Accompanied by the vice-president and different members of his cabinet, Torra said that his government is committed to this and it won't stop until the prisoners are free and the people of Catalonia "are free too".

Quim Forn's wife, Laura Masvidal, speaking on behalf of the Catalan Association of Civil Rights, became one ceremony's key figures. Torra held her up as a symbol of all those being persecuted, whilst the vice-president of Òmnium, Marcel Mauri, said she was an example of the strength of all the relatives of the prisoners.

For her part, Masvidal once again denounced the violation of civil rights being suffered by the prisoners. She said that within the prison they'd also paid homage to the victims of the attacks. Forn's wife, visibly emotionally, showed a t-shirt signed by prisoners and guards and given to her husband.

When it was Mauri's turn to speak, he said that the Lledoners ceremony was the true homage to the victims of last year's attack, not the ceremony in Barcelona this morning.

Paluzie's warning to the Mossos

The president of the ANC, Elisenda Paluzie, said that Catalonia "felt like a state" after its response to the attacks. That didn't stop her, however, from criticising the Mossos d'Esquadra, the Catalan police, for having tried to remove a banner opposing Felipe VI before the ceremony in plaça Catalunya today. She called for them to regain their role guaranteeing freedom of expression.

"There were moments tonight which weren't like that. We trust that the government will take note and solve the problems which could be posed. We're here to help. We need that communion of the 1st October [day of the referendum], we need exemplary police forces always guaranteeing rights and freedoms," she said.

The event was opened by the president of the AMI, Josep Maria Cervera, who highlighted the work done by the Mossos on 17th August last year and called for answers to the various questions still open relating to the attacks. There was also a manifesto read in support of the minister and the Mossos.

The speeches also remembered the then head of the Mossos, Josep Lluís Trapero. Among others, by firefighter Patricia Nubiola. Also, a group of a progressive lawyers in togas unfurled a banner caling for democracy and justice. 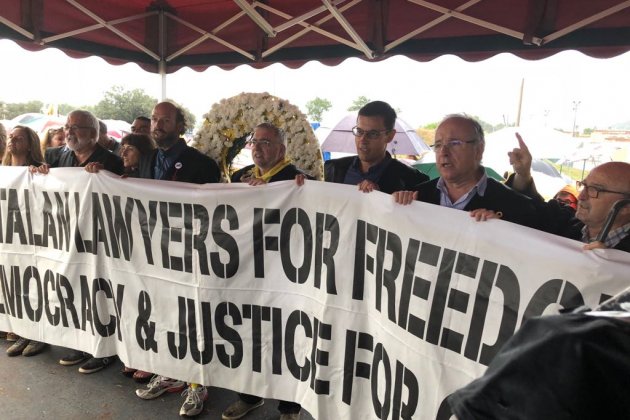 After the ceremony, some of those attending continued shouted slogans in support of the prisoners, belieing they could be heard within its walls. The rain had already stopped. 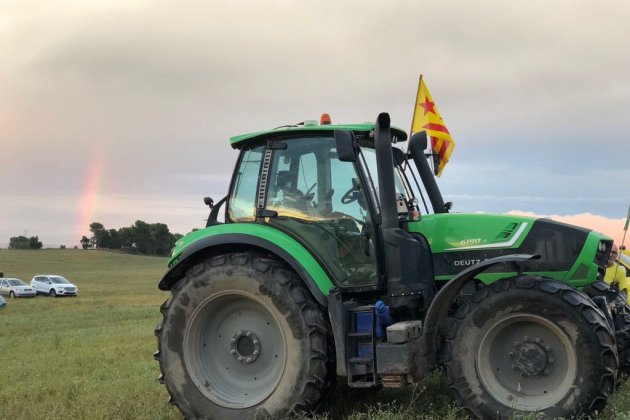