"After the regional vote in Catalonia, the Federal government calls for all possibilities for dialogue to be used." "The regional election was a consequence of the 'well known developments, particularly the unilateral declaration of independence by the Catalan Parliament'," said Demmer. "As a result of the election, the separatists will again take a majority of seats in the Catalan Parliament", says a press statement from the government entitled "To overcome current division".

"Now it falls on the deputies to form a government", said Demmer in a government press conference. "'We hope that the current divide in Catalonia’s society is overcome and all Spain’s political power is used to design a joint future.' In doing so, each government will have to act on the basis of the rule of law and the Spanish constitution," continues the press release.

They end by asking for all participants to work on deescalation. "From the federal government’s perspective, it is also important to achieve reconciliation within the Spanish society, in the interests of everyone in Spain and within the country’s legal and constitutional systems.” The federal government trusts that all actors in Spain are pursuing this goal and that all opportunities to talk and to deescalate [the situation] will be used."

The statement insists that all options should be explored to try to solve the situation. "After the regional election, the federal government hopes that “it will be possible to overcome Catalonia’s current division and use all Spain political power to design a joint future.” All opportunities for deescalation must be used." 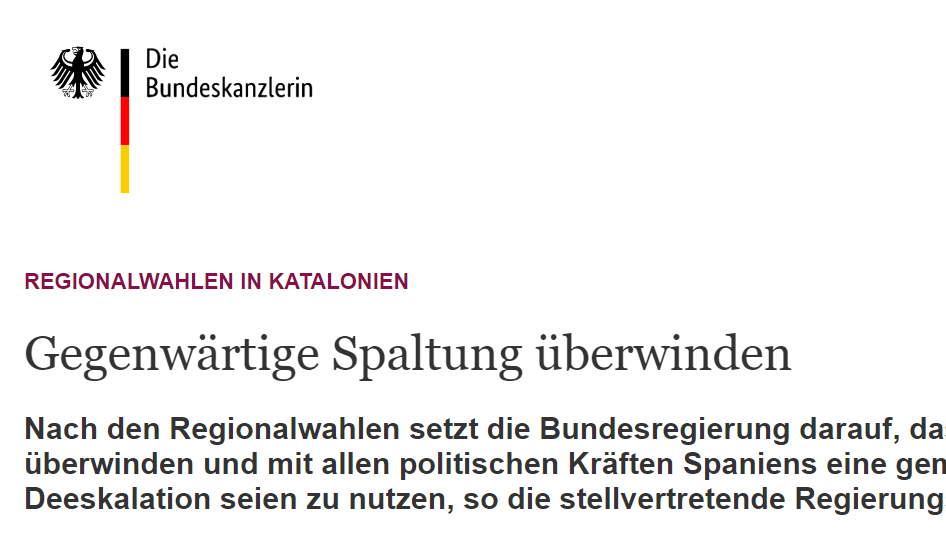