Just hours after the attacks at Barcelona and Cambrils, Spanish newspaper El Periódico claimed to have "exclusive" information suggesting that the CIA had warned the Mossos d'Esquadra (Catalan police) about the possibility of an attack on the Rambla in Barcelona. This report was contradicted by the Catalan president, Carles Puigdemont, the Catalan Interior minister, Joaquim Forn and the head of the Mossos, Josep Lluís Trapero. The last denied it again this Monday on Catalan radio.

This week, the same newspaper published the alleged note in an article signed by its editor, Enric Hernàndez. The say they didn't bring it to light in June to not "create unjustified alarm". According to the document, the US intelligence agency had directly contacted the Mossos to warn them they had evidence that Daesh (Islamic State) were planning an attack in Barcelona this summer, on the Rambla specifically.

Social media users, including Wikileaks and its founder Julian Assange were quick to question the veracity of the document, raising questions about its style and the quality of the English.

Translation: By the way, in English "Irak" is spelled Iraq ("Irak" is how it's written in Spanish...

Finally, the note says that the information is "unspecified" and "unsubstantiated" and doesn't say what form the attack will take. In other words: It's not a warning.

After an avalanche of criticism and jokes at the expense of El Periódico for the supposed note, the newspaper published a second attempt to win credibility. Hours after publishing the content of the note, they have released the heading of the supposed document.

This new version of the note includes a number of fields, for example "classification", "date", "from" and "to", the majority of which are empty. The few that are filled in indicate that it was sent on 21st August, four days after the attacks, to CITCO, the Spanish "Intelligence Centre for Counter-Terrorism and Organised Crime", under the title "Text of nota [sic] sent to Mossos on 25 May".

These new details open new questions. Why, on 21st August, after the attacks, would the US intelligence services have re-sent a message to CITCO sent to all of Spain's security forces three months earlier? Why does the message only mention the Mossos?

It also stands out that Enric Hernàndez, El Periódico's editor didn't sign this second article, unlike the first. This report is attributed to "El Periódico / Barcelona".

In this edited version, some of the widely-criticised errors that appeared in the initial document have been corrected. The 's' at the end of the word "administratives" has been deleted, the 'k' at the end of "Irak" has been changed to a 'q' and, finally, the quotation marks that opened and closed the text have been changed from « and » to " and ".

The newspaper justified these changes saying that the source asked at the last moment for them to change "the original font family for any other". This changed would have "logically and automatically", they say, caused the change in the quotation marks that appeared in the first text. In the same "substitution process", they continue, the 'k' "slipped in by mistake" instead of the 'q'. This same error was explained differently by the newspaper's editor yesterday morning. Hernàndez related it to the "affiliation or nationality of the author", which he didn't know.

Yesterday evening, they were able to publish the full original alleged note because "the source has freed the newspaper from the maintenance of the aforementioned conditions". 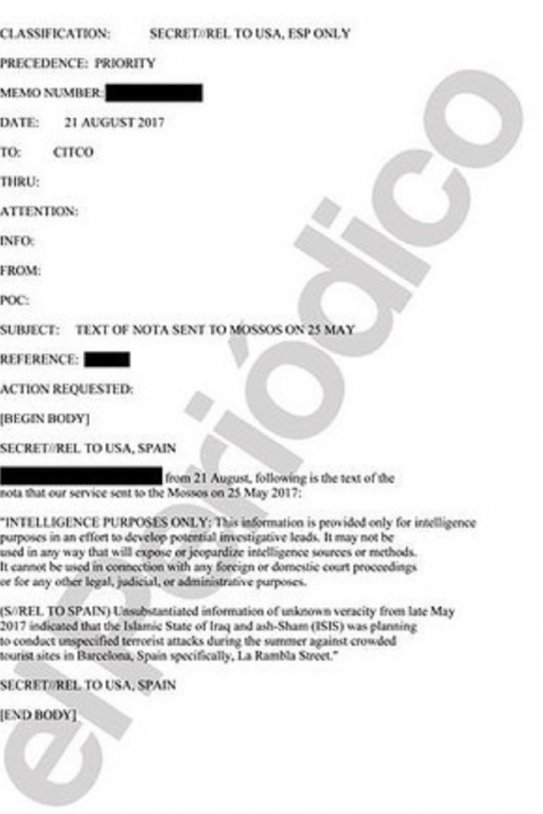 In fact, El Periódico's front page this Friday opens with the news "New notes from the CIA demonstrate contacts with 'the Mossos'". 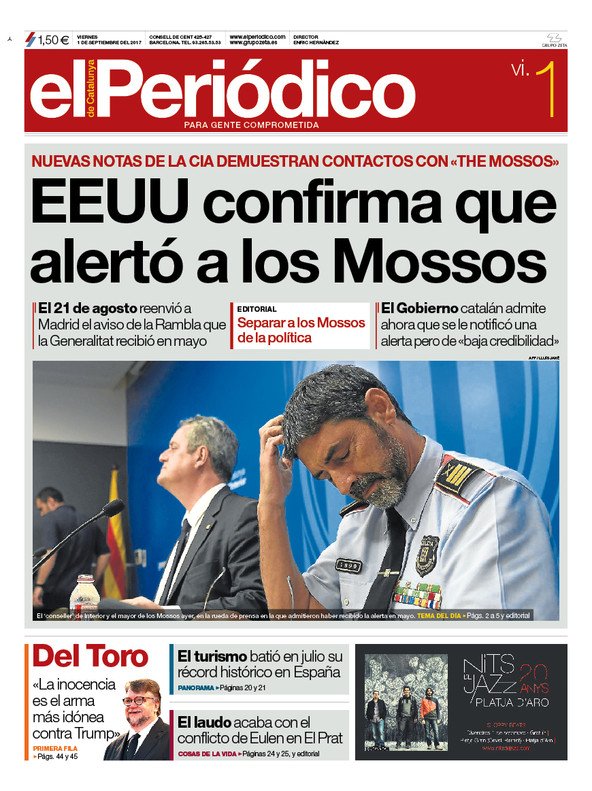