The Financial Times has reported this Tuesday that "the worst fears of investors and business leaders" over the Catalan independence push "have not come to pass" and that the economic situation now appears "much rosier than it did".

The article quotes economists and business leaders saying that the overall effect "has actually been pretty limited". The found of classified ads group Wallapop, Agustín Gómez, for example, tell the newspaper that "it is not affecting [his company] at all" and that, although "it’s a big deal for Catalan society", it's not for their business or their view of the business.

The reporter also spoke with Santiago Aguirre, chairman of property consultancy Savills Aguirre Newman, who is “confident that companies are not worried about the political troubles” based on the demand for office space. 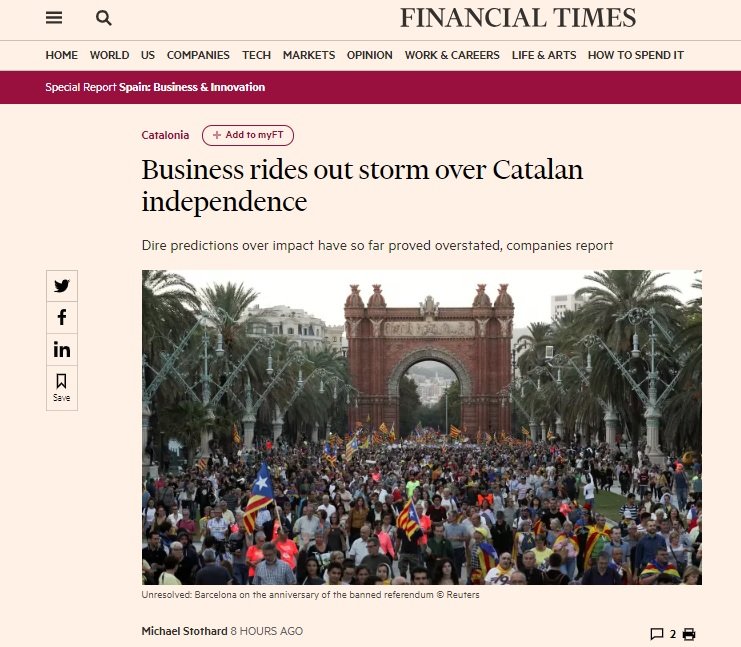 The Financial Times article on the Catalan economy / ACN

"Foreign companies do not seem too worried about the situation", they write, noting that Microsoft, Siemens, Amazon, Nestlé, Facebook, Allianz, Oracle, Media Markt and Lidl have all invested in Barcelona in the last twelve months.

The place they do report an economic impact is on the tourism sector. They suggest that images of violence used by police against last year's referendum have discouraged some potential visitors. "The truth is Barcelona is incredibly peaceful, but a few images have hurt the city’s reputation," a hotel executive says. They also note there are other possible causes, for example last summer's terrorist attack.