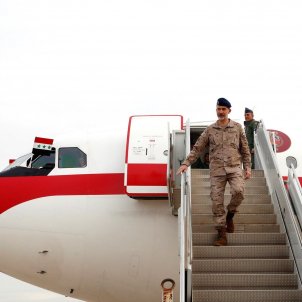 Spanish king Felipe VI made a surprise visit to Spanish troops in Iraq today, his 51st birthday, accompanied by Spanish defence minister Margarita Robles and various senior officers. Unfortunately, barely had his plane landed in Baghdad before his team made its first serious blunder.

On arrival, the king's plane was waving two flags out of its windows: a Spanish flag on the right, and an Iraqi flag on the left. The Iraqi flag they used, however, wasn't the current version, but dated to the former Ba'athist regime, which ruled the country from 1968 to 2003. That version has a horizontal tricolour in red, white and black, with three green stars in the middle.

That flag was used until 1991, when Saddam Hussein added the takbīr, the phrase "God is great" in Arabic, between the stars. After the dictator was overthrown, the US-appointed interim government changed the font of the writing, before the stars were removed in 2008.

The error was spotted quickly by Iraqis and pointed out by local media and people online. The Spanish embassy in the country publicly apologised via Twitter. In a tweet including the correct flag, they attributed the error to the plane's pilots and said that it will be rectified for when the king leaves, which is expected to be this evening.

Translation: "We offer sincere apologies for the error our pilots committed this morning... This error will be corrected for this afternoon's departure. Meanwhile, the historic visit is going excellently."

The English-language service of Kurdish broadcaster Kurdistan 24 reported on the "unfortunate oversight", whilst one of its hosts exclaimed about "what's happening in Iraq". One of his colleagues labelled it a "big mistake". Experts and analysts also questioned the king's choice to disembark the plane already in military uniform.

In what appears to be an unfortunate oversight, the Iraqi flag of the former Baathist government was displayed along with the Spanish flag as King Felipe stepped off his plane. #TwitterKurds #Iraq #Spainhttps://t.co/orqULf69aH

King Felipe VI of #Spain arrived #Iraq in the first visit by a Spanish monarch in 4 decades ||| He arrived wearing #military uniform and his plane decorated! by the flag of former #Baath regime! Funny & surprising! What’s going on in Iraq! pic.twitter.com/3D317skYuS

The plane of Spain's King Felipe VI in a first trip by a Spanish monarch to Iraq in 4 decades raised the 40 year old Iraqi flag after landing! pic.twitter.com/nLBPebqcDK

The king of #Spain visits #Baghdad and
1- He wears the military uniform.
2- The plane puts the old flag of #Iraq #spain_in_Iraq pic.twitter.com/hWReIt8f5q

The King of #Spain Felipe VI paid a surprise visit to #Iraq to visit Spanish troops stationed there, In what appears to be an unfortunate oversight, the Iraqi flag of the former #Baath government was displayed along with the Spanish flag as King Felipe VI stepped off his plane pic.twitter.com/kVHEf4UXJ7

The king's military uniform and the Iraqi flag on the plane that is the former under Saddam Hussein pic.twitter.com/z3qdhN7X9R

After getting of his plane, the king continued his agenda: meeting Spanish troops in the country and the president of Iraq, Barham Salih. The troops, part of the NATO mission against Islamic State sang Cumpleaños Feliz ("Happy Birthday") to the monarch before he left. 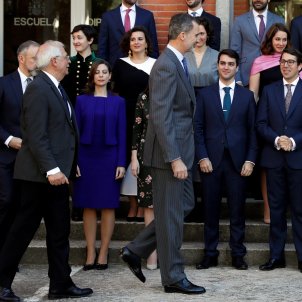