'FAZ' on the Spanish far right: "The enemy is in Catalonia"

Germany's largest centre-right paper, Frankfurter Allgemeine, has reported on the growing Spanish far right, emphasising the anti-Catalan stance that fuels it. "The enemy is in Catalonia," reads their headline.

FAZ reports that Spain is seeing growing radical right-wing populism, headed by the party Vox. They see its Spanish nationalism as differentiating it from its fellow far-right phenomena around Europe: "It's an unusual right-wing populism: Santiago Abascal is bothered more by the autonomous communities than immigrants". 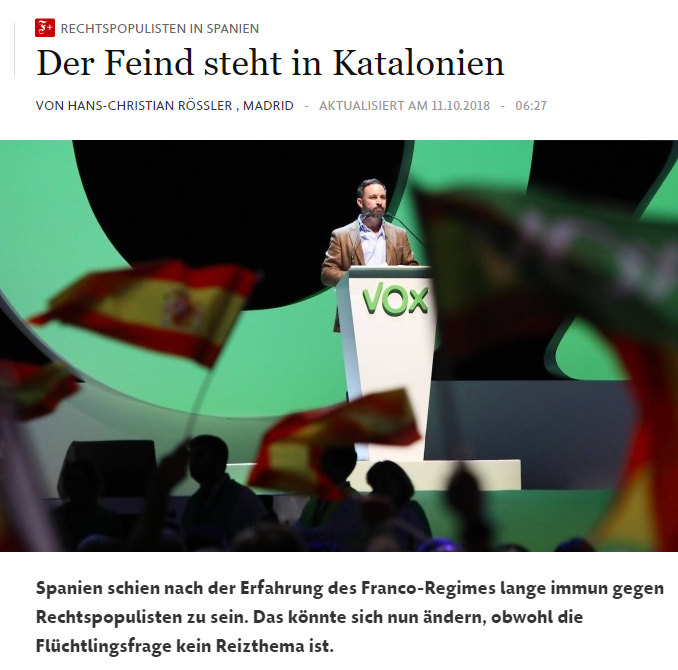 The newspaper describes the party as feeling "strong since the change of government" in Madrid, and says that "since it was founded in 2014, the small party had never brought together so many supporters in the Spanish capital", as it did this Saturday. Giving historical context to this upsurge, they note that "Spain long seemed to be immune to right-wing populism since the experience of the Franco regime. That could now change, although the question of refugees is no explosive topic". In many other countries, immigrants and refugees lie at the core of far-right rhetoric.

The correspondent describes the rally Vox held in Madrid last weekend. He says the moment that got the greatest reaction in the arena was when the image of the Catalan president in exile, Carles Puigdemont, appeared on the main screen: "and the crowd started to shout 'Puigdemont to prison'".