The Catalan health ministry is preparing a plan for the gradual reopening of sectors affected by the coronavirus restrictions. After confirming this Thursday that the current measures are to be extended for another ten days, health minister Alba Vergés explained that the government is working on a proposal with the affected sectors to be implemented "progressively" from November 23rd onwards.

These measures, Vergés explained, will be applied, in the first place, to "the return of activities with least risk in terms of the epidemic, which are those that can take place outdoors, including bar and restaurant terraces".

Reopening assured, "whatever the situation"

The public health secretary, Josep Maria Argimon, who today made his return to Procicat press appearances after being admitted to hospital with Covid-19, went further and guaranteed that on the 23rd all open-air activity will reopen, "whatever the situation of the indicators."

Vergés explained the extension of the restrictions for another ten days due to the need to "be able to consolidate" the downward curve and overcome the second wave of the pandemic.

The Catalan government adopted this decision the day after internal tension became visible following the call by enterprise minister Ramon Tremosa to relax the restrictions on the affected sectors and reopen the bar and restaurants terraces at lunchtimes. "The entire government is working hard to find a balance between the need to maintain good control of the epidemic, and to achieve our goals for the vitality of the country," said Vergés when questioned about the internal debate. 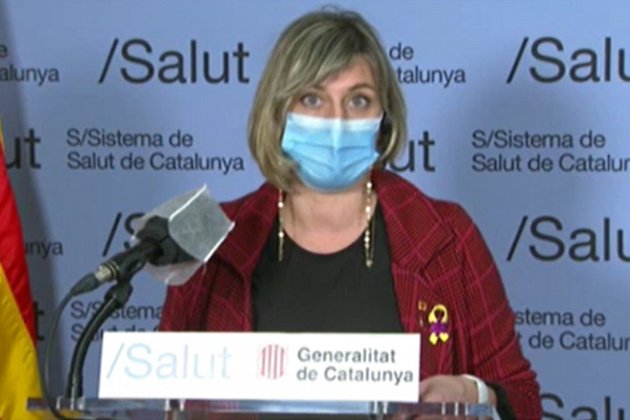 The minister also confirmed one measure that will be eased immediately: the restrictions on business premises such as beauty salons and massage centres, which have faced measures because of the close physical contact involved in their work. They will now be able to provide individual services.

She also announced a new limitation on the size of religious gatherings, limiting attendance in places of worship to an absolute figure of 100 people, in addition to the current limit to 30% of normal maximum capacity. This restriction is adopted after the controversy caused by the ceremony held last weekend at the Sagrada Famìlia in Barcelona, when 600 people attended a special mass.

With the extension of the current measures restricting many businesses and activities, the nighttime curfew and limits on weekend mobility are also extended.

When asked about the reason for maintaining the restrictions on the activity of bars and restaurants, in contrast to the situation in places such as Madrid, Argimon explained that most European countries have closed the hospitality sector and admitted that he did not know how the pandemic is being contained in Madrid despite these activities being allowed to remain open.

In this regard, while admitting that the Spanish capital's Covid indicators have been falling for three weeks and its hospital situation has stabilized, the public health secretary stressed that the number of people admitted to intensive care in the Madrid region is very similar to that of Catalonia, when the pandemic wave erupted three weeks earlier. Regarding the use of antigen tests, he explained that in the Community of Madrid, 50,000 PCR and 120,000 antigen tests are being performed - that is, 170,000 weekly tests in total - while in Catalonia the weekly figure is currently 250,000 - made up of 190,000 PCR and 60,000 antigen tests, which are used in places where the highest incidence of the virus is found. “Those figures aren't the explanation, either,” he stated.

Argimon called for the public to play its part, and appealed to the most affected sectors. “We need these ten days,” he assured. The public health head admitted that the number of patients in hospitals is stabilizing and this will have a flow-on effect of gradually reducing the number of people in intensive care, but there are still 600 intensive care places filled with Covid patients in Catalonia.

And that figure, 600, "is the total number of ICU beds that Catalonia had before the pandemic began. Following the WHO recommendation, a strategic reserve of 300 more places was created, but every ICU bed has implications for ventilators, monitoring and staff ratios. We have obviously increased the number of beds, but we don't have 30% more for intensive care," he admitted.