UK delivers another blow to Spain, advising against travel to Balearics and Canaries

After applying a mandatory 14-day quarantine to all travellers returning from Spain, the UK government has now spelt out that British holidaymakers should not travel to the Balearic or Canary Islands. According to the "current assessment of Covid-19 risks in the country" made on Monday afternoon, the Foreign Office has extended its advice not to travel to Spain if it is not essential - a recommendation which until this afternoon was still up in the air with regard to Spain's two offshore archipelagos.

This news, released by Reuters, arrives just hours after media reports said that British foreign and transport ministers were reviewing their policy on British holiday travel to the two island groups. Transport secretary Grant Shapps went as far as opening the door to an omission of the quarantine for tourists returning from the Balearics, but it seems that the more restrictive position of foreign secretary Dominic Raab carried the day.

Accordingly, the UK government updated its travel recommendations on Monday and advised that all non-essential travel to Spain, including to the Canary and Balearic Islands, should be avoided due to the "risks" posed by the situation of the coronavirus pandemic in the country. "This advice is based on evidence of increases in Covid-19 cases in many regions, particularly in Aragon, Navarra and Catalonia," said the UK government statement. 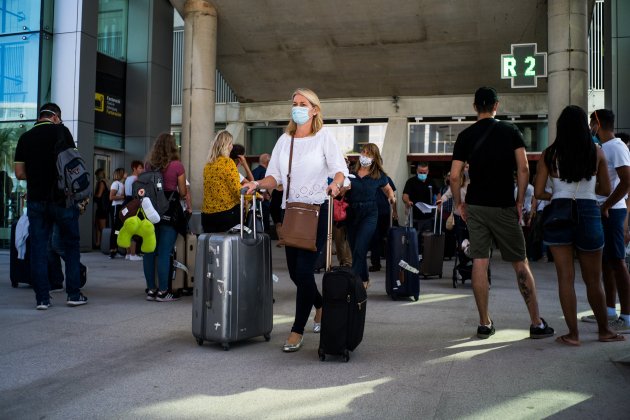 The UK advice specifically adds that British tourists who are already in Spain should not return immediately. Rather, visiting British nationals are informed that they should "follow the advice of local authorities on how to best protect themselves and others, including any measures they bring in to control the virus". Nevertheless, the message also reiterated that those who return from Spain will have complete fourteen days of "self-isolation".

"Some Spanish destinations are safer than the UK"

This latest recommendation from the Boris Johnson government completely ignores the requests made by Pedro Sánchez's Spanish executive, which asked the UK authorities to reconsider the measure. Spanish tourism minister Reyes Maroto said today that the Spanish government was considering creating safe corridors between the United Kingdom and the Balearic Islands. Foreign minister Arancha González Laya spoke out on Sunday in response to the initial announcement, defending that "Spain is a safe country" and asserting that negotiations with London were underway to exempt the Canary and Balearic Islands from the quarantine. "The situation in Spain is under control," said González Laya.

On Monday evening, Pedro Sánchez counterattacked, describing the UK's decision as "unbalanced". He stressed that the incidence of coronavirus in Spain is concentrated in Aragon and Catalonia. "It would be safer to be in some Spanish destinations than in the United Kingdom," said the Spanish prime minister.

In an interview with TV network Telecinco, Sánchez regretted the quarantine imposed by London and affirmed that his government would continue working to have the policy reversed. "64.5% of those newly infected are concentrated in two territories," he noted. "In most of the country the incidence is even lower than the figures reported in the United Kingdom," he said. The cumulative incidence in Spain is "below the European and even British average". He recalled that the tourism sector has made a great effort in recent months.

Meanwhile, the Spanish tourism sector had also raised its voice. The UK move is an "absolutely unforeseen" reaction that could have a "devastating" effect on the tourism sector, said José Luis Zoreda, executive vice-president of the Alliance for Tourism Excellence (Exceltur), estimating losses of up to 8.7 billion euros.

Main image: A rarely-seen view of Maspalomas Beach, in Gran Canaria, with virtually no tourists. / EFE