Stay Homas, musicians on a Barcelona terrace with a surprise lockdown hit

On a rooftop terrace in Barcelona, with a guitar and some improvised percussion, three young guys, dressed to stay inside, sing songs about doing just that. They are the Stay Homas and, in these days of coronavirus confinement, they've found themselves with a lockdown hit which has literally gone through the roof.

They are Guillem Boltó, of the Catalan group Doctor Prats, and Klaus Stroink and Rai Benet, of Buhos (among others), and have formed the group Stay Homas. They live together and are thus in lockdown together. In four days they've gathered more than 60,000 followers on Instagram and thousands of views on their YouTube channel videos. They've been putting together songs from different genres on the day-to-day lockdown routine, now into day 13 in Catalonia.  Their lyrics mix Catalan, Spanish and English, with a touch of humour and almost always with a guest artist via  video.

Reposting our 2nd song from last week! It’s crazy how far this has arrived! STAY HOMA❤️

"Let's make a song out of lockdown"

"It began a little bit by accident, sometimes we just pick up the guitar and play," says Guillem Boltó, interviewed by ElNacional.cat. "We once burned a pizza in the oven and wrote a song about it - and that was kind of the same thing. So now, we were having an aperitivo on our terrace and we said, 'Come on, let's write a lockdown song' and it kind of slipped out of our hands." They recorded the song and uploaded it to their personal social media networks, receiving an immediate wave of listens and requests for more tunes. A week later, the group has its own accounts on social media. 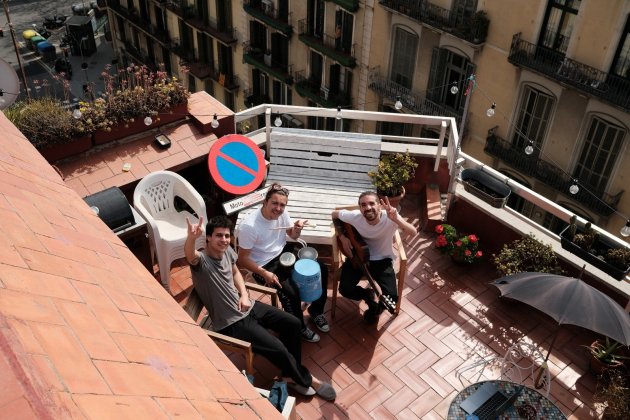 "Sometimes," they say, "an idea will come up and by the next day we'll try to have more or less thought about what we'll do" -  especially in terms of organizing a special guest to take part via the internet. "But we do it on the fly," say the Stay Homas. Different artists from the Catalan music scene have participated in their songs, each with the style that characterizes them. Judit Neddermann, María José Llergo, Josep Montero (Oques Grasses) and Panxo (Zoo) have all paid a strictly-virtual visit to the Stay Homas' rooftop.

From one day to the next

The three roommates' videos quickly went viral. "És molt heavy", explains Boltó, "we're doing this without any intention." They are surprised that in less than two weeks their messages and songs have reached "even the other side of the puddle, this is just boig".

One of the superspreaders who shared their videos was singer Michael Bublé, who asked his Twitter followers to help identify the three singers:

A friend from Argentina sent this to me. I don’t know who they are but it put a smile on my face and I hope it does the same for you! If you know who this is, please let me know in the replies! pic.twitter.com/CFDEBuFvy0

The three roommates have collaborated on some specific projects together previously, but never as a band. They talk about the possibility of doing something together when lockdown ends, perhaps for very practical reasons as well: "We don't know if we'll do a record, a concert, a tour or whether that will stop us from being poor".

At the moment, what we do know is that Stay Homas have brought a smile to thousands who have heard them in these days of lockdown. Music to reduce the stress of this Covid-19 confinement - and an inspiration to the bedroom musician in us all.