The newspaper of the German medical profession, Ärzte Zeitung, has been horrified by what happened in nursing homes in Spain during the coronavirus epidemic, with tragedy that exceeded any other European country. In a devastating headline, the newspaper asks bluntly: "Did Spain deliberately let its old people die of coronavirus?" (link in German)

"In no other country in Europe have so many people died of Covid-19 in nursing homes as in Spain. Of the total of 27,100 victims of coronavirus in Spain, more than 19,500 have been victims in nursing homes," says the article, which expresses no surprise in the fact that, as a consequence, 4,000 families have taken legal action for what has happened.

The newspaper quotes a witness, named Beatriz, who says that Hospital Severo Ochoa, in Madrid, did not accept her mother even though she was suffering from severe coronavirus symptoms, "because they were not accepting people over 75 with serious pre-existing conditions." The elderly woman died alone in her room at the Domus VI residence on March 24th, explained her daughter. 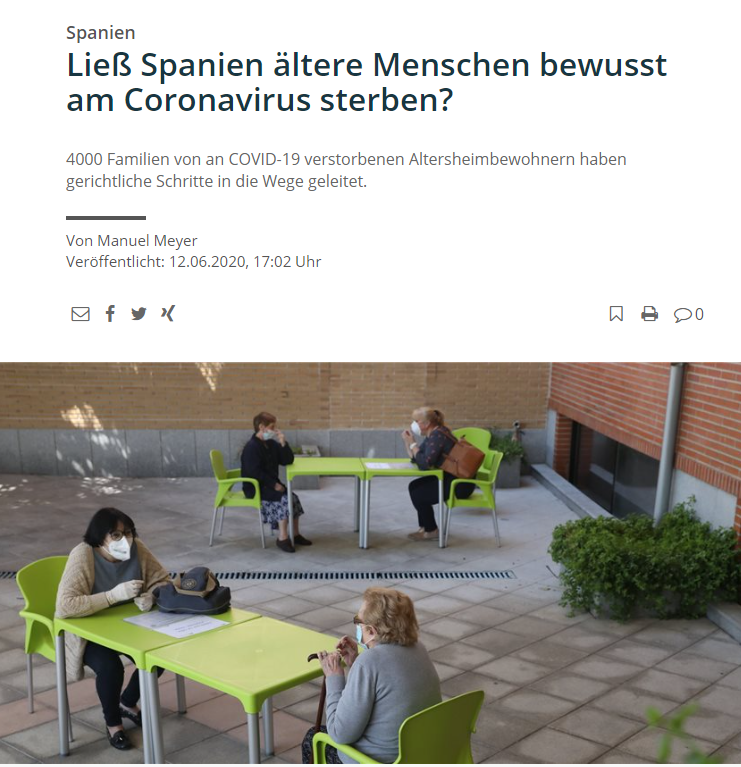 "This is not an isolated case," says Ärzte Zeitung. "Around 4,000 families of elderly people who were in residential centres and died from Covid-19 have initiated legal proceedings. Because a widespread suspicion is growing. Did they deliberately allow coronavirus to kill residents in nursing homes in Spain?"

The article also includes statements from the president of the Spanish Patient Protection Association, Carmen Flores, who has asked prosecutors to investigate. "Denying people medical treatment is a crime in Spain," she stated. And the president of the largest Spanish association of private residences, CEAP, Cinta Pascual, added: "We felt totally impotent. People were dying and there was nothing we could do about it. We are not hospitals, we have no doctors. Hospitals refused to accept residents from our nursing home by order of the health authorities. They didn't give us respirators, oxygen, tests or protective equipment. They left us all alone," she said.