Civil Guard report against Committees for Defence of the Republic: zero violence

Spain's Civil Guard gendarmerie is investigating Catalonia's Committees for Defence of the Republic (CDR), dedicating a whole new report to them: 140 pages and no sign of violence.

As part of his investigation into last year's Catalan referendum at Spain's Supreme Court, judge Pablo Llarena needs proof of violence, part of the definition of the crime of rebellion with which he has charged most of the Catalan government, the former speaker of the Catalan Parliament and others. And what would be logical -no violence, no rebellion- takes on a new dimension in Llarena's indictments and the interpretations made of what is violence and what is a violent act. And although there was never any uprising involving the suspects, all the investigations are based around whether it can be shown there was violence in one way or another. So the dents in Civil Guard cars on 20th September as officers searched the Catalan economy department are violence, and it seems that the CDRs's actions are violence too.

The secret weapon to prove violence is this report based, above all, on press clippings and articles detailing three meetings around Catalonia which, according to the Civil Guard, are key: one in Sabadell on 14th October, one in Igualada on 21st October and one in Manlleu on 4th November.

In the whole report, however, there is no proof there was violence. In fact, the Civil Guard themselves admit that "in their strategy they apply non-violent civil disobedience and resistance, both active and passive". The document aims to respond to Llarena about specific actions by the CDRs and "their intervention in the political process undertaken to promote the independence of Catalonia" and "to inform about the people in charge of these committees". The Civil Guard include an interview with the head of the CDR for Barcelona's Sants neighbourhood in which they only talk of "peaceful response" and reaching independence through dialogue: "we have to work together". They add: "the main problem is that the Spanish state doesn't accept the Catalan government as a negotiation partner, because from the moment they accept conversations, then it would recognise it as a political subject".

Besides the numerous occasions the report talks of "non-violent resistance", it also talks of secrecy. The document says that the CDRs act secretly, but the whole report is a collection of tweets posted by different CDRs and news stories published in the media about event plans and agreements reached during meetings. In fact, it's through statements to the media that the Civil Guard find out about the actions they call clandestine, like Operació Fronteres (Operation Borders) to block roads with peaceful resistance; the system of communications via the applications Telegram, Signal and WhatsApp, through which they summon "people of all ages", and the Twitter account @CDRCatOficial, which gives pointers as to the actions to take.

The Civil Guard, in fact, use radio interviews and newspaper articles to describe the whole organisational structure of the CDR, based on public assemblies spread around the country. The police compare it with Syrian Kurdistan. 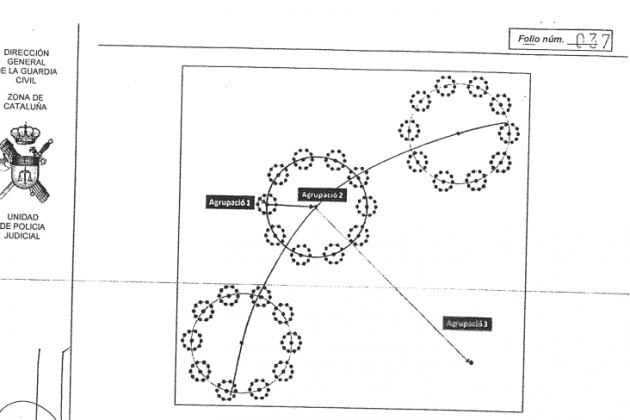 Piggybanks, parties and drinks on a Sunday

The report describes the system financing the CDRs, listing various activities including collection boxes, aperitifs on Sundays, festive cultural activities to raise awareness of the CDRs and produce baskets, besides the caixa de resistència (resistance fund).

"Here is shown the CDRs' ability to find funding to continue keeping themselves going as an organisations and to carry out all their actions aimed at defending the republic", conclude the Civil Guard.

The presentation of the organisation En peu de pau (On the peace path), which promotes peaceful resistance, helps the Civil Guard to identify those who they believe are in charge of the CDRs. But the report goes further, describing all En peu de pau's activities, a long list of their workshops.

The list of those they believe in charge, meanwhile, goes from Rubén Wagensberg, David Fernández and Antonio Baños, to representatives of other pro-independence organisations like Marcel Mauri and Joan Vallvé of Òmnium Cultural; Jordi Armadans of Fundipau; Eduard Vallory of Unesco; Ariadna Isem of ANC, and representatives of the Federació Catalana d'Escultisme, port workers and the CSC union group. In total, 22 people, many of whom have given interviews to the media.