The creation of the Catalan Digital Republic, as envisioned by minister Puigneró

Power and the Catalan Republic: these are the two concepts that preside over a new book written by Catalan digital policies minister, Jordi Puigneró, whose pre-publication contents ElNacional.cat has had access to. The Catalan minister  - and possible future candidate to lead the JxCat party - has entitled the work El cinquè poder. La república digital a les teves mans - "The Fifth Power. The digital republic in your hands". The "power" of the title refers to “the political will to empower citizens", which, he says, is "the essence of what a Digital Republic consists of”.

“When I started talking about the Digital Republic two years ago, most people looked at me in disbelief: I was called a geek and a dreamer, sometimes even in the Catalan Parliament,” he recalls.

Nevertheless, Puigneró asserts that thanks to digital media, every citizen today has "the most power that a single person has ever had." With one click, you can talk to someone on the other side of the world, you can make a purchase, you can access all kinds of information content, and, he adds, "soon, with a click you'll also be able to vote."

Puigneró was responsible for coining the term Digital Republic, which JxCat presented as one of its main campaign catchphrases in the Catalan election of 2017. The idea had protagonism in the first press conference of the campaign in which the party's candidate Carles Puigdemont, speaking from Waterloo in Belgium, was accompanied by Puigneró, who joined him from a modest basement office in Barcelona's Gràcia district.

It had been just over two months since the 1st October independence referendum and Catalonia was under the shackles of Article 155 - direct rule from Madrid - but the digital world offered room to move without getting snarled on the limits placed by a state which is essentially analogue. JxCat’s programme proposed turning Catalonia into “the first digital native republic, the eRepublic, a digital and intelligent nation of international reference”. There was talk of a self-managed Catalan digital identity, of digital empowerment of citizens... ideas which after the elections were incorporated into the government, where a specific digital policies ministry was created, and placed in the hands of Jordi Puigneró.

The alarms were thus set off in the Spanish state, to the point where Pedro Sánchez announced in autumn 2019 that his Spanish government had passed a decree against the Catalan digital republic. "The state will be as forceful in the real world as in the digital world," warned Sanchez after admitting the progress the Catalan government's project had made: "There will be no independence, offline or online. The social and democratic rule of law will be as strong as in the digital world as in the real world."

Society - including Spanish society - is not aware of how its rights are being violated on the internet. When they come to realize it, it will be too late

This digital decree by the Sánchez government, which Puigneró describes as a “digital gag law”, is one of the issues addressed in the book. "I have the feeling that society - including Spanish society - is not aware of how its rights are being violated on the internet. When they come to realize it, it will be too late", warns the minister, who recalls that the decree was tailor-made to clamp down on Catalonia, allowing the state to intervene in communications and close the internet without a court order or prohibit public bodies - except for its administration at the level of the Spanish state - from developing projects in technologies such as blockchain.

"With this decree, approved without Spanish parliamentary debate, with no ability to make amendments and during an election campaign, the Spanish government proclaimed itself judge and jury: based on some general assumptions (security, public order, effects on the economy), it can decide, without seeking an order from any judge, to intervene in communications, close websites and apps and even cut off the internet. That's not an exaggeration: in Spain it's now the law. Like Turkey, China, Iran. A select club of great democracies ", he warns.

The Spanish government has proclaimed itself judge and jury. It can intervene in communications, close websites and apps and even cut off the internet. In Spain that is now the law. Like Turkey, China, or Iran

The minister denounces that this decree is designed to "curb Catalonia's innovative aspirations" and he concludes: "For that reason, once again, I hope that this digital gag law, custom-built to act against Catalans, will cease to be applied to us and that it takes us away from here, to another state, a state of its own that does not see the digital world as a threat but as an opportunity to make a better state”.

In the book, Puigneró does not shy away from talking about Catalonia's political prisoners and exiles, nor about the goal that he set himself when he agreed to enter the government. "We are on a difficult path and there are many who are paying a very high price. We must be worthy of the debt we owe", he warns. He admits his desire to focus on his role within the government and to isolate himself from "external noise and politicization", but above all he asserts: "my job has not been to create an autonomous community 2.0".

"If this had been the case, I would not have agreed to be a minister. Spain's state of autonomous communities was useful as long as the state respected that regime. But it is the state that destroyed that system with its ruling on Catalonia's 2010 Statute, not the political catalanistes", he affirms.

Guaranteeing people's fundamental digital rights will open the door to the next step, the construction of the Catalan Digital Republic

In response to all of this, comes the proposal for the Catalan Digital Republic, which, according to the minister, must be built on the "three fundamental digital rights": connectivity, cybersecurity and digital identity. Guaranteeing all three will allow people to be "full-fledged digital subjects", that is, "human beings in the digital version". Thus a digital society will be created and this, he concludes, will "open the door to the next step, the construction of the Catalan Digital Republic" itself.

Puigneró admits that this may seem like a episode of Black Mirror or Matrix. But, he says in the book, this is actually a sketch of the extent to which the digital world has transformed social and political life. Thus the emergence of what, in his opinion, is an "opportunity to imagine and build the Catalonia of the 21st century".

The prologue to The Fifth Power. The digital republic in your hands is by Toomas Hendrik Ilves, who was president of Estonia for 10 years until 2016, as it became one of the most advanced digital societies on the planet, and currently a teacher at Stanford University. The epilogue to the book is by the Catalan president in exile, Carles Puigdemont.

It is due for publication in July. 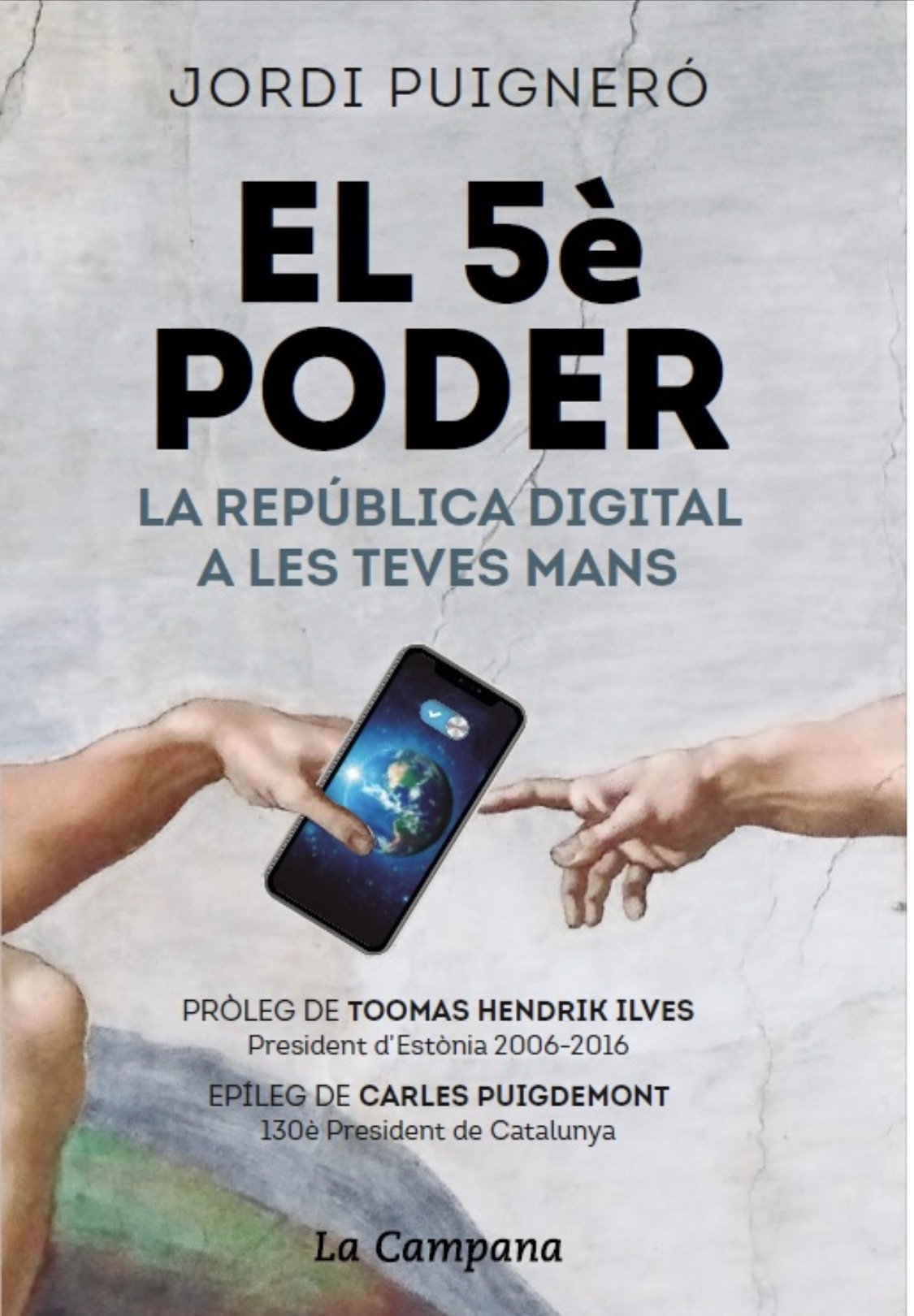