In the grip of the fifth wave of the pandemic, and with new infections and hospital admissions both soaring, Catalonia has entered the highest risk category on the map designed by the European Centre for Disease Prevention and Control (ECDC). Just a week ago the profusion of red in the Iberian peninsula defined Spain as the new epicentre of Covid in Europe. At that point, Catalan territory, like most of the Spanish state as well as Portugal, had surpassed an incidence of 150 cases per 100,000 inhabitants.

In today's update, Catalonia has changed to the dark red colour which indicates that its seven-day incidence (IA7) exceeds 500 cases as measured by the ECDC. The latest data from the Spanish ministry of health is 1,015 cases in 14 days (IA14). Entering this category of extreme alert implies that the European Union does not recommend travelling to the territory. 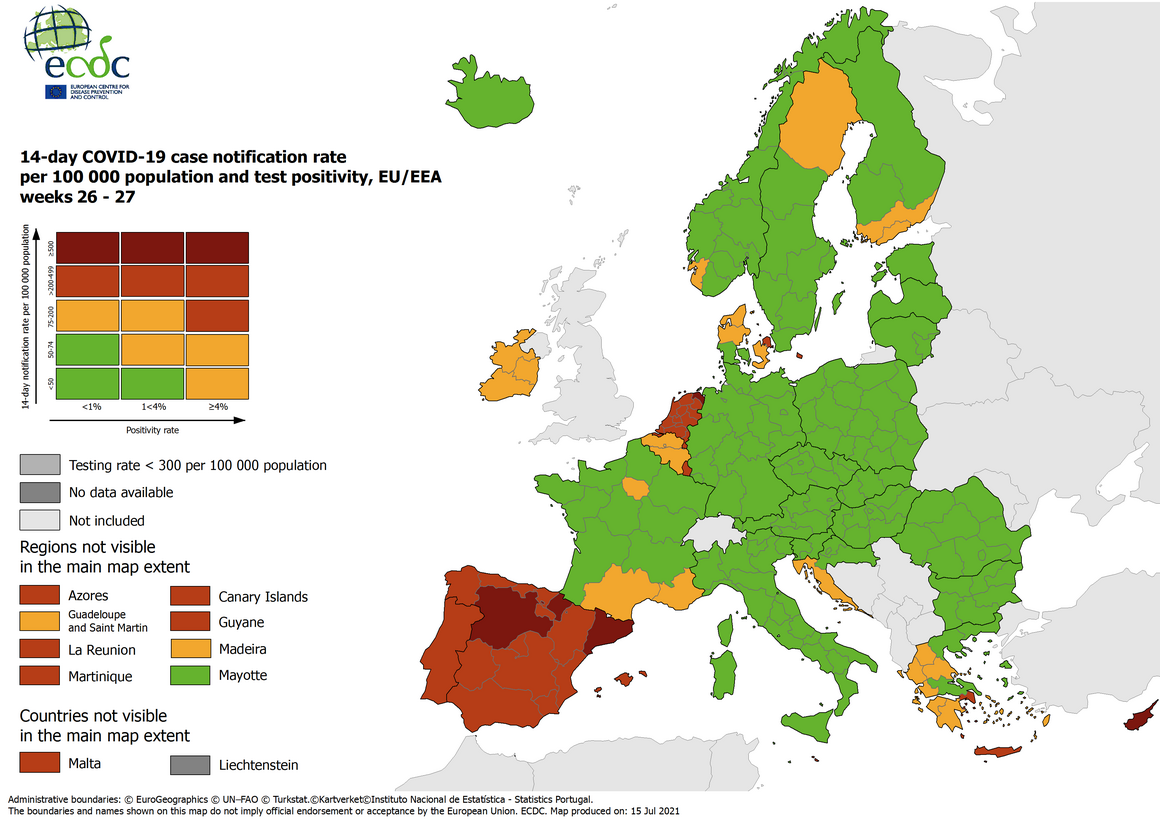 Catalonia is currently the third-most affected region in this fifth wave of the pandemic. According to the data used by the European body, which does not take into account the last few days, the Catalan Covid 14-day incidence is 722 cases per 100,000 inhabitants. Only Cyprus has a worse figure than this, with 1,126 cases, while the Algarve, in Portugal, has 795, although the map treats all of mainland Portugal as a single region.

The situation has also worsened in two other Spanish regions, Navarra and Castilla y León, which have also turned dark red with an IA14 of above 500 cases. The rest of the Spanish state remains in medium red. The map includes the 27 countries of the EU as well as Norway, Iceland and Liechtenstein.

Another study, in this case carried out by the German research centre Risklayer, using WHO data, colours Catalonia black as it exceeds an incidence of 500 cases in 7 days. This map, which includes additional states such as the UK, Switzerland, Turkey and Russia, ranks Catalonia as the fifth-worst  European region with an incidence of 574 in a week. The territories even harder hit are two areas of the UK, the island of Jersey (862) and North-East England (859), plus Cyprus (748) and the Dutch province of Groningen (626).

In this study, much of Spain is coloured in different shades of purple, indicating a seven-day incidence of between 200 and 500 cases, with red in less-affected territories. By contrast, most of central Europe remains green and yellow, indicating that so far those countries have been able to contain the contagions in this fifth wave.

The UK is mostly purple, indicating higher incidence of the virus, but nevertheless, prime minister Boris Johnson has announced that he is about to remove all current restrictions containing the pandemic. "The time has come to live with the virus," he says.

Curfew in Catalona to combat infections

Yesterday, the Catalan government decided to opt for a more forceful response to this latest coronavirus wave. It is currently waiting to hear from the Catalan High Court on the proposal to return to night-time curfew between 1am and 6am, in 161 Catalan municipalities of over 5,000 inhabitants which have the highest incidences, or are surrounded by other towns with high risk. Specifically, those where the cumulative incidence of the last week (IA7) is equal to or greater than 400 cases per 100,000 inhabitants. The measure, if approved by the judges, will affect more than 5 and a half million Catalans, about 80% of the population. Among the cities affected are the largest: Barcelona, ​​L'Hospitalet, Terrassa and Badalona.

The Constitutional Court has already endorsed the Generalitat government's first measures to slow down this Delta variant-driven surge. From this Thursday, these come into force, including a limit on the size of social gatherings to ten people, a complete closure of organized activities (bars, cultural events, sport, etc) at 12:30am and a ban on eating and drinking on the street.