Carme Forcadell, the speaker of the Catalan Parliament, is on her way to Barcelona. Her official car entered the prison in Alcalá Meco, driving up to the door of the women's wing, to preserve the privacy of the second highest authority in Catalonia and avoid the spectacle sought by the hundreds of media cameras waiting at the prison's doors.

The speaker's lawyer, Andreu van den Eyne, who had suffered through the crowd of journalists both entering and leaving, managed the entry of the official vehicle and its escort and chauffeur. This way Forcadell avoided walking to the door as prisoners normally do when being released.

Forcadell was in prison for 14 hours. She arrived at midnight and left shortly after 2pm, at full speed. Outside, an unmarked car from the Mossos d'Esquadra (Catalan police) was waiting to accompany the official car until it had left Madrid. Anna Simó, although she waited for the car to leave at some point away from the prison.

5 hours to process the release

Forcadell's lawyers were able to post bail early this morning. In fact, they already had the money, 150,000 euros (£133,000, $175,000), yesterday, but couldn't pay it because by the time the judge announced his decision no bank was open. Van den Eynde personally went to the Supreme Court to find out the account number to pay the money into. According to the pro-independence organisation ANC (Catalan National Assembly), the money came from their "solidarity fund", set up to support people who are fined or receive other financial penalties "within the framework of the independence process".

Once the payment was made, judge Pablo Llarena gave the order for Forcadell's release and sent a civil servant to take it to the prison. 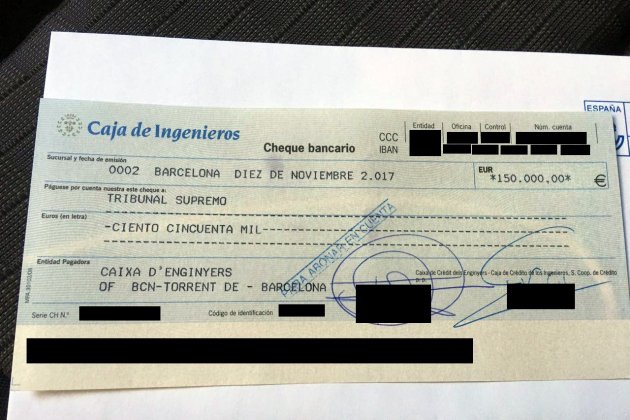 Forcadell slept in the prison which, since 2nd November, has held Catalan ministers Dolors Bassa and Meritxell Borràs.

She was taken from the Supreme Court in an unmarked car, with tinted windows. They gave her the option of changing her clothes in the court itself, and so remove her high heels and put on some more comfortable clothing.

As for the bail of 25,000 euros each for the members of the Parliament's Board, Lluís Guinó, Anna Simó, Ramona Barrufet and former deputy speaker Lluís Maria Corominas, the ANC has confirmed the money will come from the same solidarity fund. As for Joan Josep Nuet, the judge let him go free with no cautionary measure.

Once they have posted bail, all of them (except Nuet) will be prohibited from leaving Spain, will have to hand in their passport (the deadline is 2pm this Friday) and they will have to periodically sign in before a judge. They will also have to appear before the Supreme Court whenever they are summoned. The judge, in his release order, warned that not complying with any of these obligations will lead to their immediate incarceration.

The Public Prosecutor won't appeal Llarena's decision of preventive custody with bail of 150,000 euros for Forcadell and release with bail of 25,000 euros for the other four. In a press statement, they highlight that the accused have all either renounced "future political activity", or at least renounced any such activity "outside of the constitutional framework".