Catalan nightlife partially reopens, but there's not much jumping for joy

A long weekend is still ahead, but the timid and partial reopening of Catalonia's nightlife sector resulted in few venues open and sparse crowds on its first night. The new rules only allow night clubs and cocktail bars to open their outdoor spaces, only until three in the morning and without dancing, as the Procicat civil protection committee has decided. In Barcelona, five of the seventy spaces in the city have opened: those on the Passeig Marítim. "The reopening is so small that it will be insignificant. It will not be possible to counter the botellots - booze parties in the street - or offer an alternative for people to party," said the general secretary of Barcelona nightclub guild, Ramon Mas. In addition, the general secretary of sector association Fecasarm, Joaquim Boadas, rejected that this is even a "reopening", defining it as simply an "lengthening of hours" that "has arrived very late".

"Now, many venues will not be able to take advantage of the change because they have closed for the season and the weather is no longer good," added Boadas. He asserted that the curtailing of outdoor musical recreational activities that has been enforced throughout the summer has been "counterproductive" and has favoured the proliferation of botellots.

In the Catalan capital, the capacity of the late-night terraces that opened on Thursday "does not exceed 1,000 people", said Mas, who owns the Wolf Barcelona dance club. Apart from Barcelona discos, ​​the guild estimates that 5% of nightclubs in Catalonia overall have returned to activity, with openings also in Badalona, ​​Sant Cugat del Vallès and Mataró. "The big nightclubs in Catalonia have not opened," insisted the union's secretary general.

A few clubs open, 100 have closed for good

The people who came to the Barcelona sea front after midnight to go to one of the open-air nightclubs were mainly students and tourists and many did so without even knowing about the new hours.

On the Barcelona seafront, the nightlife venues placed tables and chairs at a distance of a metre and a half from each other and served drinks until three in the morning. Although dancing is not allowed, there were some people who could not be resist, although the staff immediately reminded them of the rules. 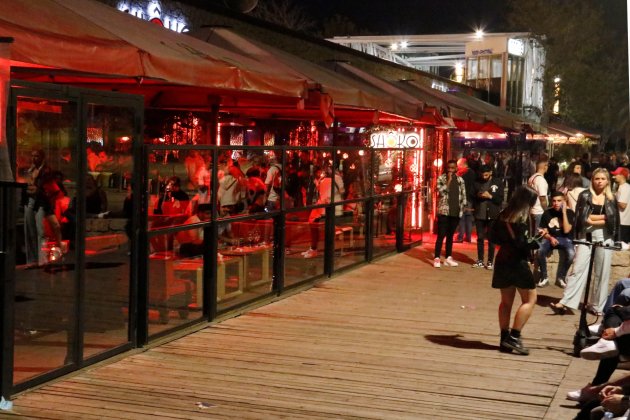 A nightclub in Barceloneta / ACN

Nightclubs have been closed since the fifth wave of cases exploded in late June, following an attempt to reopen the sector that lasted less than three weeks.

Now, the sector wants to resume activity in interior spaces around October 15th and is negotiating with the Government on the conditions under which it could do so. "It is absolutely necessary to reopen indoor activities safely and with a protocol," said Boadas, who proposes to use an app to check that clients are in one of three categories: they have  recovered from Covid, have a negative test result or have been fully vaccinated.

The owners of the premises demand the ability to reopen their dance floors, with their normal hours - that is, until six in the morning - and with the Covid passport implemented as a health measure. Representatives of the sector were due to meet this Thursday with the Catalan interior ministry to discuss positions on the future reopening of indoor spaces in nightlife venues. "The idea is to open and not then close. To carry out the opening in a way that it doesn't requires another move backwards," added Mas.

The sector has lost millions of euros since the beginning of the pandemic, as a result of having to deal with rents from 7,000 to 80,000 euros per venue, and utility costs, such as electricity, of up to 5,000 euros a month due to the high potential contracted. "Nightclubs have an average monthly cost of 30,000 euros, but in some cases it is 100,000 euros," said Mas, who called on the Catalan government to activate another assistance measure to compensate for the last hundred days that the sector has been closed by administrative decree.