Some 150 lawyers have this Saturday taken part in a demonstration called by the Coordinació d'Advocats per Catalunya (Coordination of Lawyers of Catalonia) to call for the release of the political prisoners. Their starting point was the doors of the Council of Catalan Lawyers, just opposite the building of the Spanish government's delegation in Barcelona, with strong police protection.

The demonstration was headed by a banner with the slogan "Justice, democracy and freedom". Under this umbrella gathered group like Drets (an "association of legal professionals which was born to defend Catalan society) and the bar associations of the cities of Terrassa and Vic, who carried their own banner bearing the image of the imprisoned Justice minister, Carles Mundó, from Vic.

As they passed in front of the Justice ministry, a block away from Barcelona's famous plaça Catalunya, the lawyers gave shouts of "you're not alone", referring to the prisoners in Madrid. Other chants included "we lawyers will always be yours" and "there are no rights". 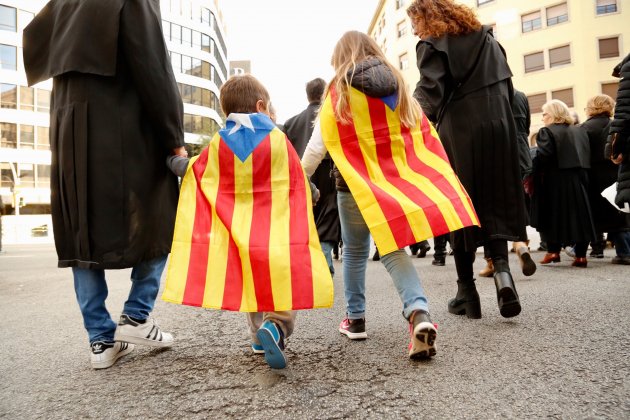 This group had already been responsible for another demonstration, again in togas, in front of the Supreme Court of Justice of Catalonia three days before the 1st October referendum.